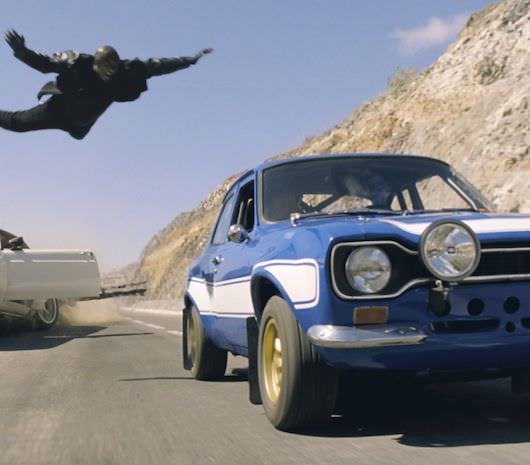 If a stunt driver pulls off the craziest maneuver in movie history and there wasn’t a camera to catch it, did it actually happen? No offense to the bulging biceps of Vin Diesel or Dwayne Johnson, but all that adrenaline-soaked action is the real star of The Fast & Furious 6—and it would never make it to the big screen without camera car driver Allan Padelford.

A veteran of the last three Fast & Furious films, Padelford’s job sounds simple: drive alongside (or behind, or in front) of the action and catch it on film as actors hang from cars and tanks crush highway dividers. But the execution is another story. He and his team of cars must drive in synchronized formation like ground-level Blue Angels, capturing all of the complicated, costly effects without getting into a fiery wreck.

Padelford, who has helped Ryan Gosling pull of playing a motorcycle-riding badass in Drive and been a key cog of every Quentin Tarantino movie since Deathproof, called from the set of the 2014 blockbuster Captain America: The Winter Soldier to walk us through the cameras and equipment of Fast 6. 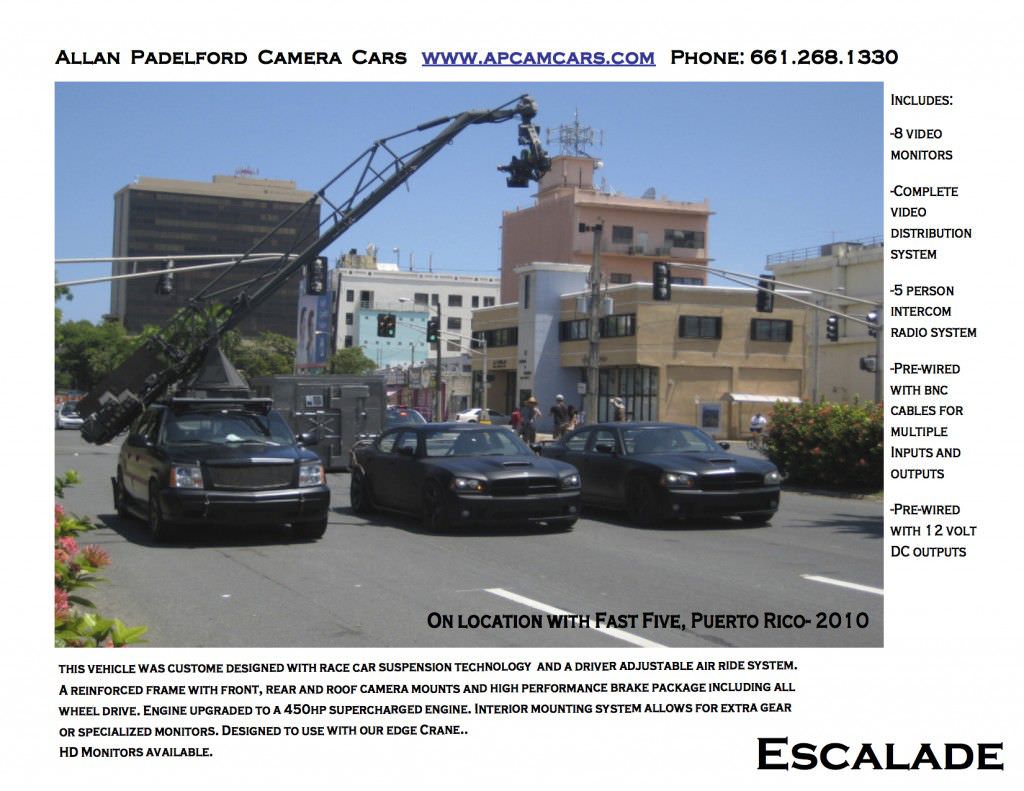 “That’s the main storytelling piece of equipment,” says Padelford of his Escalade, which has been custom designed with racecar suspension and front, rear and roof camera mounts. When Fast 6 stunt coordinator Spiro Razatos needed to capture a tank as it crushed the center divider of a highway and ran over two cars, this ride—with an arm that can extend to 26 feet—got the call.

Inside, five men work as one choreographed unit. “It’s a four-man team effort with the director in there giving us last-minute information on what to get,” Padelford explains. “I’m steering the vehicle so the crane can get into position, the crane operator swings the crane to where it needs to be, the camera operator points the camera and then the focus puller focuses the camera to get the shot. And that can all be happening at 70 or 80 miles an hour with things flying through the air.”

For those times when a scene isn’t shot at such reckless speeds—a rarity in the Fast & Furious franchise—the team will use side angles to create the illusion of more speed. Says Padelford: “If we can’t go as fast as we want to go, we use the motion of the arm to give it more action.” 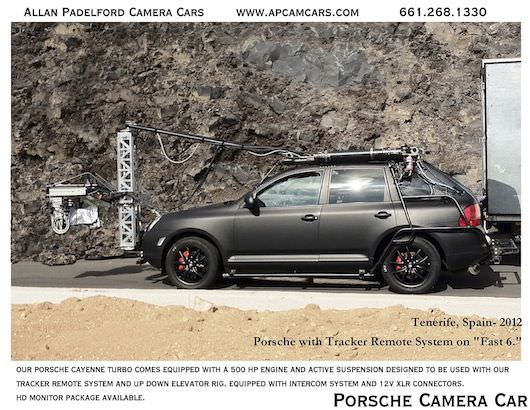 As the Crane Car films the over-arching story of a chase scene, the Camera Car (a Porsche Cayenne Turbo) shoots simultaneously to fill what Padelford calls the “action-y beats” that come in between. “That’s for the shots that are more down and dirty,” he explains. “I might be behind the action and, but the Tracker is on the side, shooting in tight on faces and the action that’s happening. The elevator rig can go from ground level to over the hood in about two seconds, so it gives it a lot of energy.”

Take, for instance, a scene in Fast 6 when a female character is hanging onto the side of a Jeep trying to attack the driver. Padelford’s Crane Car shoots the action from a high angle to capture the other cars zooming by, while the Porsche, driving next to it, zooms in on the struggle between the two characters. “We call it a two-fer,” says Padelford. “Basically, we’re shooting a wide shot of the action and the Tracker is shooting a tight shot.” If one car accidentally gets the other in its shot, it can be taken out in post. 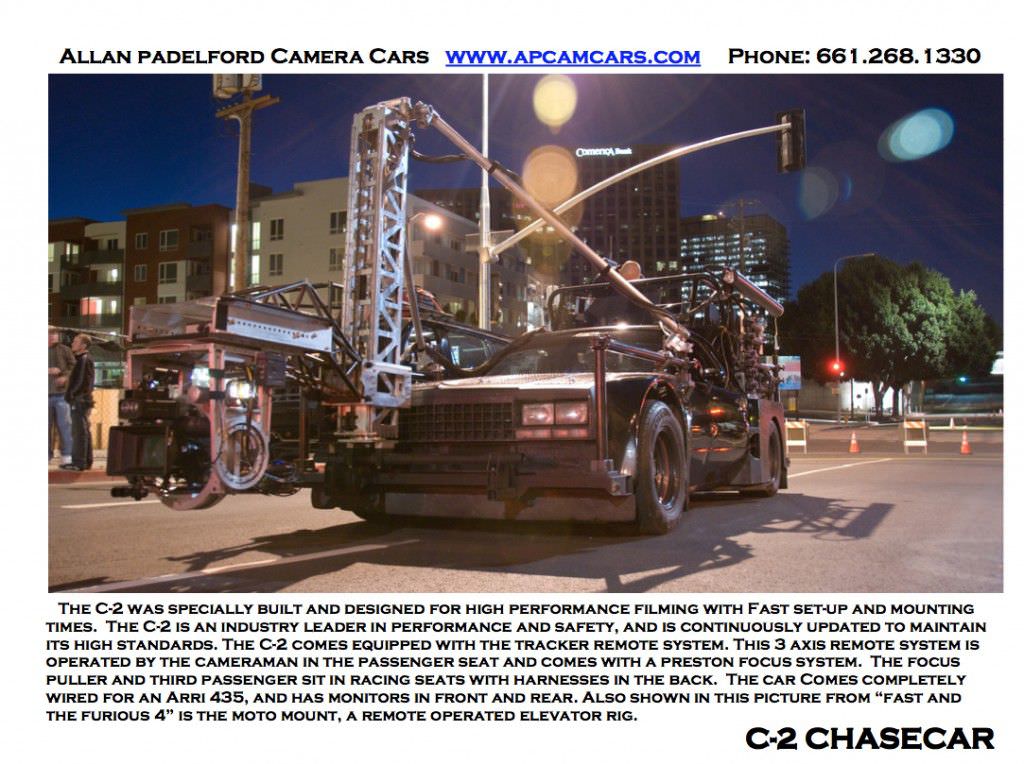 Designed by Padelford specifically for Fast 5, this lightweight, high performance car catches images just inches off the ground to provide the ultimate road rush. No wonder it’s his favorite to drive. “Spiro will yell, ‘OK, Padelford, it’s Subie time!’” he laughs. “That means we’re going to have a really close encounter.”

Surrounded by protective tubing that inevitably needs to be replaced by the end of every shoot, the Subaru allows Padelford to get “really, really close, sometimes even making contact with the bars protecting the camera. The car’s so light that it just bounces right off.”

Padelford’s Chase Car proved particularly useful in Fast 6 when said tank blows up a bridge and the pieces start to rain down on Vin Diesel in his Dodge Charger. “The bridge actually fell on the Subie,” remembers Padelford. “It’s all made out of foam, but it actually did some damage to the camera and broke our windshield.” Sure, it was a hassle, but that’s a small price to pay for the perfect shot.

Padelford has come a long way from the speed freak who mounted some cameras onto a supercharged El Camino to make his debut in 1988’s Days of Thunder and got by filming car commercials until the decidedly one-horsepower film Seabiscuit elevated him to the top of his craft. But as long as Fast & Furious films are being made—a pretty good bet considering the latest installment’s $97 million opening weekend—he’ll be there trading paint with the big boys, the unsung hero in one of Hollywood’s most enduring franchises.