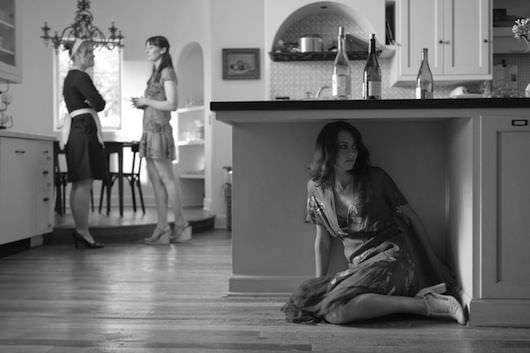 The Master of the Whedonverse takes on Shakespeare in 'Much Ado About Nothing,' which opened to rave reviews on June 7.

Shot in black-and-white in just 12 days, and featuring a group of friends (including Castle’s Nathan Fillion, Angel’s Amy Acker and The Avengers’ Clark Gregg), Joss Whedon’s wonderful, modern adaptation of Shakespeare’s classic comedy, Much Ado About Nothing, just might be the biggest surprise of the summer.

We talked to Kai Cole, Whedon’s whip-smart wife, about shooting the film at home, what being an architect taught her about making movies, and bucking the Hollywood system.

The Credits: I heard Joss talking about how you guys do Sunday Shakespeare readings at home with your friends. Out of all the Shakespeare plays, how did you settle on Much Ado?

Cole: When Joss went to do The Avengers, I started looking for a movie to produce myself to get my feet wet. I was in New York visiting him on the set, and we were talking about how when he got home, he wanted to get the gang together to do Shakespeare readings. And when I heard that, a lightbulb went off in my head. Amy (Ackers) and Alexis (Denisof) had done this in our yard. And I thought, this is a great opportunity to make a movie. We have a short amount of time, and we could just do it. We could just get it done before anybody knows what hit ‘em.

What did Joss think?

Joss was actually the first person to convince, because he’d been working on The Avengers for so long, and he was burnt out. Plus it’s a crazy idea (laughs).

How did being an architect lend itself to producing?

I’m not a producer normally, but I just thought, What’s the difference? Produce a house, produce a movie. It’s all the same—making a product. It’s about bringing great people together who are wonderful at their jobs. You have a budget, you have your artisans and you have your vision, and you do everything you can to make sure your vision becomes a reality.

You shot this in 12 days at the house you built, which is stunning, by the way.

Thanks. I designed the house, and we always thought it would be a great place to film something.

Were you able to bring a fresh take to moviemaking?

Yeah. Considering that from conception to finishing it was in about five or six weeks, I’d say that was a fresh approach. It was, “Let’s just get it done. Let’s not listen to anybody. Let’s not hear the naysayers and not doubt ourselves. Let’s do it and not go through the whole Hollywood process. We didn’t want to hear, “You can’t cast that person,” or “You can’t do it in black and white.” I can’t tell you how many times with construction I’ve heard, “Well that’s a nice idea, Kai, but this is how we usually do it.” I think the most powerful thing I brought to this was my lack of Hollywood-ness. I don’t know the system. I mean, I do know it of course, because I’ve been around it forever and ever, but I just don’t understand why people have to do things the way they always say they have to do them. It makes me crazy.

I appreciate your moxie.

I was like, “Why can’t we do it this way? I’m sure we can. There’s got to be a way.” That kind of questioning and searching and pushing is what I brought to the party.

How did the casting process happen?

We had a party when Joss back to L.A., and we just asked people, “What are you doing next week?” It was kind of beautiful in its simplicity. Joss already had these relationships with the actors that he’d cultivated over the years, and that’s one of the reasons I’ve been wanting to do our own stuff. It’s such a unique position that he has from his Buffy days. Dr. Horrible and Cabin in the Woods both come out of the same kind of thinking: My frustration of watching Hollywood work. I’ve watched Joss write multiple scripts and wait around for executives, [sometimes] for years. It’s like, Why does Hollywood have to be so inefficient? I really don’t understand, as you can tell from my tone. But the wonderful thing about the Internet and Do-It-Yourself and cameras being more affordable now is that you don’t have to wait around.

Was there ever any fear that you’d piss off Hollywood for bucking the system?

Not for me. That’s not my day job. (laughs). It doesn’t really matter to me. But I think there’s room for everything in the world. I don’t think the studios or huge film companies are really gonna be scared that a little black-and-white Shakespeare movie got made.

How did you and Joss work together on set?

It was very individual. My whole job was to make it so Joss could do his job. And we worked beautifully together. I was behind the scenes: If there was a yapping dog, or a policeman at the door or somebody sanding their floors, I would make that go away. I got to move almost ghostlike through this every day while continuing to live my own life. I saw the movie being made — this thing I’ve been dying to do for so long, then I also saw the house that I worked on for so many years being used in ways that I never expected. It was a beautiful, magical experience. Everybody should make movies in their house. It was heaven for a designer.

Were you living there during filming?

Oh, yeah. Our everyday life was going on. I’d take the kids to school in the morning and they’d have snacks when they got home. It was nice, I didn’t have to think about making their lunches for a while — I just grabbed stuff from craft services.

I know! It was beautiful. I loved it. I don’t even think the kids thought it was that big of a deal.

What did your neighbors think?

Our neighbors were wonderful, but most of them didn’t know what was going on. We did go around and tell people, “We’re doing this movie, hopefully it’s not going to bother you. Let us know. Don’t call the police!”

TAGSJoss Whedon Much Ado About Nothing The Avengers