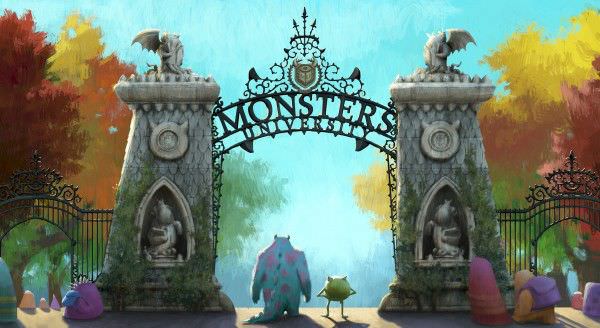 It’s one thing to be surfing the web and stumble upon an outrageously awesome movie trailer that you watch over and over again just because it really is that good. But have you ever found a website all of its own dedicated to a single film that was just as mind-blowing? Like a site that was created all about one movie, complete with interactive extras and a calendar of events to go along with?

These days most movies and TV shows have content-heavy, interactive websites available for the everyday viewer, but these sites give us a bit more. They aren’t just casual information databases for avid fans; they create an added world of adventure and serve as pieces of entertainment themselves.

Monsters University
Release date: 6/21/13
http://monstersuniversity.com/edu/index.html
It hasn’t even hit the big screen and there is already a way to see what the Greek community, housing and dining services and campus life are like at Monsters University. Current students, faculty and alumni can log-in to their M.U.Net accounts with proper usernames and passwords, but the institution won’t be accepting fall applications for admission until a later date. At least, in the mean time, you can buy an MU sweatshirt or travel mug.

WOW Factor: On April Fools’ Day, the MU site was hacked and defaced by their rival university, Fear Tech. Good one, Pixar.

Sound of My Voice
Release date: 8/12/12
www.soundofmyvoicemovie.com
If you missed this excellent film (the first collaboration between director Zal Batmanglij and his writing partner and star, Brit Marling) you can watch the first 12 minutes of it on its very own website. Learn the handshake that allowed journalist Peter and his wife to be accepted into a cult whose leader claims to be from the future. Just make sure your PC has an updated version of Adobe Flash Player and a large screen for viewing pleasure.

WOW Factor: Within the first 12 minutes that the site lets you watch, there are nine bullet-points that allow you to pause the video and learn more about the particular scene. For example, at the 2:19 mark when Peter is being handcuffed with a large zip-tie, the video allows you to stop and click on a link that jumps to another video that actually teaches you how to escape a zip-tie. Clever.

Alice in Wonderland
Release date: 3/5/10
http://adisney.go.com/disneypictures/aliceinwonderland/#
Branches unravel, a teacup spins and Alice falls into that deep, dark hole as soon as you arrive at the site for Tim Burton and Disney’s 3D film. Browse TV spots and featurettes, meet the cast and crew members or Mad Hatter yourself on Facebook and make your face look the magical character himself. And if none of that sounds appealing, just click around and enjoy the whimsical theme music that keeps you bouncing in your chair.

WOW Factor: On the left-hand navigation, there’s an option that allows viewers with capable desktops to put the site into 3D viewing.

Up in the Air
Release date: 12/23/09
http://www.theupintheairmovie.com/
‘Your site is on time’ and you may now begin boarding. Takeoff with this 2009 film and admire an aerial view before you’re greeted with a delightful soundtrack of tunes from of the original score. The Departures and Arrivals menus let you scroll through music, meet the cast and crew and watch uncut featurettes with George Clooney or Jason Reitman. The picturesque images are a treat, and the site is enormously clean and easy to read.

WOW Factor: As you click through from one page to the next, various overhead shots of clouds, landscape and night sky fade in donning inspirational quotes from the script of Up in the Air.

Avatar
Release date: 12/18/09
http://www.avatarmovie.com/
You thought the movie had special effects? Its tailor-made website is chock full of every video, information guide and interactive game you could ask for. Choose from taking a field tour of Pandora with Pandorapedia, download unused footage from original filming or create your own Avatar and put your face on the Na’vi body. It’s the kind of site that you can get lost in for hours on end, and makes you feel like you’re watching the James Cameron movie all over again.

WOW Factor: An interactive option called Pandorama allows website viewers with webcams to put their virtual selves into the world of Pandora and take a walk through.

This science fiction film that held aliens in refugee camps in South Africa that was created some four years ago was one of the most interactive film websites at the time. District 9 is a wrecked camp of debris and rubble, but that doesn’t mean it’s not awesome. Check the MNU Local Alert System to see where aliens are trolling, or, check-in to MNU Training Simulation Camp and learn how to safely board a spaceship, rappel a building and make a non-human arrest.

WOW Factor: Channel your inner Call of Duty skills and play the ‘MNU Alert Game’ found at the bottom of the page. You can be an alien or a human, but you have to complete your missions and kill the right species with the click of your keyboard.

Coraline
Release date: 2/6/09
http://coraline.com/
A button spins for a bit more than 60 seconds before you can enter the hand-made world of this 2009 Henry Selick film, but it’s well worth the wait. The site lets you explore the parallel reality where 11-year-old Coraline lives, complete with a piano you can play on your keyboard, a mouse circus you can watch and applaud at and even a video of a man with a dancing mustache. It’s no surprise it won a Webby Award.

WOW Factor: The site is one big navigation menu. You can drag your mouse to move the scenery and hover over one area of interest, or you can just bring up a map and explore in 13 different interactive sub-sites.