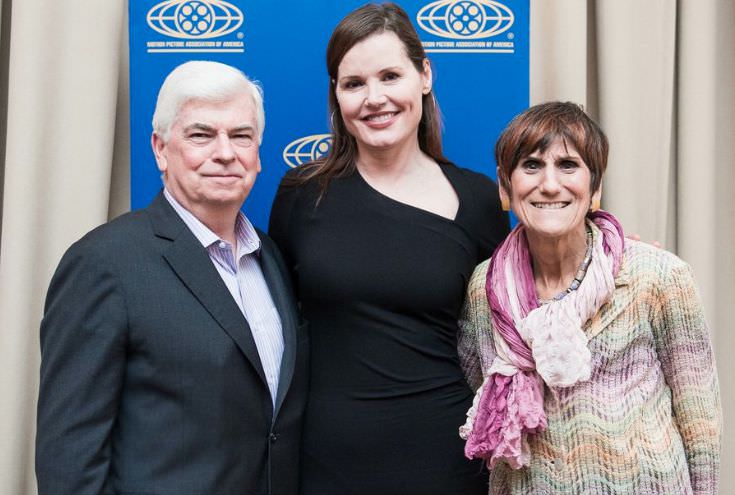 An Evening With Geena Davis

Geena Davis has worked in the movie business for more than 30 years, with a career that includes an Academy Award® for Best Supporting Actress for 1988’s The Accidental Tourist and another nomination for Best Actress in a Leading Role for 1991’s Thelma & Louise. Now, Davis is working full-time to help improve the industry she’s made a career in.

“What we see on screen is so important because it makes it normal,” Davis said last Wednesday at an event hosted by the MPAA in Washington, D.C.

Davis is hoping to reverse a trend in recent films. In the five years between 2006 to 2011, women depicted just 3.4 percent of chief executive officers, zero district attorneys, and 16.3 percent of science, technology, engineering, or mathematics (STEM) professionals in a sample of 129 top-performing G, PG, or PG-13 rated “family films” surveyed by the Annenberg School for Communication & Journalism at the University of Southern California.

Many studios have diversity departments specifically to ensure a fair representation of a variety of races in movies, with a process in place to scrutinize scripts for characters that could easily be cast as Asian or Hispanic, for example. Davis would put a similar system in place to ensure gender equality, so that more movies like 2010’s Salt, which put Angelina Jolie in a title role originally written to be male, can happen.

Although Davis still occasionally acts–over the past few years, she’s appeared mainly in TV projects—advocating the research done by the Geena Davis Institute on Gender in Media, a nonprofit she founded in 2004, is now her full time job. She is able to use her relationships with many studios and entertainment executives to talk to them about the survey numbers, such as one in four: in family films, there is only one female character for every three male characters, a ratio the Institute says is unchanged since 1946.

“When we go to the studios, invariably they’re horrified,” she said. “Sixty three percent of people said what they learned changed two or more of their projects, where they added more female characters, or changed the dialogue, or put more clothes on them.” The response Davis has received from studio executives is that they’re open, and ready, to make changes.

She also has the full support of Senator Chris Dodd, the MPAA’s Chairman and CEO. “I don’t think it’s maliciousness. I just don’t think people think about it,” he said, when asked after the event.

Davis (who is, among other things, a member of Mensa) explained during the Q&A event with Rep. Rosa DeLauro (D-Conn.) that she became “a data head” when she became a mom and started watching films that target kids. Troubled by the hypersexualization of characters in G-rated movies and their lack of female characters, she quickly realized that her anecdotal observations meant nothing without hard numbers to back them up.

She commissioned research that found, among other things, the number of women in crowd scenes in the average family movie is 17 percent.

Similarly, Davis is looking to increase the role of women behind the scenes. She wants to help make the number of female writers, directors, and producers rise by sharing her data. She rejects the idea of regulating diversity. “It really is a creative industry and it’s toxic to talk about numbers and quotas.”

Davis said she hopes the response to her research will prompt a measurable change within the next few years. But she also said she’s watched “over and over” as female-driven movies achieve box office success but fail to launch a trend, including her own Thelma & Louise in 1991, or A League of Their Own the following year, neither of which prompted a rash of similarly themed movies despite the buzz of expectation.

Senator Dodd is optimistic, pointing to recent female-led successes such as The Hunger Games, Bridesmaids, and Snow White and the Huntsman, which have prompted similar expectations for studios to greenlight projects targeting female moviegoers.

“Historically, it’s been sort of a male-dominated business,” he agreed, but “it’s getting better.”

As far as her acting is concerned, thanks to her many choice roles, she’s very choosy when it comes to parts, but that’s because she can afford it. “If you ever read at some point that I’ve signed on to play Sean Connery’s comatose wife — because that’s about the right Hollywood age — you’ll know I’m broke,” she joked.