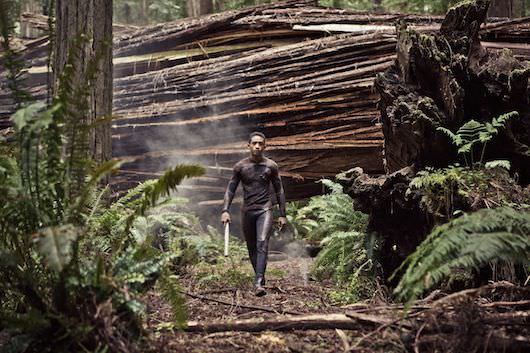 After Earth Screenwriter Gary Whitta on the Script’s Evolution

Sometimes the process of making a movie is as much of a surprising journey as any adventure tale that is being told.

After Earth, for example, started as a story of a man and his son trying to survive a crash in the wilderness.

The movie's original outline called for the pair in contemporary Alaska. Will Smith, star of the movie and credited with writing the story, saw a way to explore the family dynamic as well as larger themes of ecological stewardship.

To do this, Smith drafted Gary Whitta to work with him and After Earth director and screenwriter M. Night Shyamalan. Whitta wrote The Book of Eli, a post-nuclear war morality play, and two first-person-shooter games.

Instead of a car wreck, Smith's character, a military man and unpracticed father, and his audacious son (Smith's actual son, Jaden), are marooned following a space wreck. And while they still land on Earth in the revised story, it’s Earth 1,000 years in the future.

Humanity left the planet after mining it for its last resource, and Earth's collective response was to develop a sort of planetary immune system that eradicates humans who return.

As such, "After Earth" is a post-post-apocalyptic movie.

"Will had the idea to blow this out big, and on a much bigger canvas," says Whitta.

Whitta's task was to work with Smith and Shyamalan, introducing enough science to give the story a real-world foundation.

The team reached for spectacular ideas and visions, he says, "as long as it felt real or reasonable."

Still, Whitta said, "Our first priority is always telling an entertaining story. We're not writing just for the two science majors in the back of the theater who are rolling their eyes."

His game-writing background can be felt in a story line that bundles tactical challenges with incremental goals and missions that have to be addressed in order for the characters to be rescued. Ultimately, Jaden's character has to find the part of the ship that can transmit a 31st-century version of SOS. 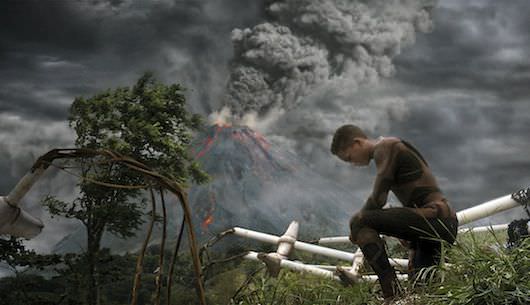 "We had fun coming up with challenges for Jaden, who's a kid in the middle of a jungle." But they went further, building on the fact that the pair is in the distant future.

"Earth's atmosphere has changed a little" in the movie, says Whitta. "We can no longer breathe it natively." Instead, the characters have to inhale from a limited number of small breathing vials once every 24 hours. "The vials have a liquid that coats your lungs" to make the air tolerable.  (Rationing health supplies is Game Writing 101.)

The weather has changed, too, in that it doesn't just cool off at sunset. Earth freezes.

"Plants and animals — the whole planet puts itself to bed each night in different ways to survive the frost."

And in a welcome counter to science-fiction boilerplate plot devices, the characters have grown up in gravity that is something less than Earth's, which makes physical exploits in the jungle that much more exciting. The latest trailer shows Jaden's character before arriving at Earth scuffling up a practice rock wall like a marmot, so this science item likely will play into that character's inner growth.

Almost as subtle, the writing team realized that human accents and vocal mannerisms will have evolved tremendously. Of course, Whitta says, it would be unrealistic to give the cast a new language, but the movie alludes to it.

"When you listen to Jaden and Will talking," he says, "listen to the accent." It's an attractive soup of British, South African and other influences on today's English tongue.