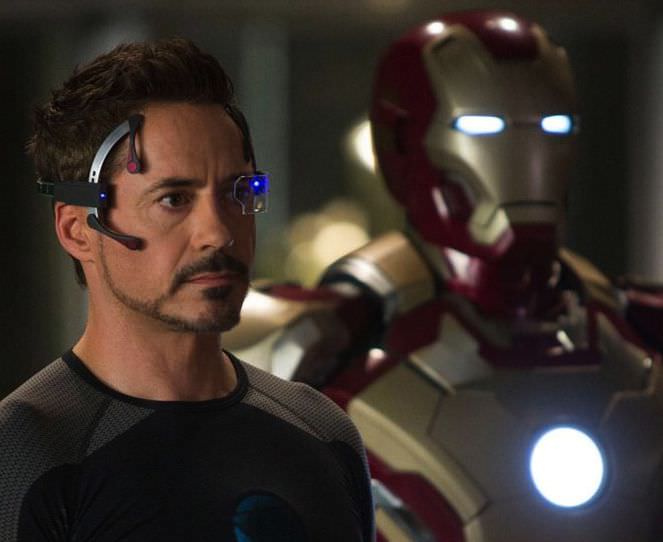 The Wild, Expensive (and not Always Improbable) Technology of Iron Man

You’d have to be a billionaire to equip yourself like Tony Stark, but it’s not entirely impossible.

Tony Stark is back. After helping his fellow Avengers save the world against a Norse god and vicious aliens, he spent years working on his technology, because at heart, Stark is an engineer. Marvel president Kevin Feige told GeekyTyrant.com that Stark has a whopping 42 new suits of armor in Iron Man 3, including “a prehensile suit that allows each individual piece of the suit to fly separately and latch on to him.” That suit is called the Mark 42, a significant upgrade from the last intelligent armor we saw him in in The Avengers, the comparatively tame Mark 7.

And what a weekend Tony had. His battle with the Mandarin (Ben Kingsley) was a bonafide smash–both on our shores and globally. People love seeing Robert Downey Jr. do his thing, but they also love all those incredible toys.

That got us thinking—Tony Stark is clearly the greatest engineer in the superhero universe, so it might be fun to break down his inventions and see how much all this would cost, and what, if any of his technology, might be possible in the real world.

A Financial Breakdown of Being Tony Stark

Thanks to the gang at Mashable, who posted this great infographic by MoneySupermarket.com, we have a decent sense of what it would cost Stark to create his suits and fill up his Hall of Armor.

A single Iron Man suit is like a super high-tech Swiss Army Knife—it has just about every tool you could possibly need to fight bad guys or impress Pepper Potts.  A brief summation, thanks to MoneySupermarket.com’s infographic, includes:

-Gold-titanium exoskeleton suit: This is the latest in Stark’s ever-evolving exoskeleton technology, which helps him repel bullets, missiles, and the rough effects of g-force on the human body. Cost: $15 million.

-Brain-controlled armor: Stark built the Mark 42 using nanotechnology, which allows his suit to assemble around him, piece by piece, via a remote synaptic link. Like Magneto calling all available metal to his hand, Stark can gather the various pieces of his armor to his body using his brain. Cost: Unknown.

-Repulsor jet packs: One of the coolest parts of Iron Man’s suit is, of course, his jet boots. He also has jets built into the palms of his hands, which he uses to stabilize himself, something he has to do an awful lot. $13.8 million.

And what about the Stark Mansion, which itself is wired with artificial intelligence (not to mention a garage with some of the greatest cars in the world)? Stark lives in Malibu in a palatial, cliff side mansion on Point Dume, that overlooks the Pacific Ocean (in real life, Point Dume is a protected State Preserve, so no one can build there). Movoto Real Estate crunched the numbers on their blog, and did their level best to assess what the actual cost would be. They estimated the Stark Manse is roughly 25,000 square feet and based on the designs of architect John Lautner. With the average price per square foot in the Malibu area being around $3,750, Movoto added an additional 25% because of his stunning view of the ocean (they say views can add up to 30% to a home’s price), which brings Stark’s house to a grand total of, wait for it, $117 million.

If you were to combine all of Stark’s toys–his Iron Man suits, his house, his cars (which include a Tesla Roadster, a Rolls-Royce Phantom, and an Audi R8 Spyder), MoneySupermarket.com estimates the total would be around $10 billion.

Applicability in the real world

Believe it or not, a lot of the amazing features audiences gape at during an Iron Man film are either already here or in the process of being built. Granted, they’re not as powerful and incredible as what you’ll see on the big screen, but some of this technology is reality.

SmartPlanet did a deep dive on the question of whether an Iron Man suit could exist last year, asking E. Paul Zehr, a professor of kinesiology (the study of human movement) and neuroscience, and the author of “Inventing Iron Man: The Possibility of a Human Machine.”

Professor Zehr lets reporter Christie Nicholson know that we already have exoskeletal suits, such as the HAL (hybrid assisted limb) robot and ReWalk robotic skeleton (which can allow paraplegics to walk at almost the same speed as people who have use of their legs). Zehr pointed out that the Iron Man-like technology we already have is more akin to the very first Iron Man suit he built while being held captive in Afghanistan in the first film.

What’s even more interesting is what’s already happening in the world of brain-controlled technology, like the Mark 42 suit in Iron Man 3. Zehr tells Nicholson that Stark’s brain-controlled Mark 42 suit does correspond to the experimental neural prosthetics of today, which can connect to the nervous system to control an artificial limb. “We have vastly improved our ability to record neural patterns from the brain,” he says, but the problem would be not only controlling an artificial limb, but an entire suit of armor. “We have over 100 billion neurons with roughly 100 trillion synaptic connections. You need to extract that information and then wire that through some interface to the suit of armor.”

Right now, the most state-of-the-art technology available has simultaneously recorded about a 500-cell sample of neurons in the brain using an electrode implant…again, out of 100 billion. “We’re still a long way from getting all the information we need to control something as sophisticated as the Iron Man suit,” Zehr says. In order to control an Iron Man suit you’d need electrodes implanted into your body, and they’d have to stay in.

Okay, so let’s move away for a second from building a brain-controlled suit of armor and just look at some individual pieces of the suit and see what’s out there.

The great entertainment and science website io9.com did a piece on building a real Iron Man suit, and they have some pretty great facts in there.

First off, that HUD helmet that Stark uses to control his suit (along with JARVIS’s help, of course) could be easily compared, io9 writer Annalee Newitz writes, “to helmet-mounted displays currently under development for fighter jets like the F-35.” Fighter pilots use heads-up displays to guide their jets like how Stark uses his HUD to guide his suit. The website Defense Industry Daily reported that a joint venture between Elbit Systems/Rockwell Collins and Vision Systems International announced $54 million in contracts to begin production of their Helmet-Mounted Display System (HMDS) which will equip all American and exported F-35 fighters.

Newitz points out there are several companies and labs that are developing Starkian exoskeletons that might not give the wearer superpowers, but would certainly make him or her stronger. UC Berkeley, for instance, has created several different types of exoskeletons in their Robotics & Human Engineering Laboratory. The above video showcases the Austin project, which is their series of low cost, accessible exoskeletons for people with mobility disorders. They also make a Human Universal Load Carrier (HULC) which incorporates their ExoHiker and ExoClimber which can take up to 200 lbs. without impeding the wearer. Raytheon’s XOS 2 Exoskelton “increases the human strength, agility, and endurance capabilities of the soldier inside it,” Army-Technology.com writes. The suit uses high-pressure hydraulics to allow the wearer to lift heavy objects at a ratio of 17:1 (actual weight to perceived weight).

Arguably the most radical of all of Tony Stark’s inventions is his nuclear heart. Where is this technology being used? Try on Mars. “Tony’s nuke heart can be compared to the energy source in the new Martian rover Curiosity,” Newitz writes, “a nuclear generator called a Multi-Mission Radioisotope Thermoelectric Generator,” will power the Curiosity’s cumbersome body and its built-in lab for years to come. The MMRTG has 10 pounds of plutonium dioxide, which is more than one would assume Stark has in his heart.

While there are no boots out there like Stark’s, there is Yves Rossy, who you can see in the video above is doing his best to fly like our favorite superhero.