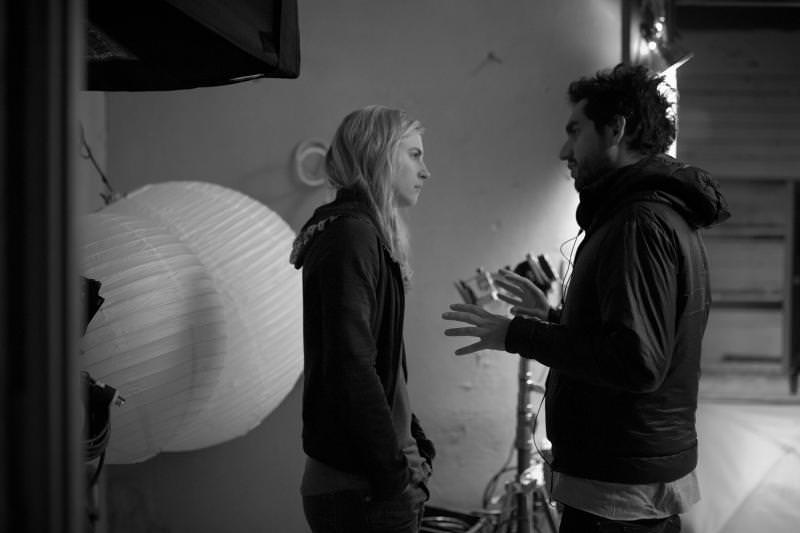 Rounding up the Cast and Director of Eco-Thriller The East

In The East, Zal Batmanglij and his filmmaking partner, Brit Marling, deliver an edge-of-your-seat eco-terrorism thriller in which an undercover overachiever (Marling) infiltrates a militant anarchist eco-vigilante group (including Alexander Skarsgard and Ellen Page) that arranges “jams” against corporate evildoers. Without giving too much away, you may find yourself asking, "What's really in this prescription drug I'm about to take?"

This is the second big screen collaboration for Marling and Batmanglij (pronounced “Baht-mahn-glitch”), who met as students at Georgetown University and moved to Los Angeles with a friend, Mike Cahill (writer-director of Another Earth — also starring and co-written by Marling) to make movies. Marling (star and co-writer) and Batmanglij (director) became the toast of Sundance 2011 with their first film, Sound of My Voice, which was about outsiders trying to infiltrate a cult (vaguely similar in theme to The East). Sound of My Voice also came with this immersive website that’s worth checking out (you can watch the first 12-minutes of the film there, too).

This time around, the duo teamed up with producer-brothers Ridley Scott and the late Tony Scott, and shot the film in Shreveport, Louisiana. Needless to say, in traditional Scott style, there were a bit more explosions and whiz-bang action than in Sound of My Voice.

One reason why? “First and foremost, we wanted to make an entertaining story, because none of this goes anywhere if people aren’t entertained,” says Batmanglij. We talked to Batmanglij, Marling, Patricia Clarkson, Skarsgard, and Page about freegans, eating out of dumpsters, and Spin the Bottle at a recent roundtable in New York City. 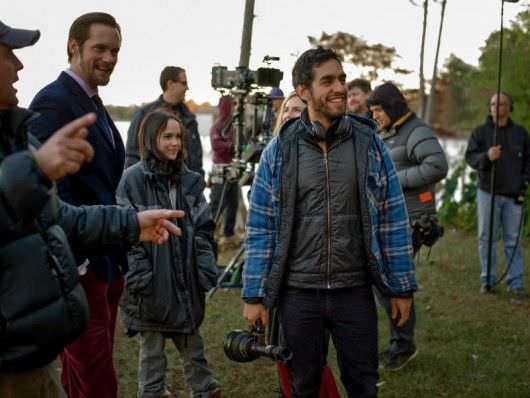 Brit, how did you make these characters so believable?

Marling: What I think is interesting about some of these anarchists or direct action movements is their activism is in the way they live their lives. Getting off the grid, not using the same energy sources, harvesting their food from what our culture sees as waste. It comes from the focus of their mission — they’re all there to wake people up. And part of that includes living in a way that keeps them awake.

You and Zal dove into the freegan lifestyle — living off the grid in real life for two months. Did any of that carry over to your lives today?

Marling: It would be awesome if the food that was provided today was just food that was harvested from the dumpster (laughs). But I think when you have an experience like that it changes you, and I don’t think we ever quite went back to the people we were before. But it’s a hard thing trying to figure out how to live an accountable life. I think we all think about it all the time and are frustrated by things. When you watch the BP oil spill happen, and they merely get slapped on the wrist with a fine that they could pay in like a week…

Clarkson: My dream is for the really big guys to go down, because somebody has to. You look at what just happened in Bangladesh, the clothes we’re wearing. We all have blood on our hands at every moment in our lives, and how do we stop that?

Patricia, would you ever dumpster dive?

Clarkson: No, I’m way too spoiled. I’m 53 years old. Probably the only thing I could do was go camping (laughs).

Marling: We did it for a summer. It was hard. You can’t romanticize it for sure, but there was so much meaning and feeling in it. Living in a tribe and sharing with everyone. I still think about it a lot. 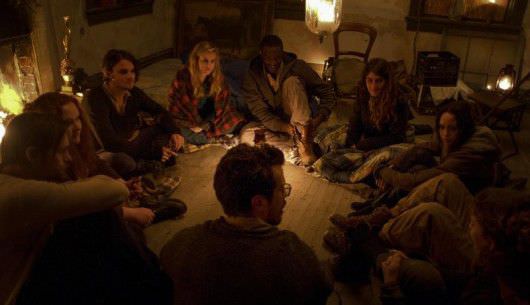 Which was scarier, getting into freeganism or coming back out?

Batmanglij: When we went into it, we stopped watching films, we didn’t listen to recorded music, we didn’t know what was going on in the news or the gossip world. We entered into a capitalistic-free zone. What replaced it was kissing each other while playing Spin the Bottle, taking food out of the trash, learning how to fix abandoned bicycles and then riding them around the city. We learned a lot, so when we came back, we were shocked by the world we’d taken for granted before. It was so overwhelming. There’s so much stimulus coming at you all the time.

Do you think this is an “issues” or “political” movie? 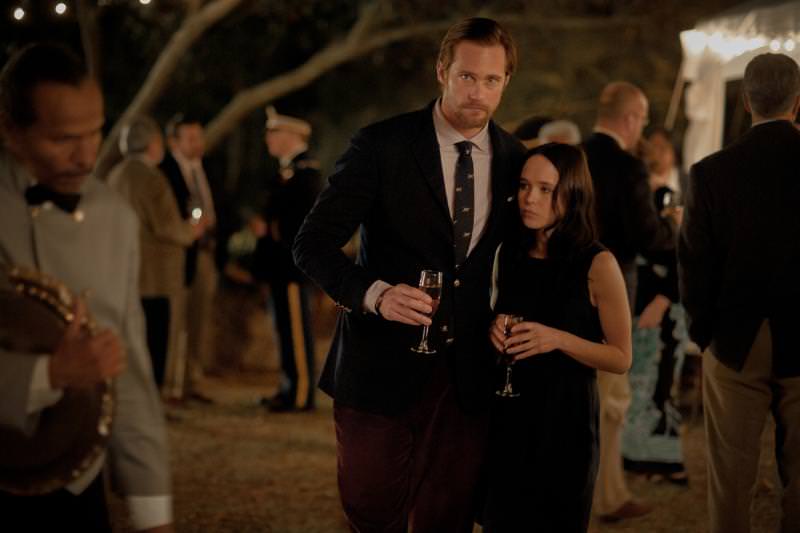 Ellen, where does your character Izzy comes from, and how does she justify what she does?

Page: These people really believe in living and creating no waste and taking accountability for their actions. She went through a huge shift, as do a lot of people who wind up in these atmospheres. Hers probably comes from profound guilt and anger.

Skarsgard: And Benji, my character, saw what all that wealth did to his relatives, how it affected and corrupted them in some way, and that scared him.

Had you seen Brit and Zal’s work before this?

Page: Yeah, we were both huge fans of Sound of My Voice, and what Zal had done with that. Brit’s performances in that and in Another Earth were just astounding. And then to know the story of how Brit, Zal and Mike entered the industry is just incredibly inspiring. I love their work, their passion and their purpose for telling stories. I wanted to be involved immediately.

Skarsgard: Absolutely. I was a fan, and I read the script towards the end of a season of True Blood, and it was just such an amazing script. It was so smart, and it made me think about very interesting questions. It was very murky who the good guy and who the bad guy was. Morally, where do you stand? How far are you willing to go for a cause? When I met Brit and Zal and saw their enthusiasm, it was just like, “Oh, please, let me work with you guys.”

Zal, what’s your writing process? Was there any improvising?

Batmanglij: We’d workshop scenes and try to make them feel more real. I always tell the actors, inspired by Woody Allen, “Just make it sound good.” We’re not precious about the dialogue. If you want to make it sound more real, then by all means.

Speaking of Woody Allen, your mom called you Woody Allen growing up, right?

Batmanglij: Yeah, she did. I’m really funny, which is funny because my movies are not funny at all. Our parents always encouraged us creatively, but never demanded any results. So my brother played music, but he was never asked to perform for anybody. I wanted to be a filmmaker, so my parents encouraged me to save my allowance. I made movies every day, but I never made a movie I finished until I was in college and I met Mike Cahill.

Tell us about how Ridley and Tony Scott became involved with this film early on.

Batmanglij: This was a $6.5 million budget, which is one third the budget of Silver Linings Playbook, and I don’t even know what fraction of a Ridley movie this would be, budget-wise. But of course, because I’m inspired by Ridley and Tony’s work, it has elements of Enemy of the State or Spy Game, two films I grew up loving. 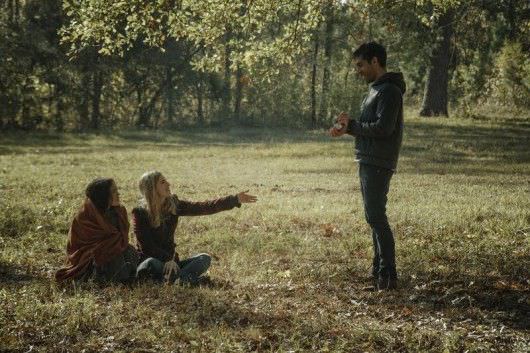 Considering that this film is about anarchy, how is your set run as a director?

Batmanglij: Anarchist collectives are all about having no leadership, and every vote is equal. And a film set is all about hierarchy. But I always like to think about it like the circus. In the circus, there’s this real sense of tribalism. The ringleader is not more important than the clown. I think the crew and actors felt that on The East. The costumers were no less important than me. We felt like everyone was working together to make a common film.

How much did the Occupy movement influence the film?

Batmanglij: It influenced our desire to make it faster and faster. Occupy happened three weeks into our pre-production. And it was so exciting because we were seeing images in the mainstream that we’d experienced on the road. Our parents had heard our stories but they’d never seen what it looked like, really. We were like, “We have to shoot this movie, edit it fast and get it out there!”