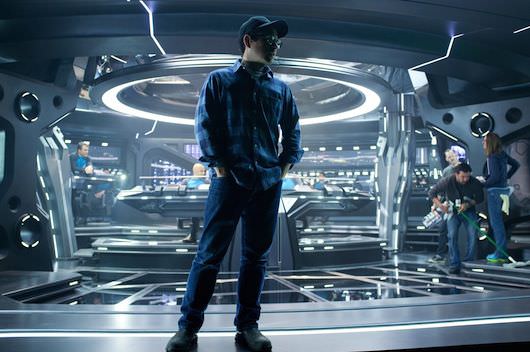 Homegrown: How Star Trek Left the Galaxy Without Ever Leaving California

As Star Trek: Into Darkness basks in the space-age glory of an $84.1 million opening week, the blockbuster can take pride in an even more impressive accomplishment: from ever-growing Paramount Studios in Hollywood to Lawrence Livermore National Laboratory east of Oakland, every frame of the J.J. Abrams blockbuster was shot in the state of California.

In an era when billionaire bachelor Tony Stark’s fall and rise was filmed primarily in North Carolina and James Franco’s awe-inspiring Oz was actually located in Pontiac, Mich., this is a rarity. And while those states, along with Louisiana, Georgia and New York, have deservedly staked their claims by offering generous tax incentives—some of which even cover a portion of the stars’ salaries—Star Trek proves that, when it comes to movie magic, there’s still no topping the Golden State.

Amy Lemisch, the executive director of the California Film Commission, estimates that only one or two large-scale productions film entirely in California each year, but she spotlights Star Trek: Into Darkness as a great example of how big-ticket blockbusters can tap into a system the state has refined over the decades. “Our infrastructure really is set up to support those sorts of productions,” she explains. “We have all of the large studio facilities, every piece of equipment and, most importantly, the very skilled crews that large movies need.”

Indeed, Lemisch finds that many productions lured out of California by too-good-to-be-true incentives quickly realize all that they’ve left behind. “Oftentimes a production goes out of state but gets there to discover that they don’t have that perfect piece of equipment or the amount of crew they thought they could hire locally,” Lemisch explains. “There are so many specialty items that it really becomes very costly.” And as they fly in additional crew or even ship basic set dressing across the country, studios are fast to learn the cost savings found by staying in California.

As an example, Lemisch cites an unnamed film with a budget under $20 million that moved its production from Canada back to California when they qualified for the state’s tax credit program. “The producer told me that they were able to shave days off their schedule because of the expertise of our crews,” Lemisch explains. “There are efficiencies and savings in working here that can work out to a production’s benefit.”

Wasted time is the biggest enemy of any production, and Mother Nature doesn’t always cooperate. “You cannot underestimate the importance of good weather for filming,” emphasizes Lemisch. “If you’re scheduled to shoot outside and can’t, it is quite a hardship.” In fact, another highly anticipated summer release, The Lone Ranger, brought its production to Utah and New Mexico in search of sweeping western vistas—but pulled months of work back to the Golden State when they ran into the southwest’s oft overlooked monsoon season.

Of course, if it’s vistas a production wants, California has them all. “We can do Tuscany, we can do Hawaii, we can even double for other planets,” laughs Lemisch. That’s why so many recent productions have used the state to sub in for Iraqi villages or Afghani hillsides and why downtown Los Angeles is still a worthy double for New York City.

These hidden costs aren’t the only way for California to retain Hollywood dollars, however, as the state is equally competitive in offering generous incentives to keep productions local. Though Star Trek didn’t qualify due to a budget that (easily) surpassed $75 million, the state can offer a very generous 20-25% tax credit on qualified spending.

On June 3, the California Film Commission will kick off its fiscal year by accepting applications from productions looking for a piece of this $100 million pie—a frenzied day that sees hundreds submit the paperwork to be entered into the state’s lottery system. Movies whose numbers don’t get called initially end up on a waiting list of worthy projects, bumping in in the queue when some of the funded projects inevitably fall out. (Lemisch estimates that about 70 of the 344 films that applied last year ended up receiving credits.)

The state of California may not need the help, but Lemisch sees the soaring success of Star Trek: Into Darkness as the beginning of a domino effect that might encourage other large-scale productions—ones that don’t even qualify for any credits—to stay in state. “I certainly think those filmmakers will share the great experience they had working here,” she explains. “It’s going to take those producers talking to their peers about the cost savings you find in staying here, that you don’t encounter unplanned costs when you go to a region that can’t handle a production of that size.” If they get the message, perhaps more films in the future will find a way to live long and prosper.