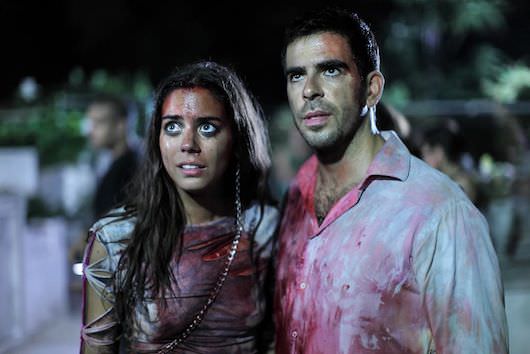 Brilliant, demented horror master Eli Roth — the Frank Sinatra of The Splat Pack — is ready to make the next round of moviegoers barf, thanks to Aftershock, a shock fest that chronicles the hell-on-earth circumstances that befall coastal Valparaiso, Chile, after an earthquake levels the town. While the film is helmed by Chilean director Nicolás López, Roth produces and stars, playing a hapless American who goes from partying and chasing girls to worrying about collapsing nightclubs and escaped prisoners. Aftershock opens today. Be forewarned, it is not for the feint of heart, but no film Roth is a part of ever is.

This is the man, after all, who has directed Cabin Fever, Hostel, and the currently running original Netflix series Hemlock Grove. He is also a refreshingly vocal filmmaker who is committed to finding new ways to get his film seen while asking that his fans respect the craft of all filmmakers. Roth famously raged against piracy in 2007 when Hostel 2 became one of the most pirated movies, pre-release, in history. “I'm furious,” he told MTV at the time. “If you don't speak out against it now, then when? You spend all this time making this product, and then people take it and steal it for free and pay nothing. Unless you start an awareness about it, that it's not OK, then it's never going to change.”

We talked to the mad, fast-talking genius at a roundtable discussion in New York City on April 7 about why he loves horror, filming in Chile and the Peruvian Amazon, and being inspired by Woody Allen. 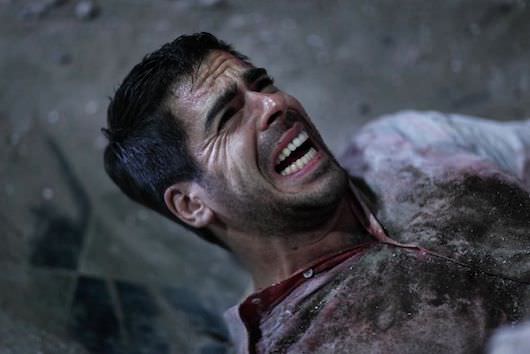 The Credits: What attracts you to the horror genre most?

Roth: I love horror movies because you can break all the rules. As a kid I loved fairy tales and ghost stories, they're the most fun ones to tell. There are no rules. You can do anything to anyone at any moment. And we take full advantage of that. You don't have to please everybody. And horror movies are the ones that matter, ultimately. If you think about what movie won Best Picture 30, 35 years ago, no one knows. Was it Chariots of Fire? Maybe. But then you see Evil Dead being remade and these movies that hit a chord with pop culture. Sometimes it takes years, but they're never forgotten. If it's a great horror movie, people watch them forever.

Is there one horror movie that transformed you?

Yeah, the movie that was the most shocking to me was The Exorcist, which I saw when I was six. I thought it was real. I thought I was going to get possessed by the devil, and my mom was like, 'Don't worry, we're Jewish, we don't believe in the devil.' But I was like, 'I'll be the Jew that the devil makes an example out of.' That movie freaked me the f**k out, and I threw up after I saw it. I was so traumatized. I used to have a problem barfing whenever I saw a scary movie. And it's probably why I make them now–to pay that forward.

Roger Ebert once stated, “A horror film doesn't need a big star, because…”

The scare is the star. Exactly. I definitely agree. You got The Shining with a big star. But more often that not you don't, Paranormal Activity is the latest example. Or Evil Dead. You don't get big stars. You get good actors or good victims. And if you deliver on the scare, nobody gives a f**k.

What are the basic elements that turn a horror film into a classic?

There's no way to know. It's up to the public. You try to make a classic, but you want to make a movie that doesn't play it safe. That takes chances, that breaks convention, and that does it in a smart way. You can't be afraid to make a movie that's going to upset people, and that not everybody might love. I still see people fighting about Hostel years later, but Hostel and Hostel 2 run nonstop on IFC. It's great that I made a movie that shocked people at the time and people can still argue about years later, whether or not it sucked. 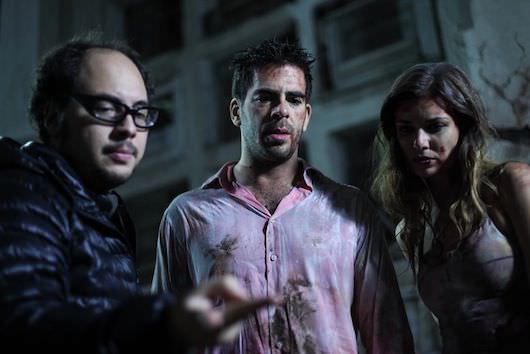 What rules do you want to break?

It depends on what story you're telling. You don't just make a movie to break rules. But as you're telling the story, you want to stay one step ahead of the audience. In Aftershock, we really build up the characters and the minor problems they're going through. And that was the fun. When we bring [character] Russell Dazzle in, the audience is like, 'Wait, we were in the earthquake movie, why are we watching a dance-off, what the f**k?' You feel them fighting, and then the earthquake happens, and it's like nothing matters but surviving. And that's the point. All of the stuff that happens in the movie really happened to people that Nicólas [López] knew, and we just strung it all together in one fictional [timeline]. The way you can break the rules is you can tell the most interesting story, that might not make some people feel good. People have an idea what a movie is, and what that movie's going to be, and a lot of times their first reaction is fighting, wishing you had done this. They're not watching the movie, they're fighting the movie. It's fun to take people to upsetting and dangerous places. That's what makes movies intense and fun. The worst crime in cinema is boredom. Honestly, I will take a bad movie over a boring movie and a safe movie. Hitchcock talked about The Birds being about the randomness of life, and life is this series of unforeseeable tragedies that we have absolutely no control over. And then we die. You just have to be happy in between those moments and be happy you have your health, because that's going to go someday, too. 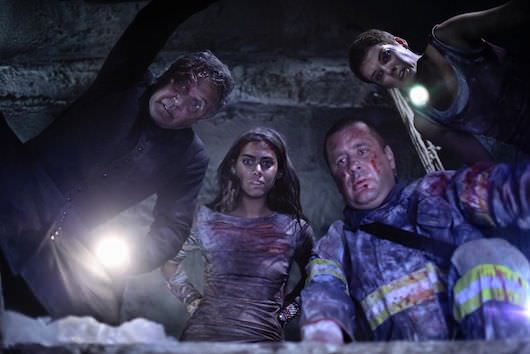 Are you concerned about the reaction of Chilean people to this movie?

The reaction to this movie simply couldn't be worse than it was to 3:34: Earth in Chile, the Chilean art film made one year after the tragedy. The movie was so bad, people were mad. We said, 'We're not going to do that.' We fictionalized it, and we wanted to tell an exciting action story loosely based on real events. And Chileans love it. The first part of Chile looks really fun–the vineyards, the clubs, the restaurants, the girls. So far the response has been incredible. When we were filming the scenes in the club, all those actors had lived through that, and it was oddly therapeutic for them to film it. Lorezna Izzo [who plays Kylie] was in a club at 3:30 in the morning and next thing you know, she and her friends were running through plate glass windows to escape because it was all going to collapse. And there were shards of glass in all of them, in their hair. You're in a club, and it's the last weekend of summer, so you're in a mini skirt and heels and you're dancing and you're drunk and you're literally running for your life minutes later. She said the music didn't stop, and it was surreal. And Latin people love horror movies. They know what to expect from me and Nicólas.

Did your experience on this one make you want to stay in Chile for The Green Inferno?

Absolutely. I had the time of my life on Aftershock. What we want to do is start our system of making our movies our way with total control, making genre movies that are independent but mainstream for the world. The Green Inferno is no bullshit. We went up in the Amazon in Peru. It was really scary at times. I don't think I could've made that movie had I not made others. There were tarantulas, bugs like from The Mist. It was terrifying. 110 degrees. We all had to get de-parasited. Everybody got yellow fever shots. There were so many points we almost got killed on that shoot, but it was great. It all worked out. We made this in a new way, we said 'let's release it on 100 screens for core fans who want to go out' — and obviously I highly recommend seeing it in theater — but also, if you want to order it with a bunch of your friends, it's eight bucks on iTunes, done. Don't worry about it. On to the next one. That's our whole thing. We saw that Woody Allen documentary where he's making two movies a year, and we're like, 'Okay. something's wrong with us. We're lazy. We're like, Shoot, shoot, shoot. Don't over think it. Write a script, go.' That's the speed we're moving at now.’