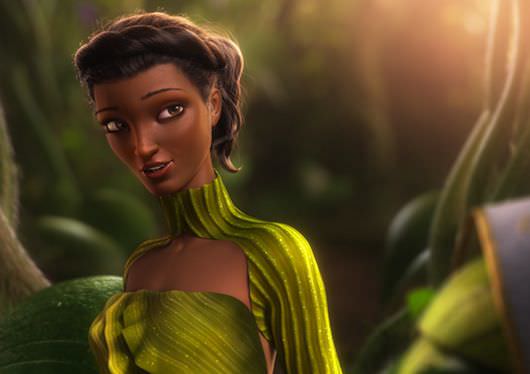 How do you oversee the work of more than 500 people over the course of several years on a giant 3D animated film without losing your mind? Producer Jerry Davis of Blue Sky Studios, who helped shepherd the production of Twentieth Century Fox's Epic along with his producing partner Lori Forte, gives us the scoop.

Epic, which features characters inspired by William Joyce’s children’s book “The Leaf Men and the Brave Good Bugs," tells the story of a teenage girl named Mary Katherine (known as M.K., and voiced by Amanda Seyfried) who finds herself, Alice-like, transported into a secret universe that exists in miniature right beneath our noses. M.K. is recruited into a forest battle where the forces of good and evil have been waging a war over the natural world–a war her father alone had always known was going on. Directed by Chris Wedge, the cast includes Colin Farrell as the valiant Ronin, Christoph Waltz as his nemesis Mandrake, Beyoncé as Queen Tara, and Jason Sudeikis as Professor Bomba, M.K.'s scientist dad.

Davis, who worked on 20th Century Fox's first Ice Age and Robots, tells us why this journey of taking a beloved book and turning it into a 3D adventure was so special. Spoiler alert; it had a lot to do with working with 500 of his closest friends. 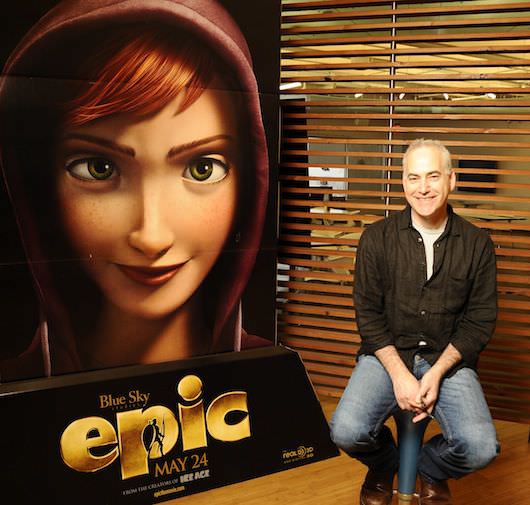 The Credits: It's been eleven years since your first film with Fox, Ice Age. How different is the production process now?

In terms of the technology, Epic is light-years beyond Ice Age. On Ice Age, we were building the tracks to make this movie even as the train was running down them. We produced it with all kinds of constraints with moving cameras, character density, characters per scene, and so on. With Epic, we pulled off some incredible feats of complexity and technology. We have entire forests where leaves are blowing in the wind and light is reflecting through them. We have thousands of characters that are moving in battle scenes. We pulled this off with a judicious allocation of resources, so that we weren’t pouring time and energy into elements of the frame that the audience really doesn’t need to be looking at. 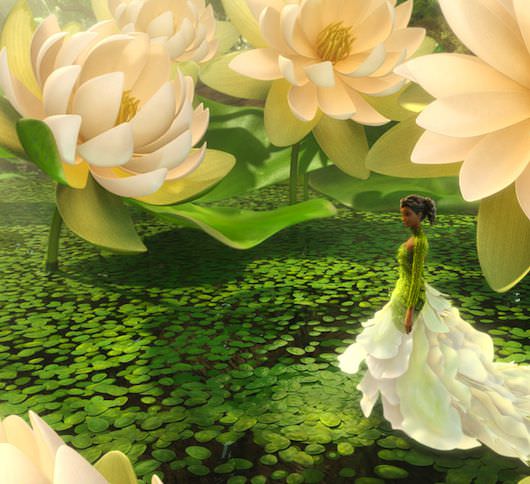 Can you tell us a bit about the creation of the miniature forest world that M.K. is transported to?

The technology gives you better tools. Those are elements that move and the way that light reacts to objects. You can get much closer to a photo real experience. But at the end of the day, it really has a lot to do with the design sensibilities, and [director] Chris Wedge was going after the experience of going into a small world that exists within our own. This is a world filled with objects that are familiar to you, but because you’re seeing them from a different perspective, it looks like an alien world. So the dandelion that you see walking past a patch of grass looks the way you normally see it, but if you were two inches tall, the dandelion looks like a palm tree. And we took that sensibility as far as we could in making the environment feel vivid and familiar, yet somehow a completely different experience. 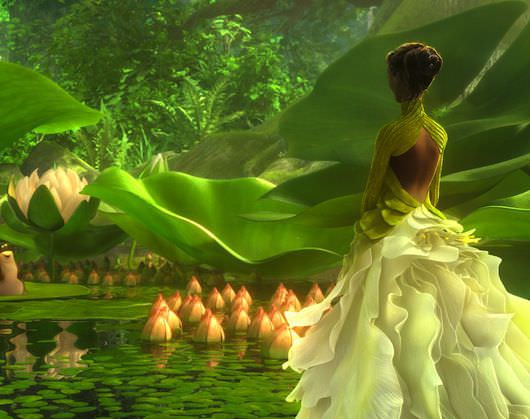 How long did it take from that first script to the finished product?

The simple answer is that once you have a script, it takes about a year to get it completely on its feet in our world, where you can watch the whole movie in story reel form.

And the story reel form is not the actual animation, but the entire film storyboarded?

Our storyboard artists are trained in animation storyboard technique, which is a bit more involved than a live action storyboard. You’re expressing much more of the emotion, the acting, the camera, and the blocking. And we’ll work on a scene in storyboards and then we’ll put it in the Avid, string it together with dialogue and effects and temp music and watch the scene.

It's like a moving blueprint, and we evaluate it and make changes for a full year until we began animation. And then there was about a full year of animation. So, that’s about two years. During those two years, you’re not just storyboarding, you’re also designing, building the characters in a virtual space, which is an incredibly challenging process of translating a 2D drawing to a 3D object, having animators working on those objects to make sure they can connect the way you want and look appealing in a 3D space. 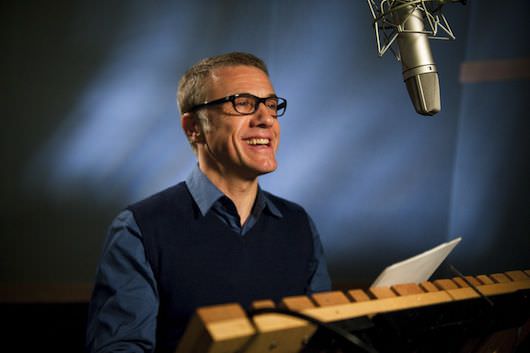 You’ve got a great array of actors with accents in this film. Colin Farrell (Irish), Christoph Waltz (Austrian), do they retain their natural speaking voices?

We have a great cast of voice actors, and I give Christian Kaplan, who’s the senior vice president of casting at Fox, enormous credit for being an inventive casting director. He really has a knack for finding interesting voices for us, and has done it on all of our films. We actually really try to allow people to use their natural accents as much as possible because you’re not asking people of this caliber to do something different with their voices, it’s them that you want. You want them to inhabit your character with as natural a cadence as possible. So Colin has a bit of an Irish thing going on, and Christoph sounds familiar with his Austrian accent. 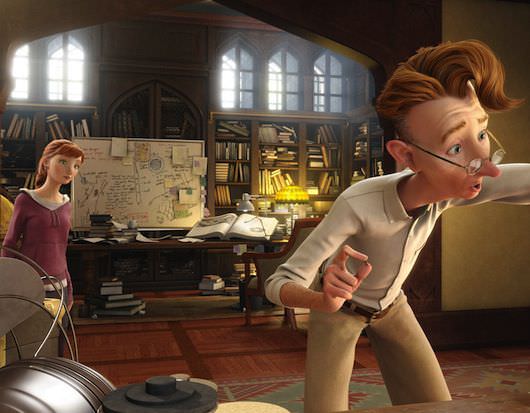 Yes, it may be a trend now, but it wasn’t a trend when we started [Laughs]. M.K.'s an interesting character because she’s 17, she’s lost her mom, and her dad’s this nutball. And she’s strongly believes that she’s capable of making it on her own. She doesn’t want to do the work to try and establish a connection with her father who’s clearly out of his mind. So she’s really come there to establish her independence, but the movie, thematically, is about how we’re all connected. So her story, as she drops into this world by accident, the world that her father has been obsessed with, she finds not only was he correct, but that this world’s in danger and she can play a role in saving it. And in doing so, she begins to appreciate the father that he is, and she realizes that having that connection to him is so important. Eventually she has to find a way back.

Producers rarely get asked what you actually do during the production of a film. There's a good percentage of the movie loving public who believes movie producers primarily sign checks, complain about the checks they have to sign, and play golf.

[Laughs]. Sure, and that’s a great question. Producing varies so much, from picture to picture and from medium to medium. Animation is very, very much a different producing task, and a very involved one. The job Lori Forte and I have in this process is to keep everybody on the same track and to keep Chris’s time focused and productive. To make sure that when these teams are working they have the vision in mind that we keep working with our partners at Fox and make sure that we’re all growing in the same direction.

It’s a great challenge. It's also great to work with somebody like Chris Wedge, who’s such a visionary in what he does. I’ve had a great partnership with Lori, who has produced all the Ice Age movies and is enormously talented in shepherding these movies. We’ve had a great relationship with Vanessa Morrison whose provided the leadership at Fox Animation, and she’s been a champion for the movie that goes beyond our wildest expectations. I could go on about the challenges of it, but honestly, when you have a crew this big, 500 people working on it over a period of years, you really appreciate that it is a collaboration and so many people touch it, and contribute to it, and make their living from it that it actually becomes quite a responsibility to make sure these movies are as great as they can be.

Speaking of the fact that you have hundreds of people making their living off this movie, and each bearing responsibility for an important component of making this film what it is, how do we protect their efforts?

It’s frightening that downloads have become such an easy, commonplace thing to do, and I truly worry for all of these people who make their living this way. You can certainly find some comfort in the fact that most people who look at those downloads are seeing a vastly inferior experience to watching the movie in a theater. That is not going to stop people, I think the best way to slow down if not stop piracy is to do as much education as possible about the real people behind these movies. And to make it clear that these are people’s jobs and that they’re not the wealthy stars, these are people who have regular jobs and support families and scrimp and save and do the same things that we all do to make a living. And they’re affecting by piracy, and hopefully knowing that, people will think twice before they download something.