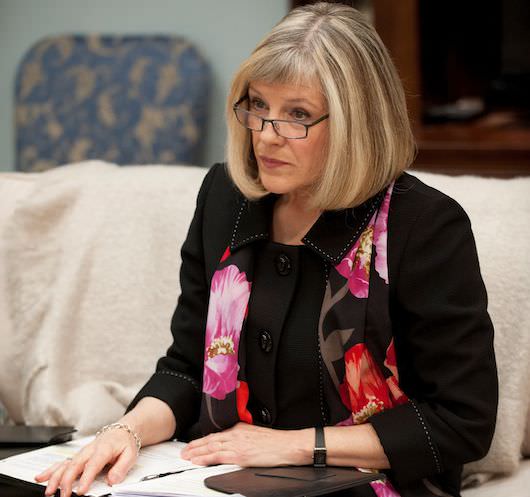 Mimi Kennedy pops up on the screen in the most unexpected places, but as an actor, writer and political activist that should be no surprise. She recently played the formidable madam in a house of ill repute in ABC's Scandal, Jason Segel’s tough talking mother on the big screen in The Five-Year Engagement and the soigneé mother-in-law-to-be in Woody Allen’s all-star cast of Midnight in Paris.  Known early on for her TV role as Dharma’s hippie mother in Dharma & Greg, last year Kennedy appeared on Anger Management, Up All Night and In Plain Sight.  And now, she has recently wrapped shooting in Baltimore with director Armando Ianucci and Julia Louis-Dreyfus for HBO’s second season of Veep. Set to air this Sunday, April 14, this hilarious political satire is based on Ianucci’s BBC series The Thick of It, which was a take on the Tony Blair style of modern British government. It later hatched the American film In The Loop. Veep stars Louis-Dreyfus as Selina Meyer, a one-time presidential hopeful now mired in her role as Vice President.

Kennedy joins a cast of comedy juggernauts, including Anna Chlumsky, Tony Hale and Timothy Simons. The Credits caught up with Kennedy at her LA home to talk about her new role on HBO's most reliable comedy.

The Credits: What is your role on Veep?

What was the most exciting part about being cast in Veep?

At first I was just so thrilled that Armando had written me into the script.  But when I was on the plane to DC on my way to the shooting, I see this tall drink of water and it’s Zach Woods.  He told me Ianucci was reuniting the American cast members who had been in In The Loop.  David Rasche and Chris Addison, also in Baltimore directing an episode that would be in rehearsal while we were there, would be in the episode too, and we’d see writers Simon Blackwell, Jesse Armstrong and Tony Roche again, who wrote and worked on In The Loop. Unfortunately James Gandolfini was the only one of the American cast members that wouldn’t be back since he was shooting elsewhere. I felt as if Armando had planned a surprise birthday party for us.

What was the atmosphere on the set?

Armando gathers the cast and we read the script at the table. Then we get scenes on our feet. He lets us loosely just riff on what we think is going on between our characters. So when he introduces a new character he can see the flavor of the relationship developing, which gives the writers more ideas about how to point a scene or what else to introduce. That’s what we did for two days. Then they write a new script, generally the same arc as the original script, though adding some of what they might have picked up in rehearsal. We shoot all of that. After that, they come up with new pages and say, “The scene is this now.” You will see very different details and different jokes and that’s the fun of it. They’ll say, “What if you guys do this?” It’s shot in a warehouse in Baltimore with hand-held cameras and the actors are given a lot of freedom to move around and improvise.

She’s fantastic to work with—deadpan funny, my favorite style. Julia and I were in a scene together and the set up was we had to negotiate some budget compromises before midnight.  We had to do it at her daughter’s birthday party.  So she’s torn as a mother between having to do it at her daughter’s noisy 20-somethings party with a DJ playing and her ex there, and I’m yelling over the music, “We have to do this now.” We go into the ladies room to talk it out and there’s a fight in there. So we go into her office and I have this huge allergy attack from some flowers. I lost my voice for two days from all the sneezing, choking and coughing I faked. At one point I laughed so hard at something Julia was doing that I broke up and she said, “Close your eyes!” I’m sure she gets that all the time, because she’s so hilarious. In fact the whole cast is brilliant to work with.

Frank Rich, one of my favorite culture/political writers [former theatre critic for the New York Times (then an Op Ed columnist), contributor to New York Magazine] is one of the executive producers so talking to him was a “rich” experience for me! He and I knew each other tangentially. He informs the writers about American policy issues, although they have all kinds of consultants.  At one point Julia was saying, “Let’s leave.  Turn right, turn right.” And I said, “I always turn right. You follow me right.”  And they said, “We can’t use that. We can’t refer to the left or right or liberal or conservative.” They try to stay to the center so it’s not predictable. They walk that line.  The whole thing moves very fast, even when they’re improvising. And they pack a lot in. Armando said the first cut of In The Loop was four and a half hours that they had to get down to 92 minutes.