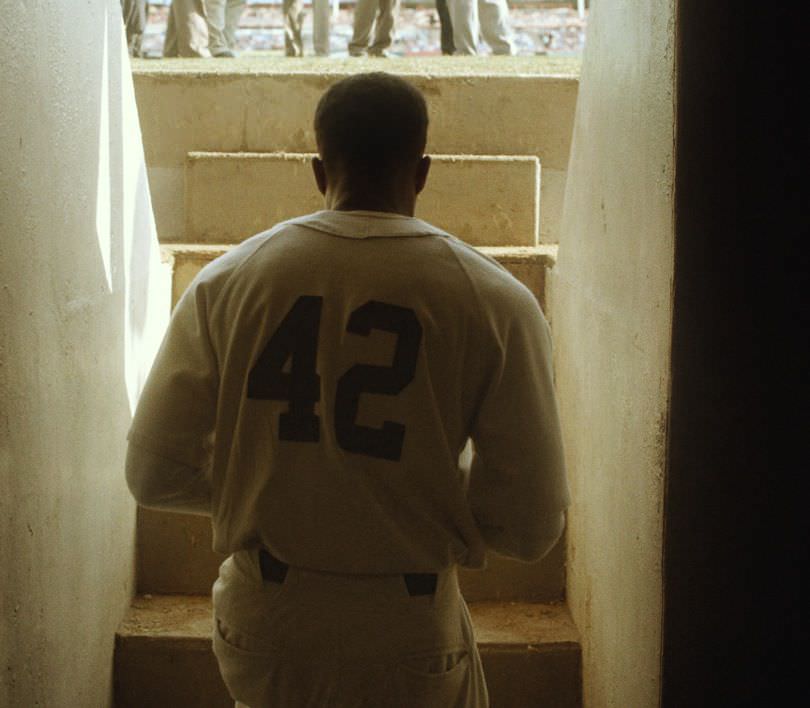 Let’s take a quick glance at some of the giants composer Mark Isham has worked with; Robert Redford, Brian De Palma, Jodi Foster, Robert Altman, and Sydney Lumet. In the music realm, his list includes; Bruce Springsteen, Willie Neslon, Joni Mitchell, The Rolling Stones, and Van Morrison. Yet there is one legend Isham has worked for (in a very different sense) that loomed even larger when he joined director Brian Helgeland’s team to take on Warner Bros.’ 42; Jackie Robinson. The biopic tells the life story of Robinson (Chadwick Boseman) and his historic signing with the Brooklyn Dodgers, breaking the color barrier in Major League Baseball, under the guidance of team executive Branch Rickey (Harrison Ford).

“There was a sense of real responsibility to do a good job on this,” Isham says, remarking that everyone involved in the film was committed to honoring the late, great Robinson. With his widow, Rachel (played in the film by Nicole Beharie), still herself a powerhouse into her 90s, there was added pressure to get it right and honor her as well. (This, of course, is to say nothing of actor Chadwick Boseman's responsibility playing the man himself.)

We spoke to Isham about finding the right sound to convey the groundbreaking life of Jackie Robinson, what parallels exist between working with Robert Redford and Van Morrison, and what Robert Altman taught him about filmmaking. 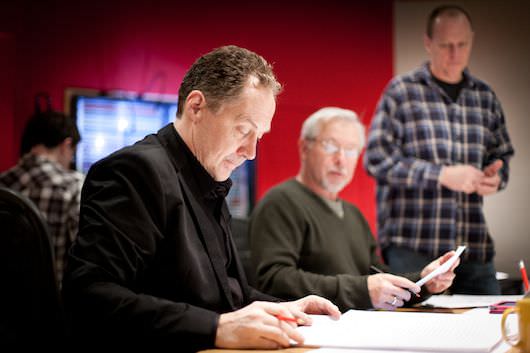 How do you craft a score for 42 about a larger than life icon that’s nuanced and subtle rather than overly epic?

Isham: It came out of discussions with Brian and the picture editor [Peter McNulty] and their music editor [Thomas Milano]. A few things came out of those discussions. One was that yes, we do want a traditional Hollywood score, orchestral, and we’re not going to try to be clever and modernize it, it’s going to be in the grand tradition of Hollywood scoring. Epic. Because it is an epic story. The other thing is that for the tough parts, there’s obviously points where he’s being abused in public, or abused psychologically, and we’re not going to score those, for the most part. That would probably start to lead us down to that slightly mellow dramatic, over the top path. Those parts stay much stronger and much more effective in the story telling if they’re left just to resonate on their own, as if you were a fly on the wall.

Did you ever just let it fly and go for it?

The last seven minutes we just go for it. There was some trepidation on my part, but I have to admit, as it unfolded, and I did my first demo pass, I realized that I’ve built this thing up about as big as I know how, and the picture takes its, this character takes it, and it really balances out very, very well.

Is there a musical through line to 42?

Absolutely. I wrote most of the main themes of this film at the piano. In a case like this, where I’m writing more of a traditional film score, I like to grab a piece of paper and pencil and get out of the electronic world and sit at the piano for a number of days. Which I did, and I’m sitting there at the piano writing this theme and I’m starting to feel pretty good about this theme, but I’m not going to really be able to convince myself and give myself the confidence until I go back to the studio and mock it up. I walked away from the piano towards the studio thinking, ‘I think this is going to be French horns. I think that nobility [of the French horns] works, because nobility is one of the big words that came out of my discussions with Brian, and that’s one of the main character traits of Jackie that we want to make sure that we honor, because in spite of everything he maintained this noble presence.'

How did Brian Helgeland feel about the choice?

Well about half way through the process, once I was mocking up cues for Brian, he said, ‘We have to remember that Jackie is very special, and is a complete outsider, and not only is he different here, but he’s special. He’s the guy who’s going to do this. And the thing that the music has to keep doing for Jackie is just be Jackie, and remind us that he’s a really special guy and he’s doing very special things here.’ And it occurred to me that maybe along with the French horns, which usually all work in an ensemble, I needed a strong solo instrument. So I said let’s try a solo trumpet with this. And that served us very well, so that combination of the ensemble of French horns and the solo trumpet became the voice of Jackie.

You’ve worked with some hugely influential directors—do any memories stand out from working with them?

Well certainly these have been tremendous experiences. I’ve had wonderful experiences with Altman, and Bob Redford—I only did one picture with Sydney Lumet (Night Falls On Manhattan) and it was such a learning experience. I remember Sydney, when he first met me, he had a very dry sense of humor, he said, ‘So, I’m not sure about all of this, Mark—and I may not have these numbers right—I’ve done about 24 films, and 9 of them have had no music whatsoever, and this could be the tenth.’ [Laughs] I said, ‘Fair enough, let’s give it a try.’ And we ended up with I think twelve minutes of music.

What was it like working with Robert Altman on his hugely influential Short Cuts?

He was fantastic. What a great man and a great artist. I remember one time with him he had come to the house and we were working and I started to play back this scene, and he said, ‘Oh can you back it up a little bit, I want to really get into it.’ So we backed it up maybe forty-five seconds before the music came in, and we’re watching it, and all of a sudden I see this big smile come on his face, and I stop the film and say, ‘Bob, what is it?’ And he said, ‘Look at Lilly Tomlin right there—did you see that? That was complete honesty.’ And then he went into this description of how all he tries to do with his pictures is get moments of just pure honesty. It was a very big moment for me, learning about what you try to capture on film, and what communicates to an audience. If you can get a scene, an actor, a performance, a moment that just rings as completely true and honest, that’s what the filmmaking art form is all about.

You’ve also worked with your share of legendary musicians. Is there any parallel between working with giants in the music and film industry?

Well I think you work with someone like Redford, there’s a similarity to someone like Van [Morrison] or Joni [Mitchell]—they’re larger than life beings, and they have a vision. I think the best thing I can do is to get to know them and understand them so that I can contribute in a way to help fulfill that dream. As I did when I walked in and talked to Redford the first time about A River Runs Through It, he had a very clear picture and he played me some music of what he’d been listening to. And I’ll never forget, I think it was the second record I worked on with Van Morrison, when I walked into the rehearsal hall and he was playing Miles Davis’s In A Silent Way and he said, ‘I want to bring this into the music.’ So they’re giving you these invitations and clues as to what you can do to help them, and you can see that they’re already way out there in their creative mind, they’re already in the future, and they’ve already got a sense of where they’re going and what they want this to be. And it’s our job to help put it in the physical universe in present time.

You started an organization called I Buy My Music, which is a campaign that supports musicians' work—this dovetails with what we do on the site, which is support filmmakers (all of them, from the PA to the grip to the composer), can you speak to the parallel between supporting the creation of both music and film.

I think that’s one of the biggest downsides to the digital age—yes, it’s easy to disseminate information, but it’s also easy to pirate information as well. And it deserves to be protected, or else quite frankly, the business model is going to be altered. And it already has in the music profession. I think it’ s a matter of education, I think it’s a matter of putting the value back into the product itself. The positive side is I think the next generation is going to figure this out, and technology will come around in a way where it can support the product itself. It’s an education thing and an ethical question—you don’t walk into your neighbor’s house and take their car keys and take their car for the day, you just don’t do that. You return your library books. You try to keep the exchange with the society you live in correct, and we need to educate people that that song, that film, that television show is a product just as much as a head of lettuce or a car or anything else, and you have to pay for it, and you should pay for it.