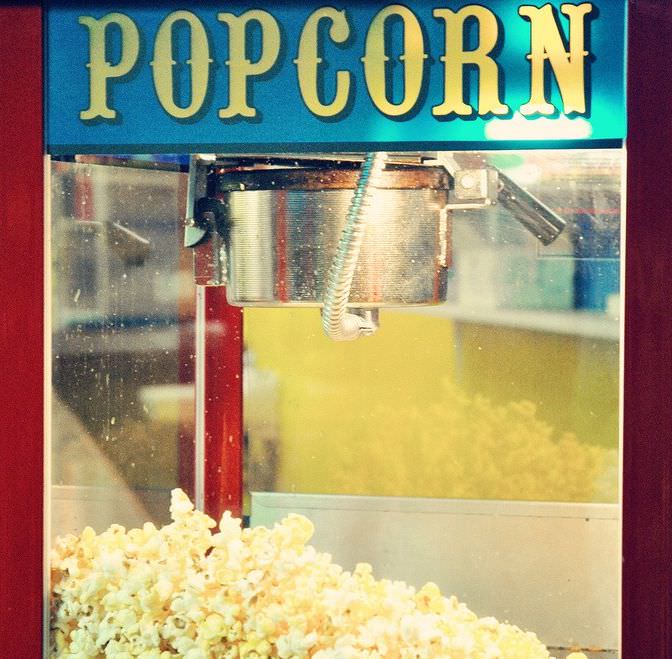 Extra Butter: How Popcorn Came To Be Cinema’s Most Beloved Snack

In honor of CinemaCon, we are saluting movie theaters everywhere with an entire week of theater-themed content.

For many, a trip to the movies elicits a Pavlovian response: As soon as you walk through the theater doors, an irrepressible craving for popcorn ensues. Since childhood, we’ve been conditioned to—and more importantly, allowed to—consume handful upon buttery handful of salt-dusted popcorn from the moment the theater lights go down until the credits begin to roll. It’s all part of the experience.

But how did popcorn and cinema-going become so inextricably linked? Why popcorn and not, say, potato chips? An examination of the relationship leads from the fairgrounds of the late nineteenth century to the Nickelodeons of the early twentieth, through the Great Depression and World War II straight through to the present day. Popcorn may be a simple product, but its central role in how we consume movies is anything but arbitrary.

Long before movies were a part of American popular culture, popcorn was a staple snack at carnivals, fairs, burlesque halls, and other entertainment forums. When the first portable popping machine was invented in 1885, popcorn became mobile, and therefore, ubiquitous.

The popcorn boom of the late 1880s was augmented by the advent of nickelodeon theaters in 1904. With 3,000 of these theaters operating by 1907, movie-going was quickly becoming the most American of outings. Savvy vendors capitalized on the trend by selling popcorn to the public as they entered the theaters, and before long, people became accustomed to crunching their way through films.

When the grand movie theaters of the 1910s and 1920s were constructed, theater owners were dismayed to find that they could not keep the popcorn out. Left-over kernels and burnt-corn fumes soon came to define the ambiance of the grand halls, just as it had the simple nickelodeons of the early twentieth century. A rift arose between theater owners and the roving vendors who plied audiences with popcorn before each showing.

When the Great Depression hit, however, theaters saw a critical opportunity in the form of popcorn. In an era where few people had any disposable income at all, movies provided a much-needed reprieve. Opportunistic proprietors leased indoor space to popcorn makers or began producing popcorn in-house, paving the way for the lucrative concessions sales that would come to form a huge portion of theaters’ revenue for the next century.  Suddenly, a few errant kernels on the theater floor seemed a small price to pay to keep theaters packed.

When World War II hit a decade later, popcorn got yet another boost: With sugar being rationed and candy scarce, popcorn cemented its role as the primary snack for the movie-going public. To bolster the cause, an ad hoc group called the National Popcorn Association was formed in 1946, touting the slogan, “Popcorn is a fighting food!” Suddenly, the snack was assigned a patriotic quality and became associated not merely with the movies, but with the perceived American spirit. When television rose in popularity throughout the ‘50s, threatening to keep viewers home rather than at public theaters, the promise of concessions—and popcorn in particular—continued to lure crowds.

And today, it’s rare to sit through a film without hearing the subtle crunch of kernels all around you. It’s not a question of will we eat popcorn at the movies, but of how. Large or small? Plain or butter-splashed? To share with friends or hoard for yourself? It’s popcorn—that simplest of snacks—that has, decade after decade, held its own and made the American movie-going experience that much more evocative, ingrained, and inspired.

A History of Motion Picture Palaces