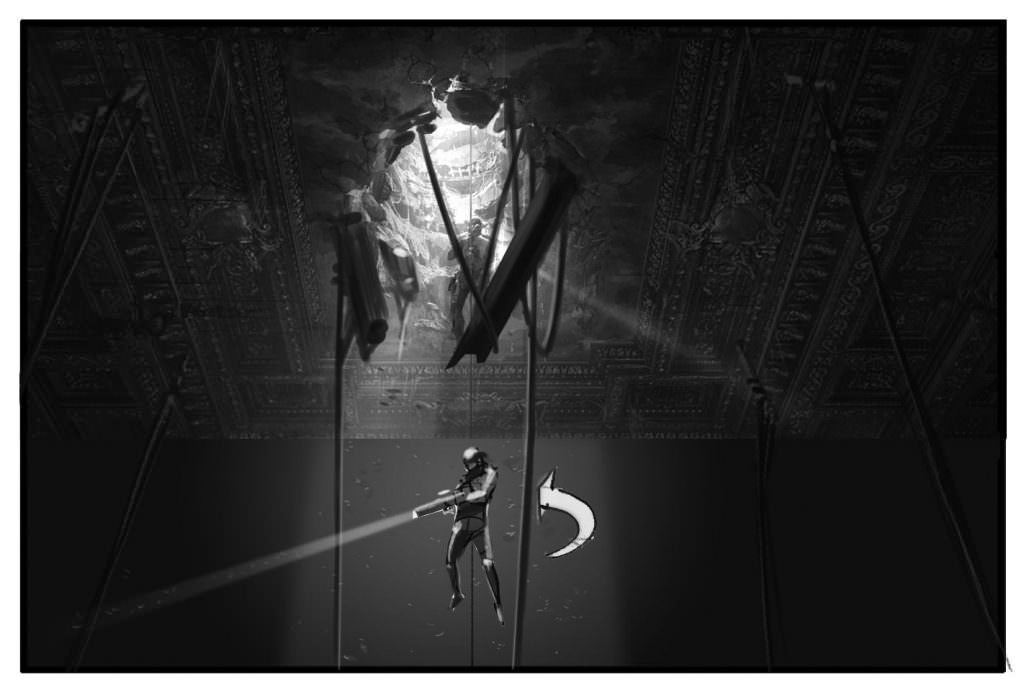 Drawing Inspiration: Sketching With the Storyboard Artists of Oblivion

Jack Harper (Tom Cruise) heads down to planet Earth — or what’s left of it anyway — to find a downed surveillance drone that has landed in the charred remnants of the New York Public Library’s Rose Reading Room. It’s only when Harper hits the ground of this cavernous space that he realizes he’s entered a trap. Someone — or something — wants to capture this drone repairman alive. 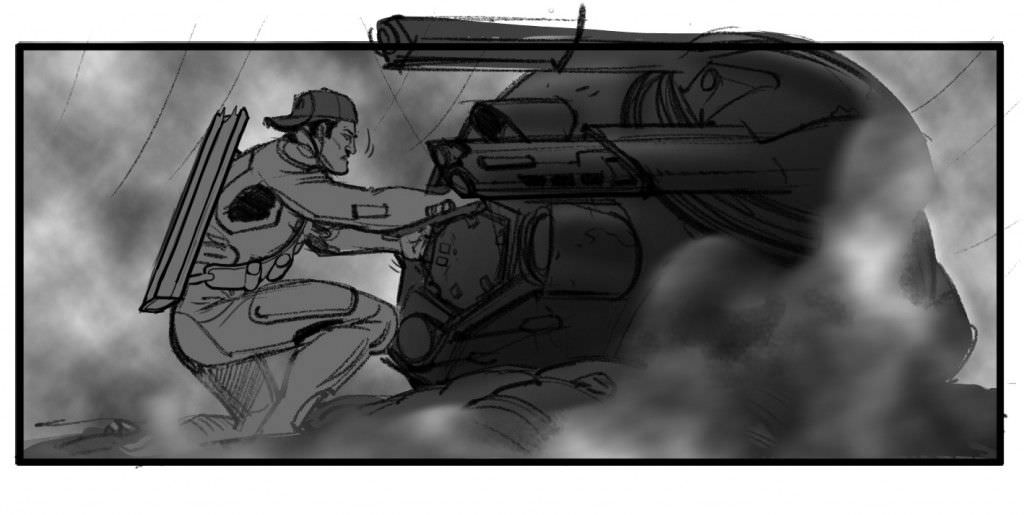 Whether he’s rappelling into a forgotten old library, flying through a lightning storm in his space age Bubble Ship or driving a motorcycle across the hulk of a George Washington Bridge long ago destroyed by alien invasion, each of Harper’s movements (not to mention the camera’s) was choreographed thanks to a sequence of storyboards. 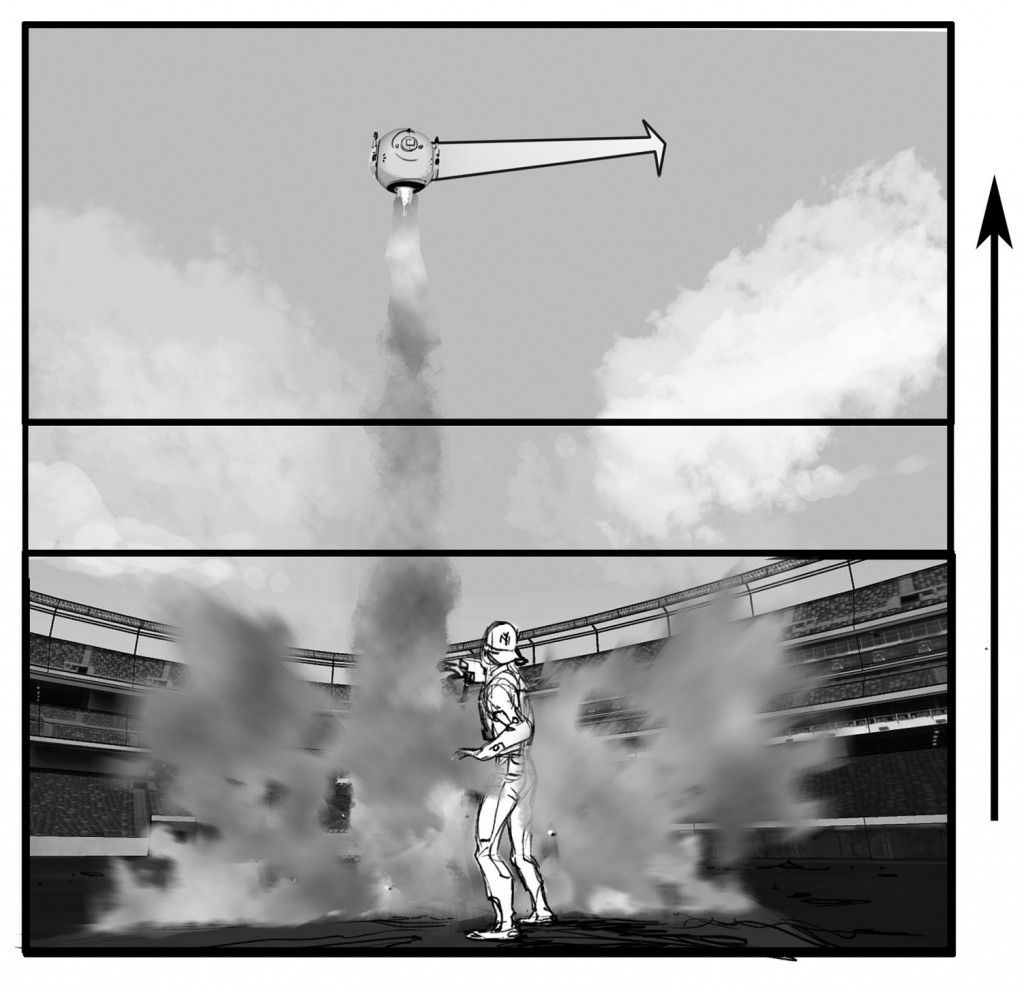 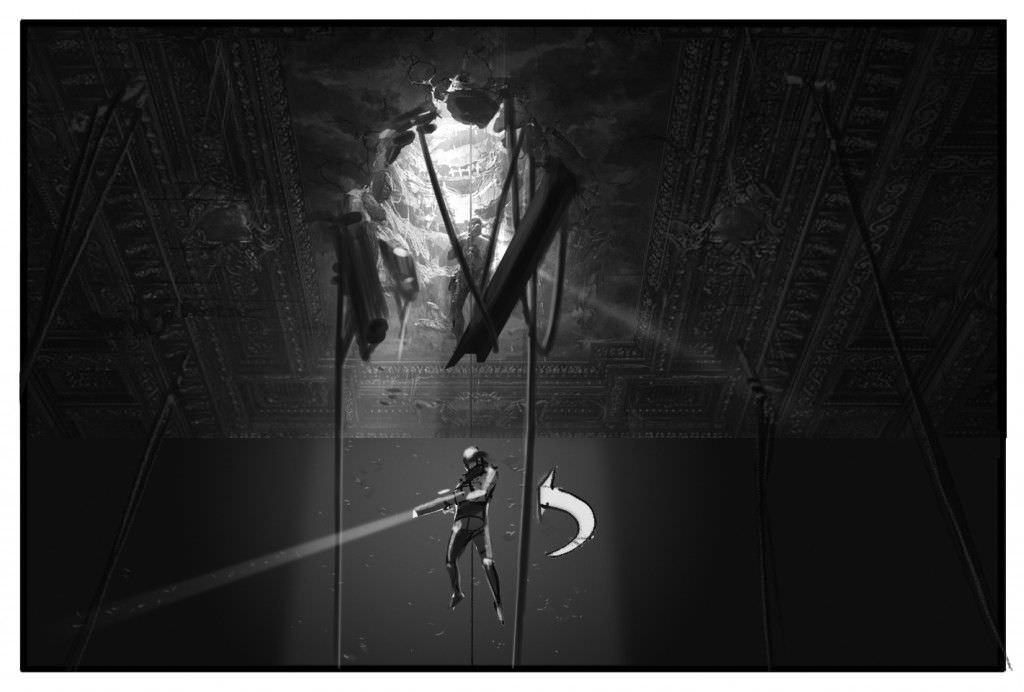 Based on a graphic novel that he wrote in 2010, Oblivion is just the second feature film for director Joseph Kosinski. A trained architect and visual effects designer, Kosinski has always understood the importance of storyboarding to visualize each frame of a movie before the cameras start rolling. And while putting pencil to paper (or stylus to tablet) may seem positively old-fashioned in the world of nine-figure blockbusters, a talented team of storyboard artists remains the first step in making any film unforgettable.

“You can draw it really quickly, put it on the wall and you kind of have a movie,” says one of Oblivion’s storyboard artists, Phillip Norwood, who counts The Abyss and Terminator 2 among his credits. “It doesn’t move, it has no sound, but if you know what you’re looking at, you see it.”

Each of Oblivion’s storyboard artists wore many hats — director, cinematographer, set designer, editor — in taking a first crack at bringing Kosinski’s screenplay to life. “Everyone sees something in their head when they read a script, but they don’t see the same thing,” adds Norwood. “You’re taking the words and visualizing them in a way so that everyone knows what the director wants to see.” 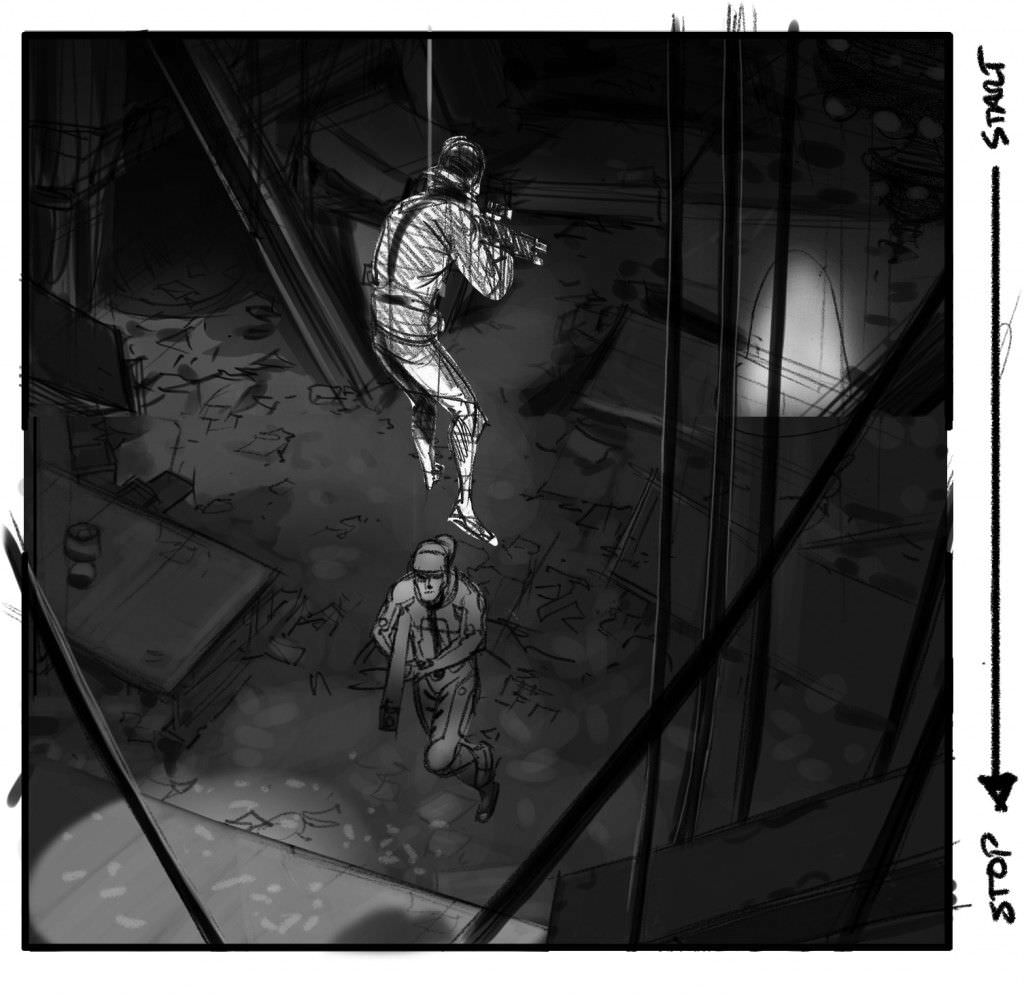 Sometimes Kosinski will have a crystal clear idea in mind, relaying his vision shot-by-shot to the artist tasked to draw that particular section of the film. Other times he’ll have only part of a sequence in his head, encouraging the storyboard artist to fill in the blanks. In either case, the process is one of trial and error, with the artists chipping away at the film one tiny chunk at a time until a finished product emerges. 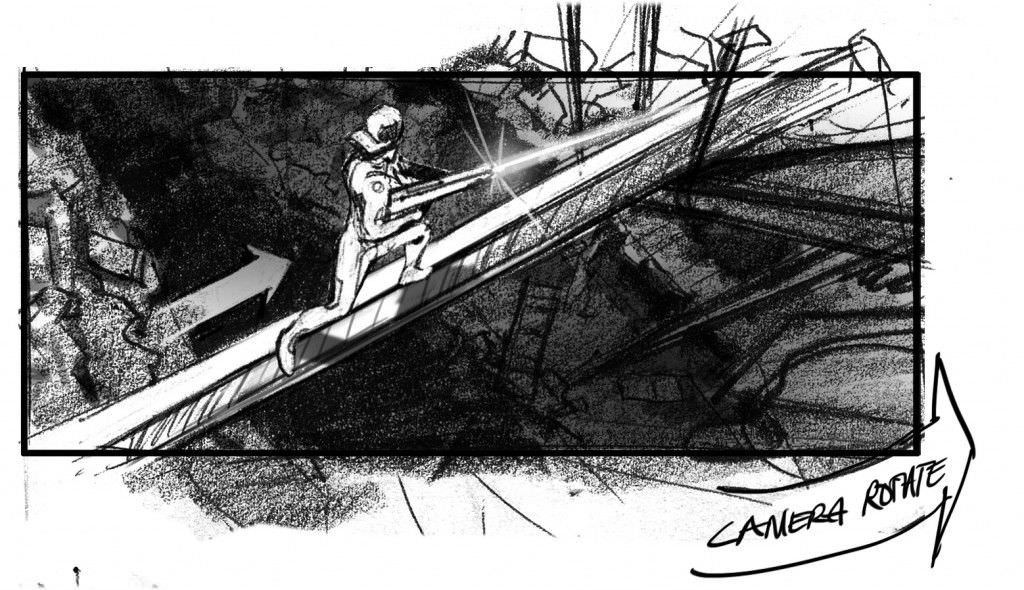 For a director as visual as Kosinski (see his debut, Tron: Legacy, for proof) the process is vital. “Joe really values the importance of having everything on paper or the computer screen before shooting,” says Richard Bennett, an Oblivion artist who has plied his trade on smash hits like 300 and The Avengers. “If it doesn’t work on paper, it most likely won’t work for the real thing.” 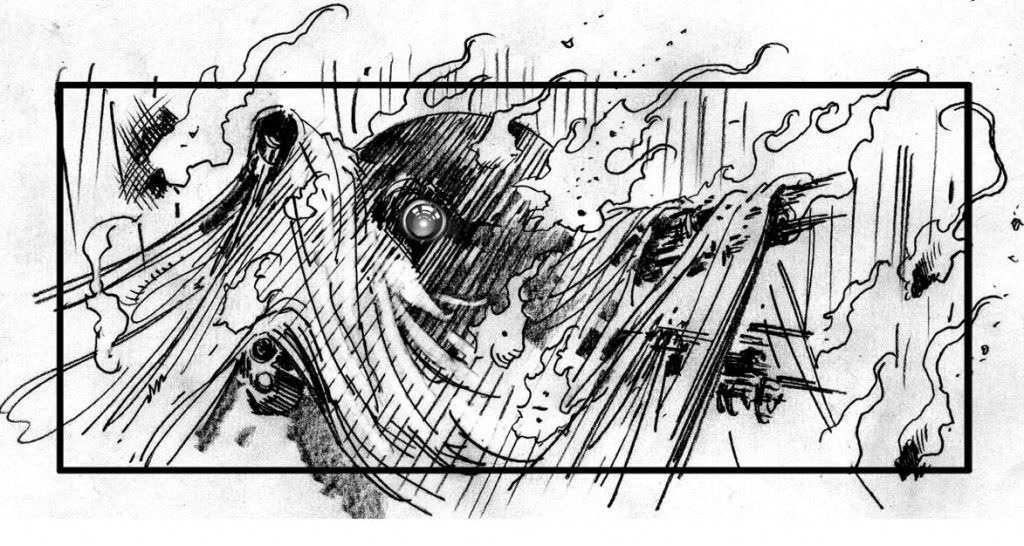 Whether they’re using old-fashioned pencil and paper or Cintiq, a combination monitor and tablet that lets an artist draw directly onscreen, the team knows not to get too attached to anything they create. “The idea is not to fall in love with the drawing,” Norwood explains. “You’ve got to feel free to say, ‘OK, these 25 aren’t working,’ rip them off the wall, throw them in the trash and start over.” 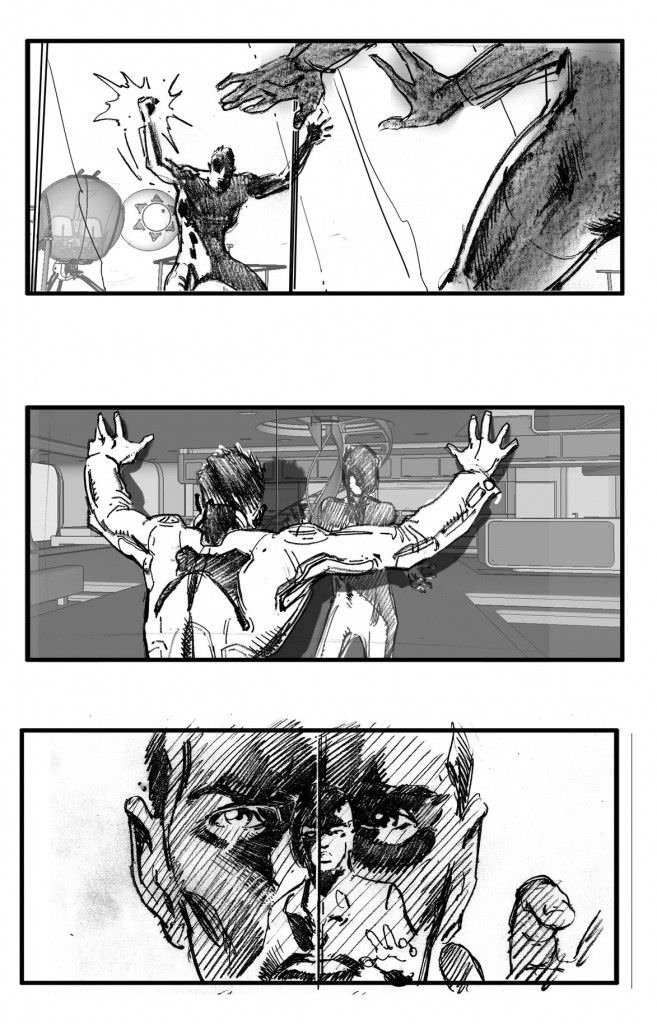 “I always say we don’t get paid to do nice drawings; we get paid to come up with interesting ideas,” adds Bennett, who learned from his 10-year career in comics that not even the best art can make up for a weak story. And as much as Oblivion’s art department pre-designed the film’s signature elements — like Harper’s iconic Bubble Ship, which was made into a 3D model the artists could play with for reference — Bennett and Norwood were free to add to the film’s concept design.

In a film that features firefights with rogue drones, pulse-quickening space chases, chillingly beautiful vistas of a post-nuclear Earth and even a sexy skinny-dip (hey, you’ve got to find a way to blow off steam after an alien invasion), it was the emotional range of Oblivion that was the highlight for artists like Bennett.

“I’ve always liked the idea of being able to handle anything that comes to my table,” he explains. “Joe gave me stuff that tended to be a little more moving, and that’s fine by me. I like action, but I like emotional scenes that let me work with shadows and reflections.”

For Norwood, it was the challenge of creating a post-apocalyptic Earth in 2073 that stood out. “I was a big fan of Planet of the Apes,” he explains, “and Oblivion really felt like the first part of that film where Charlton Heston is wandering around by himself.” (Director Kosinski would no doubt agree. If you look closely, what’s left of the Statue of Liberty’s torch zooms by in one chase scene — clearly a wink to Apes fans.)

Norwood and Bennett have moved on to new projects, but each will head to the theater to experience their handiwork firsthand. “To see it translated into real, live action is very fulfilling,” Bennett explains. “I’m always blown away. Hopefully whatever you’ve done is reflected in the final cut, but you learn by seeing how much of what you did is retained and how much is changed.”

True, it can be hard not to notice when the director opted to go in another direction — and just as jarring when Tom Cruise strikes the exact pose you dreamed up on your drawing table. But either way, it’s impossible not to get swept up in the action. “When a movie’s working you don’t care,” laughs Norwood. “You’re just along for the ride.” 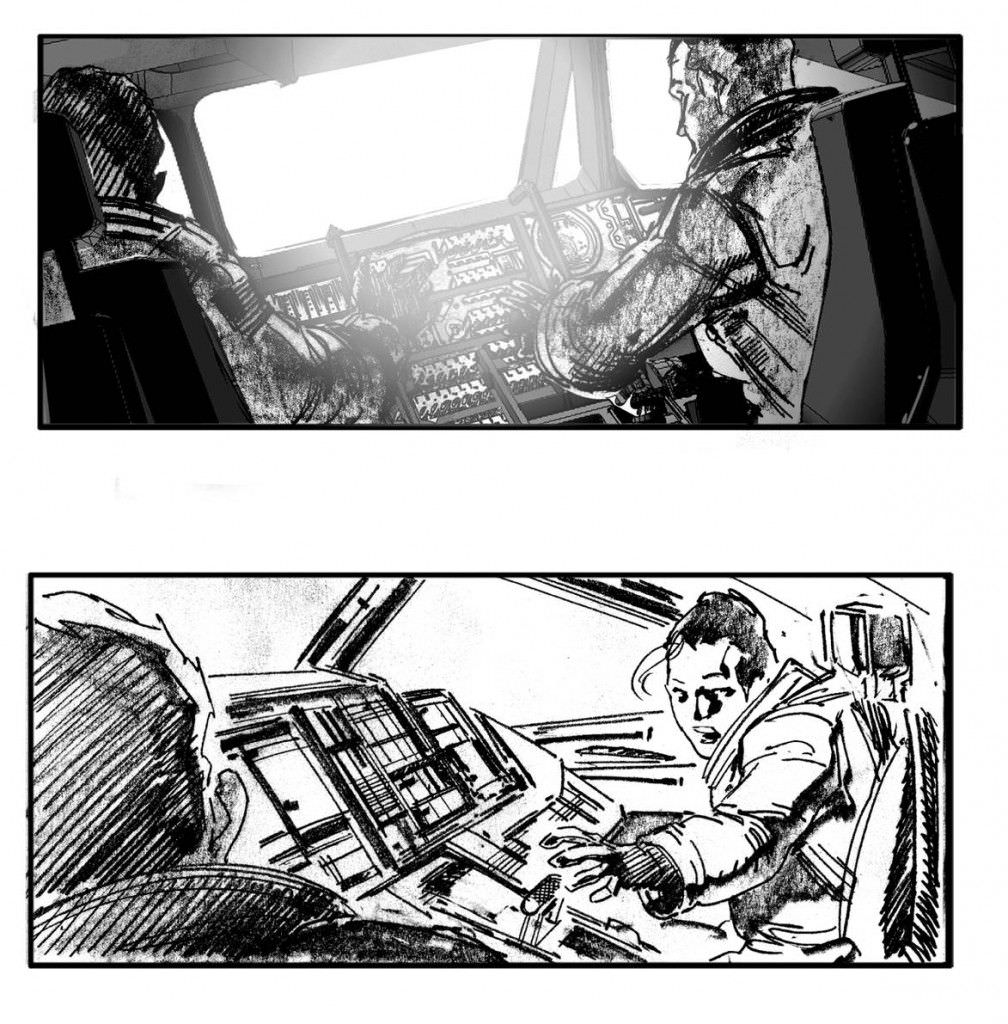