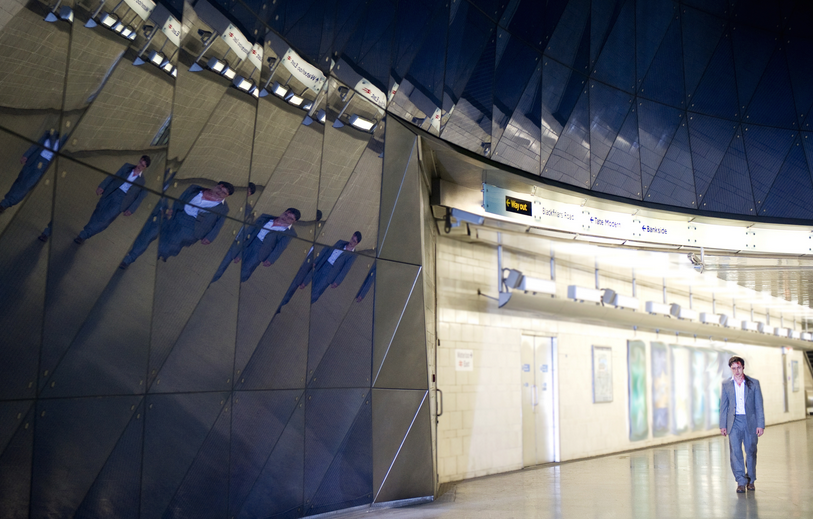 Cinematographer Anthony Dod Mantle Puts us in a Trance

Chances are you’ve seen the trailer to this weekend’s Trance, and while it may be an incredibly intense three minutes, you’re likely left with several questions. Fear not, many of them might never get answered. But that’s okay, according to the film’s director of photography, Anthony Dod Mantle. Trance tracks what is a largely internalized journey taken on by an art auctioneer-turned art thief (James McAvoy) forced to see a hypnotherapist (Rosario Dawson) to help him recall where he’s stashed his latest haul. It’s as exciting as any adventure you’ve been on with director Danny Boyle, the director with whom Dod Mantle collaborated on Millions, 28 Days Later, 127 Hours, and Slumdog Millionaire (which earned Dod Mantle his first Oscar in 2009).

And while he has shot several films with Lars von Trier (Antichrist, Dogville, Manderlay), Thomas Vinterberg (The Celebration, the Biggest Heroes) and Harmony Korine (Julien Donkey-Boy), when Dod Mantle speaks about Trance, he does so with the enthusiasm and modesty usually reserved for a first-time collaborator: “It doesn’t matter how many of these I do, I don’t consider myself an expert, I just have a viewpoint. But everyone on this shoot was deliriously confused—and not in a bad way—and there you have Danny scribbling notes into his Biro notebook, keeping this massive effort together. It’s just humbling to watch him. Especially on a movie like this where everything was a bit more complicated than normal for us.”

From his home in Copenhagen, Dod Mantle discussed how the two got it done. 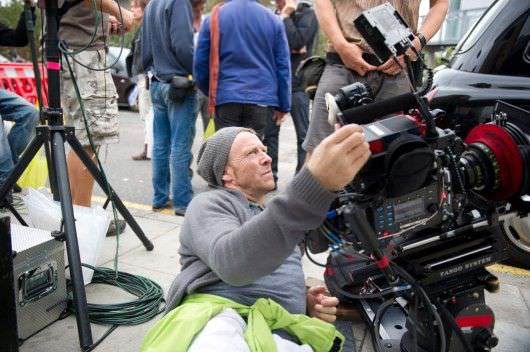 In a film like this, where there’s constant confusion about whether or not characters are in a dream state or trance, or living their reality. Did you sometimes feel like the only one on set who really knew what was going on?

(Laughs) Well, as a DP, sometimes the responsibility of bringing all of that together is horrific. is to see all of the work that all of the departments have put together coming together through your eye down a viewfinder. Sometimes you tend to have closer contact with actors in terms of getting in their heads and looking into their eyes. In that way we do see more, but that said, even when it’s said and done, I’m just as confused. 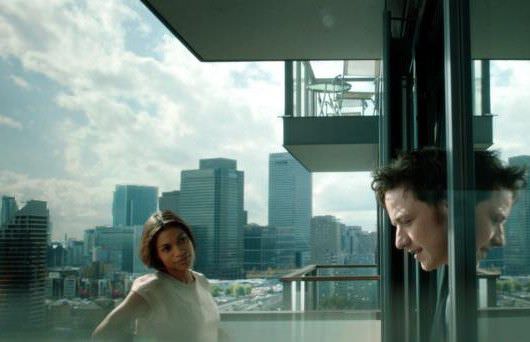 What was exciting about these three leads?

I know James McAvoy from working on The Last King of Scotland. He’s a lovely guy who’s moved on a lot in terms his dramatic palette and learned a lot in the last ten years. I loved working with him in his natural accent, which allowed his humor and irony to come through in a way that was almost musical.

Then you have Rosario Dawson, who my old friend Harmony Korine found for his movie Kids. Apart from being absolutely gobsmackingly beautiful to look at, she is also a lovely person. I’m not saying that’s what it’s about, because the story has to work and the character has to work, but she’s just delightful in her nature—she’s adorable and so loving and supportive and a total trooper. And the landscape of her eyes, with their secrets and their mystery… 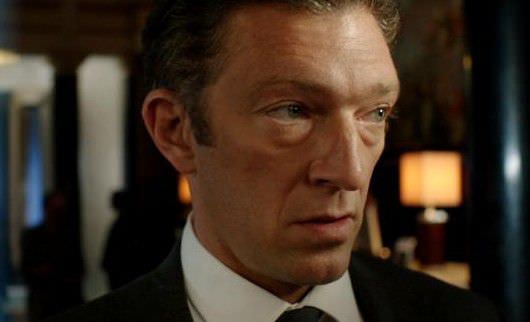 And then there’s Vincent Cassel—If you find yourself stuck in a corner shooting on just a gray wall, he’s the one guy who can fill up the entire frame. He is like a whole planet unto himself. His face, his eyes, his everything are just incredible.

Do the actors have a lot to do with why you choose to do particular films?

Initially I’m only focused on the story and whether it’s going to keep me engaged for half a year. Obviously it’s very difficult for me to say no to a story if it’s with a collaborator I love like Danny. There would have to be something specifically wrong with it, where I’d have to say, I want to work with you Danny, but not on this script, but that hasn’t happened as of yet. But with whomever it is, I contact the director and the producers really to determine what the intention around the film is. Then I’ll see who the actors are and if they make sense to me. And if I feel happy and comfortable with that, if there’s intelligence around the film, then we get down to work. I don’t go anywhere near a script that I feel averse about. Even if there’s a great lighting possibility or a fantastic economic advantage, I’m not really like that.

Your relationship with everyone on a film is so intimate. How do you get everyone to trust you at the beginning?

I can’t imagine why on earth they would! But it’s very important with actors. They have to trust the director, but they also have to trust the person behind the camera. And some actors and some actresses find themselves in far more edgy or more fragile situations than others, which some directors use and some go overboard with and abuse. But I haven’t had many trust problems with anyone except maybe Lars Von Trier, because he’s a bit of a case in his on right. We had a few issues on Antichrist, but that was freaky and odd and not what I’d call par for the course. (Laughs.) Danny is pretty amazingly still an enigma to me after 10-15 years of a close relationship. He’s still a mystery in some ways, and I mean that positively. He has an amazing intelligence, an integrity, and he’s very articulate about his passion for filmmaking. That’s why he’s so…tidy. He works really hard.

You must have a shorthand now with Danny. What’s your process like? Did you set out to do something different with this movie?

As long as we don’t get at each other’s throats and continue to make challenging films together, the advantage of that is that you get to know each other very well, and there’s a trust there. In this case, the script had a lot of intellectual body to it, so there was a lot of humor and intelligence attached to the film in the first place. We walk around the set or the location a lot before the rest of the tech crew gets there. Danny talks through the scene with me and throws a few things at me. There are several scenes that we end up adjusting according to the space, because so much of what we do is done in camera—very little happens in post-production. The space enhances the film and as you move further down the road, it affects all sorts of things.

What’s your starting point then?

We both take a lot of photographs of the space; I probably take more than he does. I take a lot of little snaps and strange photographs, and Danny looks at them and says, “That’s interesting. What’s that then?” And then we have a chat about it and suddenly ideas come in. On 127 Hours, we spent a long time working out how the hell we were going to keep the audience awake for 90 minutes with a guy stuck in a canyon. Slumdog was about keeping up with a mad director and chasing kids thirty or forty years younger than me in a slum. Trance was more technical, working with these infamously difficult locations full of shimmering surfaces to create a nightmarish reflection hell. It was great for the story, impossible to photograph. But those choices were all governed by the extraordinary spaces we chose to shoot in. Initially I thought I’d be using all sorts of flares and strange camera movements, but eventually it came down to really manipulating surfaces. 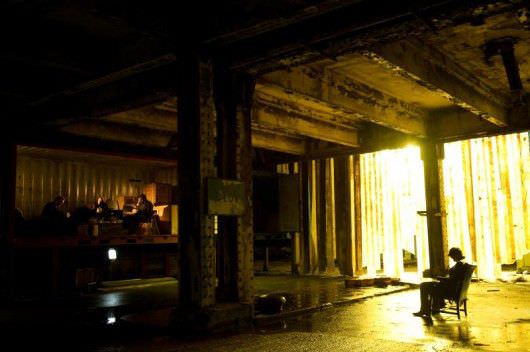 Do you have a map of the kind of films you’d like to do next?

I think it’s healthy, artistically, to fall in love with a story, to make sure it has some relevance to what you want to do or to take you somewhere you want to go. It helps if I feel I’m going to new terrain, and that’s just as much about a narrative as it is about possibly what I’m doing with my craft, what kind of camera I can use, how I light it and all that stuff that comes up afterwards. For me, each story should use a new alphabet to shoot something differently every time.

How does technology effect your storytelling?

When you immerse yourself in a story, it eventually becomes an avalanche of technology along with ideas and abstract thoughts to become an accumulation in my head. I pick things that have a certain rooting in the mischievous—either socially or politically, and then hopefully they also have strong poetic potential. I don’t get sucked toward massive technology pieces. If it doesn’t touch me really fundamentally and emotionally, then I wont’ go for it.

Do you think that’s common among DPs today?

Look, with a film like The Life of Pi, I respect its craft, and there was a story there with intelligence. Ang Lee is a really intelligent director, and it got its Oscars and all, but it didn’t reach me. I found it pedantic. I think some of the stuff they shot on the Amazon is unbelievable, some really incredible stuff, and hats off for that, but as a whole it didn’t really suck me in. It’s weird. I don’t know what the fundamental thing you’re asking about me—what gets me to put my boots on, but I guess it’s about politics, social conscience and poetry. It’s that balance.

One last question: as a filmmaker, how often do you think about the issue of piracy?

Every time I get my Academy screeners, I look at my kids and say, if you so much as think about putting this in your computer and burning it for your buddy, you’re dead. I was in Thailand recently, and I saw some of the films out there that hadn’t even premiered, same in Kazakhstan. It’s kind of absurd. And because of all the paranoia around it at studios, it’s getting a lot harder for us to access our own movies. Even when Danny and I were in Salt Lake City for 127 Hours. One time Danny couldn’t get his own film out of the edit room and into his hotel room to see it because security has gotten so tough. It has gotten deeply neurotic. But if you aren’t, the economic consequences are horrific, of course.