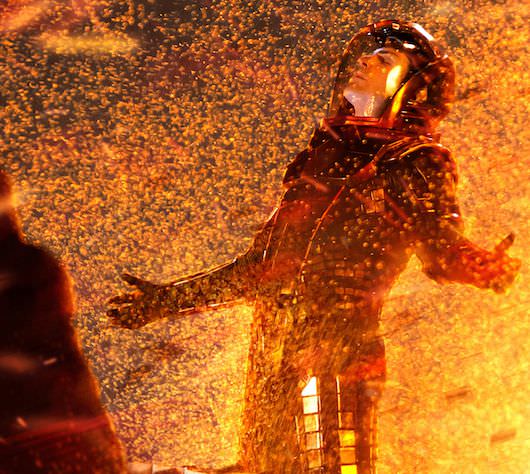 Today at CinemaCon, among panels on the movie theater's embrace of the digital world and the future of theater architecture, Paramount Pictures is putting together an exclusive presentation highlighting their slate of summer films and more. We've put together a little trailer rundown of three upcoming Paramount releases for your perusal.

Michael Bay’s Pain & Gain is an action-comedy-crime film, written by Christopher Marksu and Stephen McFeely, based on a series of articles for the Miami New Times by Pete Collins. The film is based on the true story of a group of personal trainers in 1990s Miami who, tired of being broke, get caught up in a criminal enterprise where the stakes inevitably rise and the trouble increases exponentially. Starring crowd pleasers Mark Wahlberg, as Daniel Lugo, and Dwayne Johnson, as Paul Doyle, the film is decidedly a different beast for Bay, coming off his Transformers franchise. The cast includes a slew of stellar actors, from Anthony Mackie (as Adrian Doorbal, the third member of their crew) to Ed Harris (as Ed Du Bois), the man hired to take down the muscle-bound marauders.

Before he tackles Star Wars, J.J. Abrams unveils Star Trek Into Darkness, his second outing at the helm of the Enterprise. The crew of the Enterprise is called home, only to find a malevolent force from within their own ranks which has destroyed the fleet and threatens to tip the entire cosmos into chaos. Captain Kirk (Chris Pine) leads a manhunt into a world defined by war in order to capture a single man, who himself is a weapon of mass destruction. The film looks like the darkest Trek we've ever seen—dark and thrilling. Abrams, having already proven himself as a master of the epic, from his previous Star Trek to the entire, wild world of Lost, appears to be in fine form heading into arguably the most pressure-filled project any director could take on. May the force be with him.

Based on the novel by Max Brooks, this long-gestating project directed by Marc Foster (Quantum of Solace, Stranger Than Fiction) and adapted by Matthew Michael Charnahan (The Kingdom, Lions for Lambs) follows United Nations employee Gerry Lane (Brad Pitt) around the globe as he tries to help stop a Zombie pandemic that is destroying armies and upending nations. World War Z was filmed in Malta, Glasgow and Budapest—this trailer offers a glimpse of that international scope and a real sense of horror. The film, which has been in the works since 2007, looks to be worth the wait.