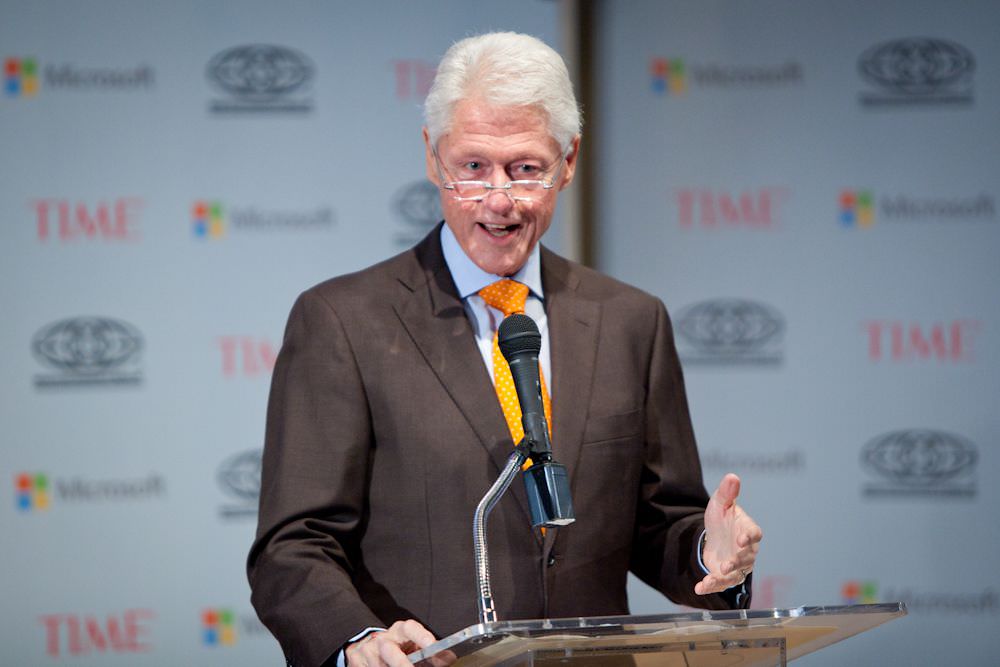 ‘Creativity’ might not be the very first synonym associated with the nation’s capital, but Friday’s D.C.-based Creativity Conference, presented by the MPAA, TIME, and Microsoft gave attendees good reason to rethink that. The first-ever event brought together leaders from film, politics, technology, and journalism, to talk candidly about the state of creativity in the U.S.

This unconventional union of top-billed leaders leant Friday’s conference a smattering of equally unique insights about creativity and innovation across several key industries. Whether it was Clinton’s call for a national innovation budget, Weinstein’s impassioned case for protecting entertainment content, or PBS CEO Paula Kerger’s plea to radically reimagine U.S. schoolroom curricula, it’s clear that creativity weighs heavily on the minds of today’s most brilliant thinkers. Here are a few highlights from the conference:

Creativity at Work and in Schools 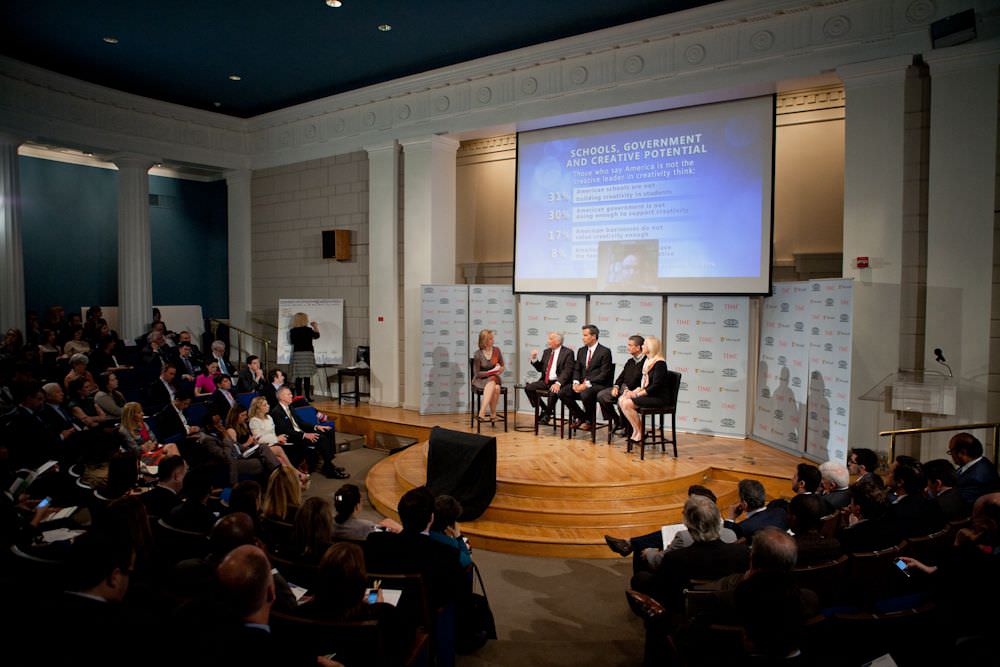 The panelists were unanimous in heralding the U.S. as a country driven by innovation and creativity. “One of the amazing things is how America has been able to empower creativity,” quipped Dr. Richard Florida. So how do we ensure a forward trajectory? Moderator Nancy Gibbs, Deputy Managing Editor at TIME asked, “What should government be doing?”

PBS’s Kerger called upon government to commit itself to making knowledge accessible.  She expressed her support for government-backed learning institutions, especially in the digital age. “You look at Jefferson’s tradition of starting the public library,” she said, “I like to think of public broadcasting as the library of the 21st century.”

From fostering teams devoted to creativity, to working toward a culture that encourages its citizens to take risks – and make necessary mistakes. “Being creative is a risk,” said Coge.org founder Partovi, “and every creative takes a risk at some point."

Panelists agreed that creativity could be better bolstered in education systems across the country. “Celebrating failure needs to be ingrained early,” said Monumental CEO Ted Leoni, and reflected that our education systems suffer from ‘success obsession.’

Kerger pointed out that education needs a major overhaul to reflect modern age behaviors. “What if kids learned about how [their video and computer] games were made at school?” Partovi argued that the skills children are taught in school aren’t very creative – like the graphing calculator, for instance. “The only job you’ll need to use that skill is if you’re going to be a math teacher,” he joked.

Having learned a few things about some of history’s most accomplished minds, Isaacson expressed caution at making creativity too much of a priority. “Einstein knew what was in the box before he thought out of it,” he said. 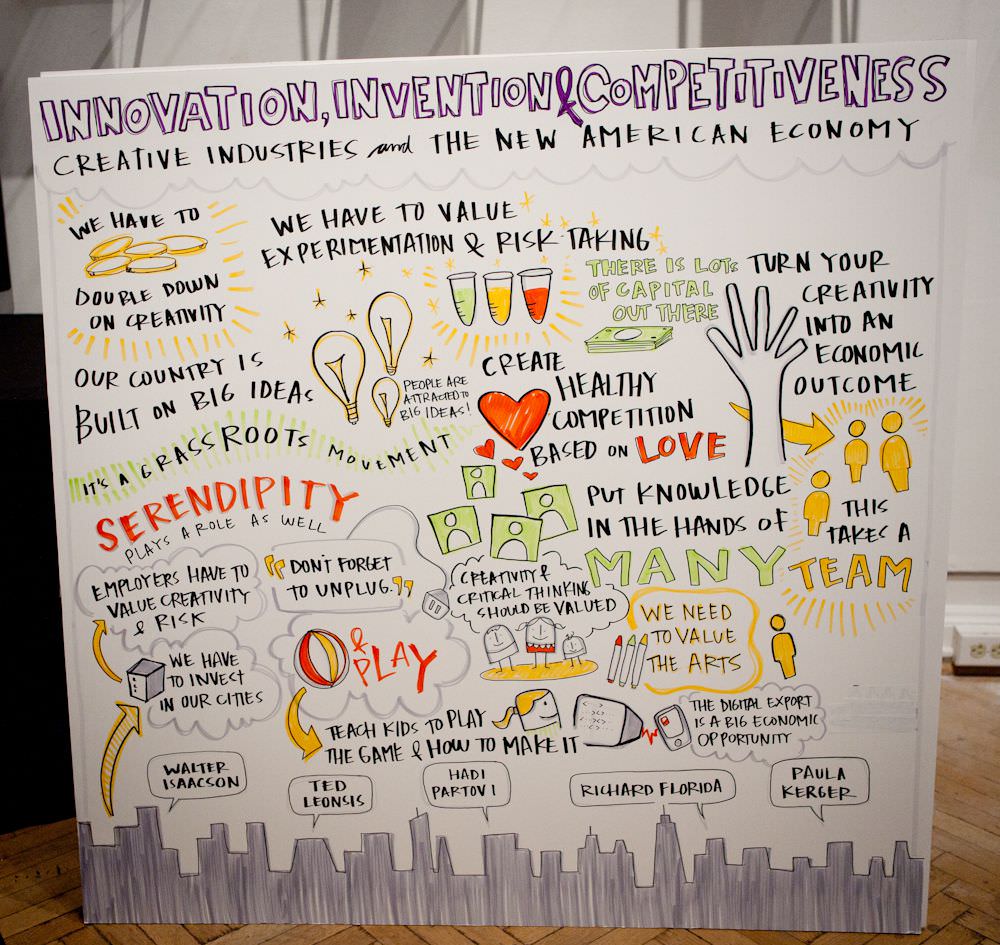 In one of the most impassioned portions of the day, Hollywood film producer Harvey Weinstein delivered a bold and colorful missive on the state of creativity in the U.S., and how integral it is to put protective measures in place.

“Creativity in my industry is teamwork,” he said, and talked about the struggles – and payoffs – of working with others to create art. His job as producer mandates that he must often alter the work of some of Hollywood’s most visionary veterans, and he attributes his success to his ability to challenge directors, including his long time colleague, Quentin Tarantino. 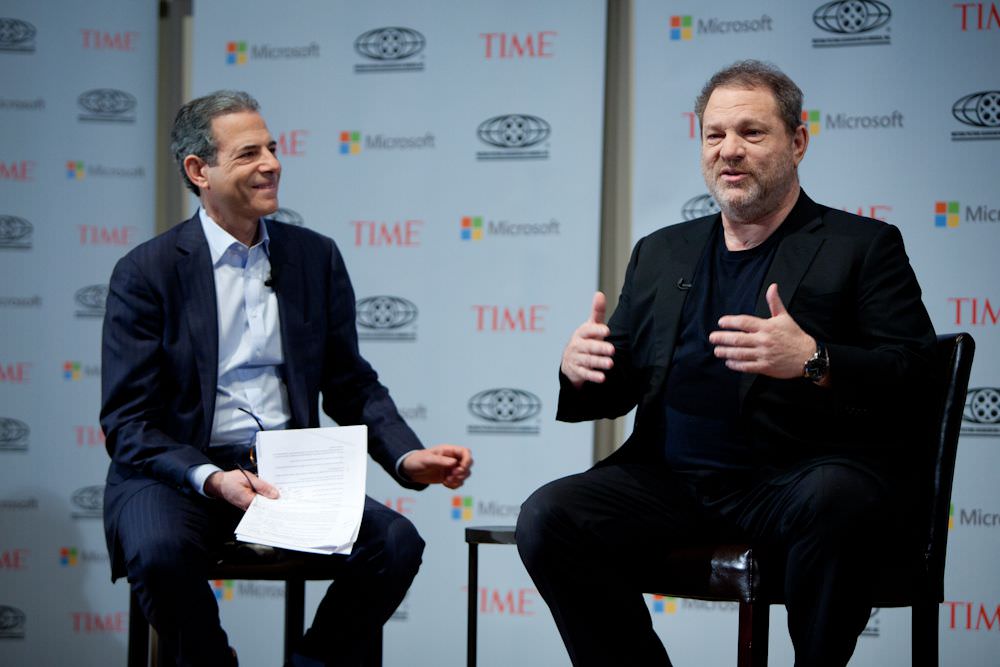 The second half of Weinstein’s presentation focused on the future of the industry. “Technology is a godsend,” he said. “It allows for experimentation, and it has brought the price of making movies way down.” But Weinstein also pointed to the consequences digitalization has brought creative industries, like the prevalence of piracy and the growth of companies that profit from stolen creative content.

How shall we rectify the situation? “You can start by paying the artists,” Weinstein said, noting the swift blows artistic industries have been dealt in recent years, from the film industry, to journalism, the music business, and publishing. “The starving artist is a myth,” he said, “artists can’t be artists when they’re starving.”

Weinstein urged the audience to hold tech companies responsible for aiding in the dispersal of pirated content. “We can all have a very sane bottom line,” he said, “but the gatekeeper needs to pay the artist.” 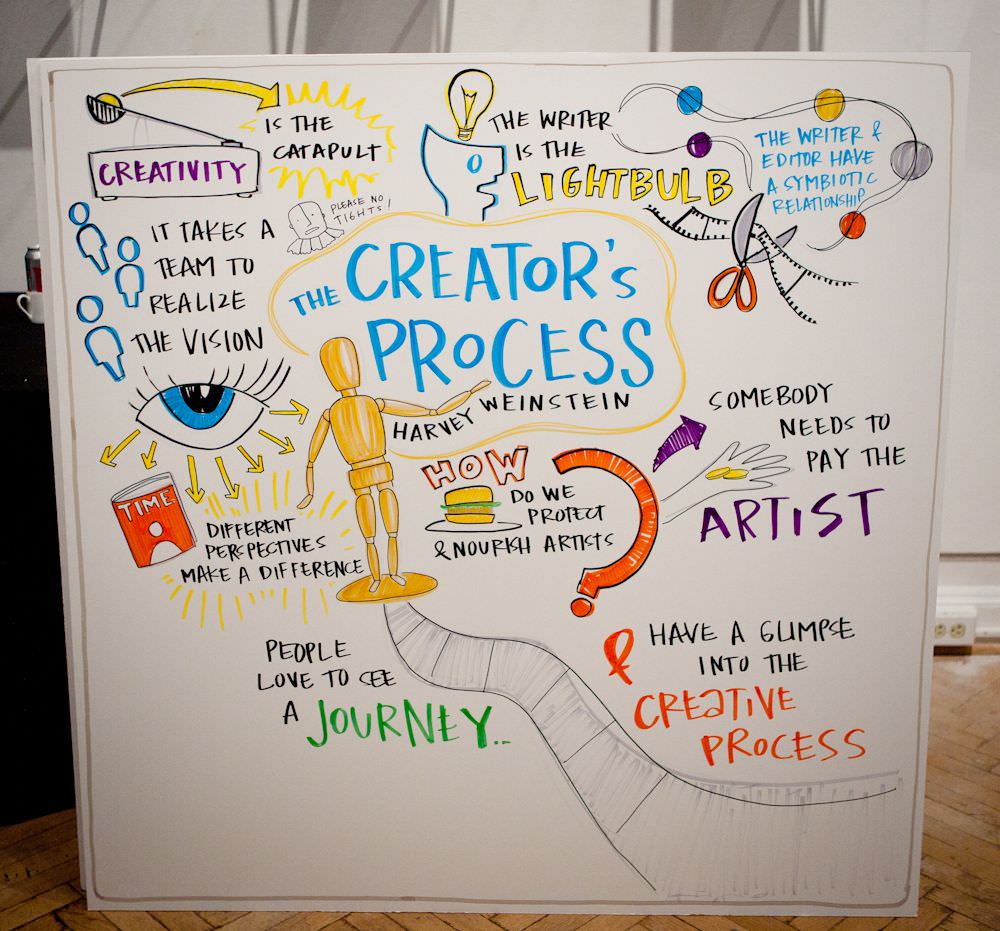 New Creativity for Generation Next

The last panel of the day brought together Distinguished Microsoft Scientist Steven Bathiche; Sony’s Chief Digital Strategy Officer Mitch Singer; The New York Times columnist Frank Bruni; and Beasts of the Southern Wild filmmaker, Benh Zeitlin. Together, the panelists discussed at length the ways in which technology would empower the next generation of creatives.

As the youngest panelist on the stage, Zeitlin gave insight into the new generation of creators and makers. "I work in a collective of artists that tries to empower many different people at once," he said. Zeitlin theorized that the myth of the 'lone wolf' artist may be more outdated than ever. "A log cabin on the mountain, as an artist, feels kind of old," said the New Orleans-based filmmaker. "The digital age gave us the ability to move." 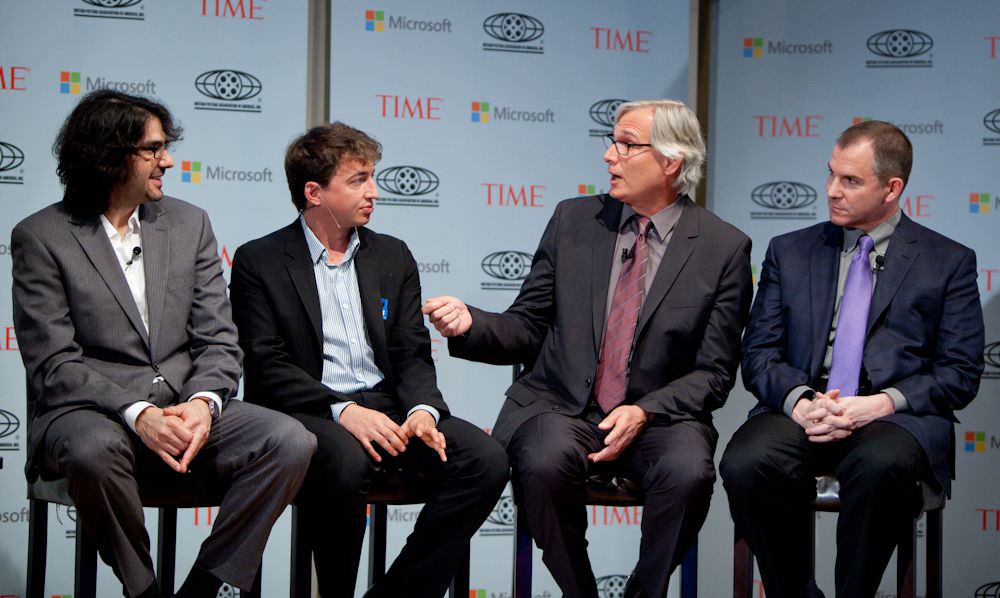 The same mobility is the driving force behind Hollywood's latest investment in Ultraviolet. Sony's Mitch Singer weighed in on how the cloud-based film storage technology is inspired by the next generation's need for greater flexibility. Ultraviolet allows users to share their films with friends and family, and to access their content with an unprecedented seamlessness. "Problem solving for the millennial…they're going to turn to the Internet," Singer said, "this generation is going to change the way we think about everything."

New York Times columnist Frank Bruni suggested that the new generation wants to interact with creative content. Bruni pointed to the wild success of the television show Scandal as proof that live-tweeting has given the show an alluring new dimension. "I think we want things these day that will be participatory," he said, "so much of what we do is to enable us to weigh in on [entertainment content] in real time."

Microsoft scientist Steven Bathiche urged the audience not to be intimidated by the many recent advances in technology. "Technology doesn't change who we are," he said, "it just allows us to do the things that move us." Still, the scientist reminded everyone that substantial innovation isn't instantaneous. "Seatbelts, remember," he said, "took a decade to enter the zeitgeist." 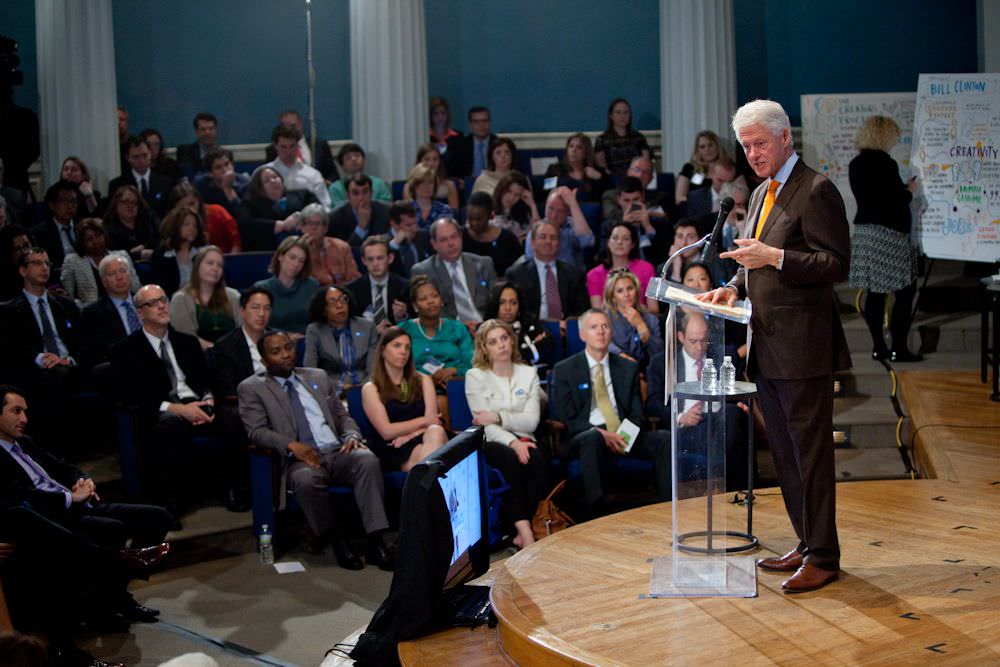 After a warm introduction from MPAA Chairman Senator Chris Dodd, the conference closed with a keynote from a truly historical figure – former president Bill Clinton, who delivered a moving account of how far we've come as a species. "Nothing is permanent," the former president began in a poetic meditation on human resilience, mankind's propensity for innovation and progress, and "the creativity of cooperation." Here, Clinton discusses the benefits of working in groups to better solve problems:

Clinton pointed to the benefits of establishing a national innovation budget. Whether it's foraying into space, or constructing works of art in film, paint, music, or literature, Clinton theorized that the government should be doing its part to empower innovation and creativity in our communities. "It would help a lot," the former president said, "if there was an explicit innovation budget for the Federal government."

Judging by the standing ovation that punctuated the end of his speech, it was clearly an idea that resonated – and to get an audience that spans business leaders, politicians, artists, tech experts, educators, and law makers on the same page is a truly spectacular feat. 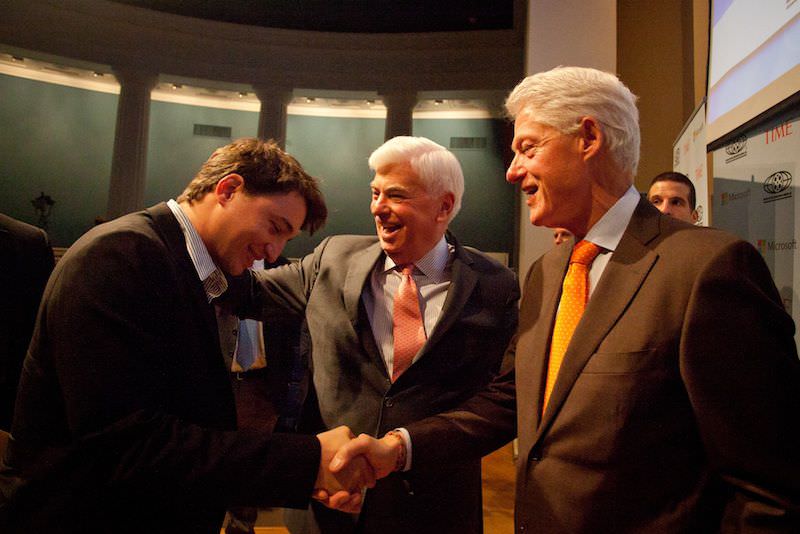