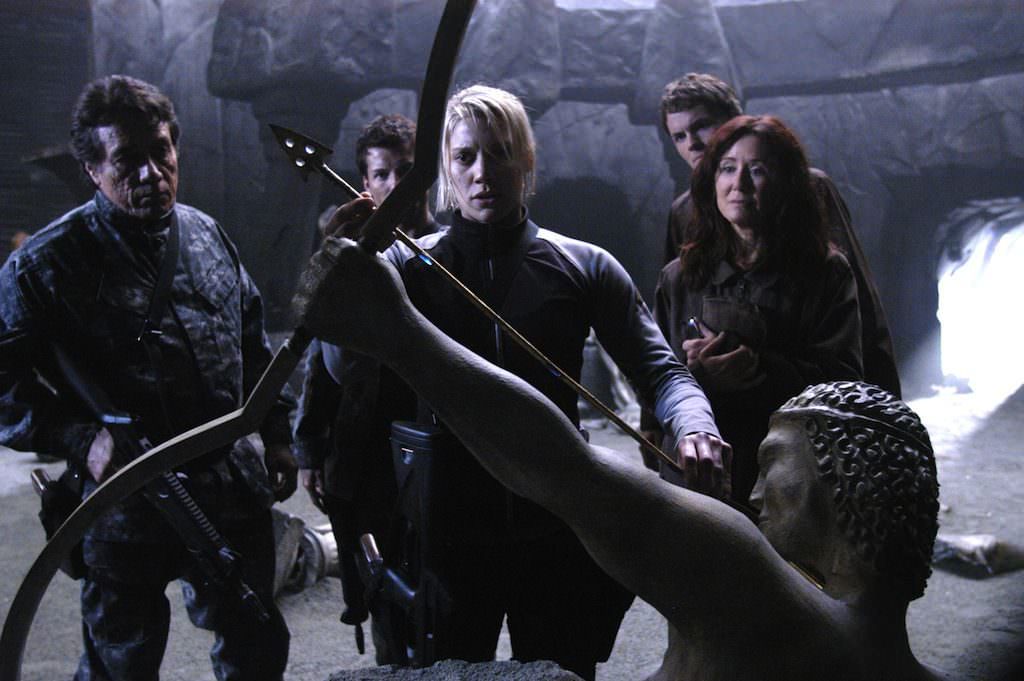 Veronica Mars Takes Hollywood By Storm: We Imagine The Next Back-From-The-Dead Kickstarter Projects

The wildly successful campaign for the Veronica Mars movie brought in $4 million in mere days, making Kickstarter a viable interest-vetting platform for Hollywood. As rumors continue to volley about the potential resurrection of long-forgotten or ended-too-soon series, sequels, and one-offs, industry insiders have been prophetically asking: does the digital model of supply-and-demand mark a new era of movie-making as we know it?

How'd it happen? Kristen Bell and director Rob Thomas issued a heartfelt call to their fans to fund bringing the short-lived UPN cult television franchise back to life once more—this time, for the big screen. In support, Warner Bros. agreed to greenlight the movie if the campaign garnered enough interest. In a twist that could have been pulled right from a movie script, Bell and Thomas got an unexpected windfall of support; the project reached $1 million in four hours and twenty-four minutes, and $2 million in 10 hours – making it the fastest-funded movie on the fundraising platform.

The project swiftly gained attention from industry insiders, largely because the success of Veronica Mars was fleeting from the start. The series lasted a mere three seasons before UPN pulled the plug in 2007. But for fans across the world, the Kickstarter success evinced that a Veronica Mars resurrection was only a matter of time.

So all of this got us thinking: what Kickstarter projects would we like to see next? Here's a very subjective list of film and TV shows we'd love to bring back proper, to the big screen (and yes, we’ve taken the liberty of providing potential plot lines, should these dream films not yet have a proper spec script):

Seinfeld, The Movie: Audiences across the globe still mourn the loss of Jerry, George, Kramer, and Elaine from Thursday night primetime TV. But now that Kickstarter’s around, wouldn’t it be great to see a reunion fit for the big screen? Just imagine: in a stroke of ironic fortune, the gang’s relieved from their prison sentence on account of incessant complaining and “never-ending inquiries.” Naturally, they all move into a transitional living home, where their sarcasm is put to the ultimate test (don’t worry: Newman lands a job working for UPS – and a neighbor at the half-way home – read: Jerry’s new apartment – receives a surplus of suspicious packages). Jerry would be asking, "what is the deal with having a curfew?"

Twin Peaks, The Movie: We all might know who killed Laura Palmer, but we still got pretty darn attached to the colorful characters of David Lynch and Mark Frost’s iconic cast in the ill-fated CBS drama Twin Peaks. We’d love to see Lynch and Frost take another crack at the series for the big screen. Yes, there was Twin Peaks: Fire Walk With Me, that functioned as both a prologue and epilogue, but was anyone truly sated? Why not just pick up where it left off – by giving audiences some closure on Cooper’s inexplicable breakdown and that unresolved cliffhanger? Maybe we discover Twin Peaks is really an experimental mental institution. Or maybe Cooper was wrong all along. Possible movie tagline: Who really killed Laura Palmer?

Freaks and Geeks, The Movie:  Ok, full disclosure: we love Paul Feig and pretty much anything he touches. But we’re especially fond of his first TV project Freaks and Geeks. After all, without the short-lived, expertly-nuanced high school drama, we might never have seen the illustrious acting careers of legends Seth Rogen, Jason Segal, and James Franco. We’d be thrilled to see the gang reunite for their high school reunion (and to have an uber-meta narrative wherein Mr. Daniel Desario returns, reinvented as the talented actor, James Franco).

30 Rock, The Movie: 30 Rock fanatics were mostly pleased with the series' farewell. Liz and Jack finally silenced the "will they or won't they" chatter and said the L-word (in a LYLAS sort of way, of course). And while 30 Rock's loyal fanbase mourned the show's departure, most found a silver lining in how it freed up Tina Fey to write / star in films, and even work on a Mean Girls musical. But that doesn't mean there isn't plenty of room for a 30 Rock film – the show's live episodes were among it's best, and TGS (the show within the show) was always a beautiful disaster. So what about a two hour live, TGS? If anyone can figure out how to make a movie live, it's Tina. Bigger miracles have been performed; after all, she made The Golden Globes funny.

The Sopranos: It is not hyperbole to say that the last scene in the final episode of The Sopranos was an instant classic, and also, perhaps the only time in television history a TV show made millions of people simultaneously scream in horror…because they thought their cable had gone out. Well, a Sopranos movie would solve the ultimate mystery of those last few minutes–did Tony survive or was that sudden blackout the result of a bullet to the back of the head by the man in the  Members Only jacket? A Sopranos movie would put that question to rest (because one can't imagine a Sopranos film without Tony), but millions of Sopranos fans – us included – would give up the mystery for two more hours with Tony and the gang. Maybe we'd finally find out what happened to that Russian in the woods.

My So-Called Life, The Movie: For some of us, Jordan Catalano is still a household name. This genius mid-90s drama was a refreshing take on high school life – and it put Claire Danes on the map (note: if Homeland ever gets canceled, it has a place on this list). We’d love to see a big screen feature wherein Angela has to raise her own angst-ridden teenage girl.

Battlestar Galactica, The Movie: This television series, turned mini series, turned television series again needs to be brought to the big screen; it's obviously an idea too good to let go of. Even Portlandia riffed on how absurdly good the show is. So why not bring the darkly-nuanced space epic to the movie theater? And no, we're not even going to attempt to offer the brilliant Ronald D. Moore a plot angle — even in jest, that would be downright sacrilege.

Murder, She Wrote, The Movie: Yes, we're serious. When Murder, She Wrote went off the air after 12 seasons, there was talk that Angela Lansbury was worried about a hectic work schedule as she approached age 75. Today, Lansbury is 87 and still acting. In fact, she's performing as the lead in Driving Miss Daisy this month. As recent as 2011, Lansbury expressed interest in reprising her role as the iconic Jessica Fletcher. We'd love to see her team up with a tech-savvy detective – hey, Veronica Mars, need a new sidekick? The show was always remarkably smart and funny. In fact, aside from a Veronica Mars collab, the only other update we'd like is changing Jessica's typewriter to a MacBook.

Deadwood, The Movie: If we were writing this up the Deadwood-way, well, this would be a highly articulate string of expletives in a baroque, only-David-Milch-could-write-this monologue. Short of that, we'll just say that legions of fans would be really _______ happy to give South Dakota's very own Hades the big-screen treatment. We all know Hearst got off too easy, and there will never, ever be enough Al Swearengen (the great Ian McShane) in our lives. Perhaps Sheriff Bullock (the also great Timothy Olyphant) and Swearengen can team up with the enraged Tolliver (Powers Boothe, perfectly cast) and go after Hearst? Make. This. A. Reality.

Pulp Fiction 2: Even Pulpier: Who wouldn’t give up a prized possession for the chance to watch Quentin Tarantino’s iconic film get the sequel treatment (and who isn’t swooning at the thought of a follow-up soundtrack)? Considering there’s already speculation about Travolta signing on for a prequel, we think there’s plenty of demand for more Pulp Fiction—and especially more Samuel L. Jackson in one of his best roles to date—on the big screen.

The Wire, The Movie: One of the greatest TV dramas, period. We like to think that whenever The Wire turns into a movie (it just has to, right?), it will be just as genius, gritty, and strangely beautiful as the HBO series is. Just fuse together any of the many story lines surfaced throughout the show’s airtime, like; would McNulty and Lester find a way back into the Baltimore Police force, and if not, what the hell would they do? And clearly Marlo wasn't taken with the white collar business world—but how could he rise to power back on the streets with his main enforcers dead or beyond bars?