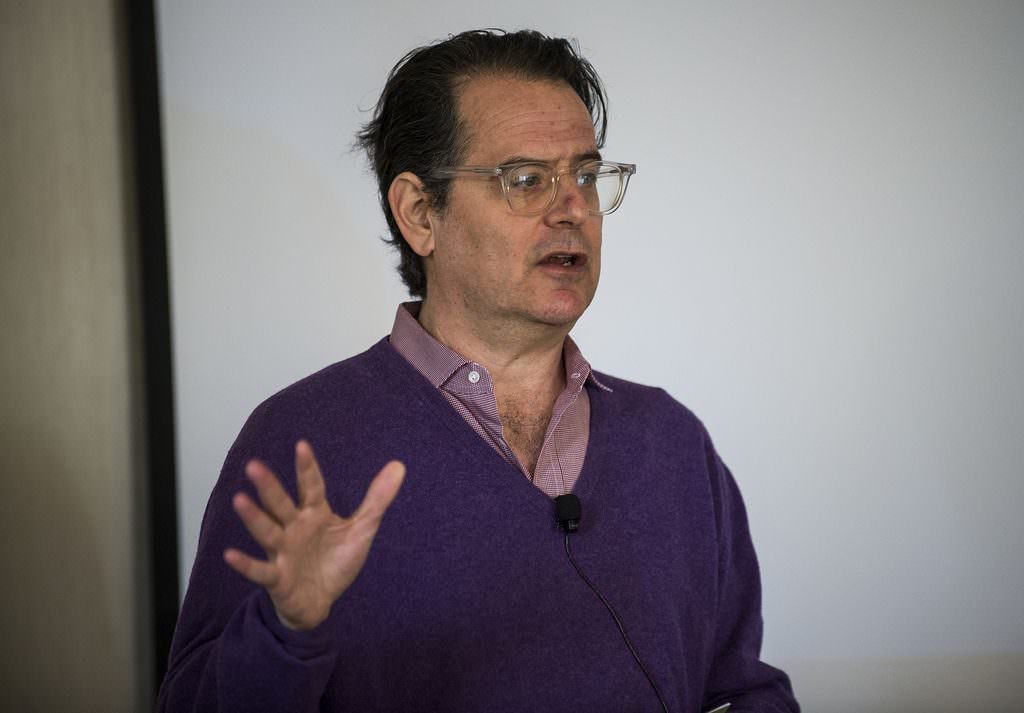 Everyone knows ‘seeing is believing,’ but master music supervisor Randall Poster will tell you: what you hear in motion pictures is just as tantamount to the images whirring across the screen. Poster is one of the most sought after music supervisors in Hollywood (a sampling from his impressive oeuvre: Rushmore!, Velvet Goldmine, Boardwalk Empire) —and he brought his prowess to TED2013, where he hosted the dynamic MPAA sponsored-Master Class, Hearing Is Believing.

The subject of Poster’s standing-room only talk centered on the cataclysmic contributions audio has gifted the world of film. His talk took TEDsters on a melodic tour de force of music in film—starting with the admittedly schmaltzy, but downright nostalgic, ‘photoplay’ music of the 1920s.

Photoplay, a genre Poster happened across entirely on accident while researching music for Boardwalk Empire, consisted of studio-constructed sheet music that was used to incite emotional cues during the otherwise-silent films of the ‘20s. Via live performance by an onsite pianist, Poster sprinkled his talk with a few of photoplays’ best offerings: a quick-paced number frequently employed in chase scenes and good-old-fashioned Westerns, ‘Elegy,’ a piece to accompany sad scenes and matters of the heart, and  ‘In a Merry Mood,’ for light, comedic situations.

Poster’s Master Class reveled in the fact that music provides an invaluable emotional component to cinema—and the workshop was as personal as it was instructive. The music supervisor recalled powerful scenes from his favorite movies, like the legendary whistling scene from The Jazz Singer. “Al Jolson sings,” Poster said, “and the world of movies is never the same.”

And that couldn’t be more true; this Master Class proved that when it comes to film, music is a whole lot more than mere accompaniment.

Poster underlined the dramatic effect music has—not just on our emotions as viewers—but on the psychology of a character, the passage of time in a film, and as a way to delve into the world of story. He referenced the Simon-and-Garfunkel soaked The Graduate. “In only 10 shots and the length of a song,” he observed, “we see a character go from being a child into a man."

As a music supervisor, Poster oversees all the musical elements of a film. That means Poster helms tasks like sourcing songs for a film and getting the rights. In addition, he’s in charge of making sure actors look like they know how to play instruments properly, and that music-wielding outfits that appear in films—from wedding bands, to radios—sound as realistic as possible.

But Poster’s job can be as fickle as it is, well, awesome. Despite his many successes, he admitted that finding the right song, “isn’t a science, rather, it’s a bit of an emotional pin-the-tail on the donkey.”

In fact, picking the right song can be a tall order. “Because of the distractions of modern life, audiences don’t necessarily have the same patience to sit through certain pieces,” Poster reflected—and emotional connections often have expiration dates. “What an audience in the 1920s would find emotional [like the photoplay genre], audiences in 2013 might think it falls short,” he said.

In a revealing Q&A Session, Poster explained the challenge of navigating an ever-evolving industry, working closely with directors, and making sure to avoid songs that come with too much baggage. “Let It Be by the Beatles is kind of kryptonite,” Poster reflected, “it’s too powerful on its own to put in a movie.” Same goes for Gangnam Style, which, instead of signifying a moment in time, runs the risk of driving audiences right over the edge. “Sometimes,” he reflected, “when the music is invisible is really when it’s working the best.”

When asked what he’s learned during his prolific stint in the industry (he recently worked on Skyfall, The Heat, and The Hangover 3), Randall Poster remarked, “The secret to the success of my career has been the great directors I’ve been able to work with,”—a list that includes legendary filmmakers like Wes Anderson, Jason Reitman, and Sam Mendes. The music supervisor flashed a grin and paused, “And when a director doesn’t pick a song I love, I don’t cry anymore,” he joked.