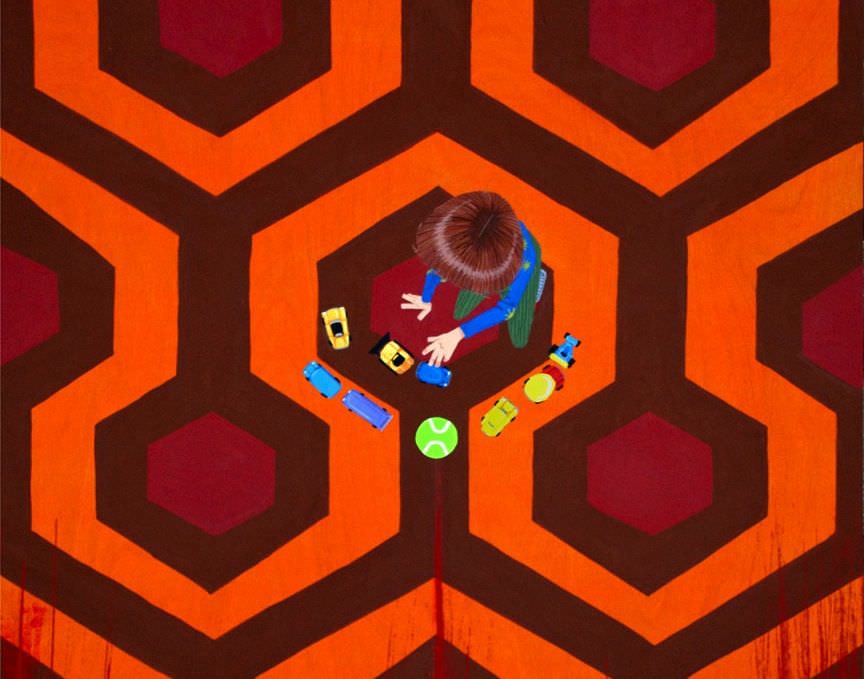 Getting Gleefully Lost in The Shining Documentary Room 237

“In all things mysterious, never explain.” – Stanley Kubrick, quoting H.P. Lovecraft in an interview with John Hofsess of the International Herald Tribune, October 26, 1980.

Stanley Kubrick’s The Shining was released in the summer of 1980 to tepid reviews but, lucky for him, boffo box office. As with all of Kubrick’s movies since 2001: A Space Odyssey in 1968, the critics were confounded by what they had seen. Kubrick’s movies post 2001 did not conform to Hollywood narrative conventions, and they seemingly did not bear much if any similarity to Kubrick’s previous movie. The Shining was preceded by Barry Lyndon, released at the end of 1975, a deliberately paced, handsomely mounted three hour picaresque narrative about the quick rise and slow fall of an 18th century rake, played superbly, with great restraint, by Ryan O’Neal.

Unfortunately Kubrick’s timing was as bad as Barry Lyndon’s luck: he spent so long in preparation and production on Barry Lyndon that it opened six months after the phenomenal critical and commercial success of that summer, Steven Spielberg’s Jaws. At the dawn of the $100 million blockbuster age, Kubrick had come up short, and his historical pageant was greeted with muted reviews and poor box office. Searching for his next project, Kubrick found in Stephen King’s novel “The Shining” the potential of a sure fire box office hit and the chance to explore the newly rejuvenated horror film genre: with The Exorcist (1973), The Texas Chainsaw Massacre (1974), Carrie (1976), Eraserhead (1977), and Halloween (1978) – both Hollywood and independent productions had pushed the genre to the breaking point in terms of extreme violence, gore, and sensational horror. It was an easy bet that Kubrick’s The Shining, with Jack Nicholson starring, was guaranteed to be both a critical and commercial success.

It made money on release, but most viewers, including many hardcore Kubrickians, were confused and confounded by another long, deliberately paced and coolly constructed narrative puzzle of a horror film. There were few cheap thrills and little of the extreme violence initiated by Kubrick’s own A Clockwork Orange (1971). With its open-ended story and lack of a firm resolution for it’s characters, The Shining seemed to raise more questions than it was able to answer. Which for Kubrick was exactly the point. Over the past 33 years since its release, the critical consensus about The Shining has gone from being thought of as coming up short to being one of the greatest horror movies of all time. And much of the reason for the critical shift comes from it being forever relevant, forever entertaining, forever mysterious, breathtaking, and horrifying, year after year. Its open-ended narrative and playful visual and aural puzzles continue to fascinate viewers of all stripes. 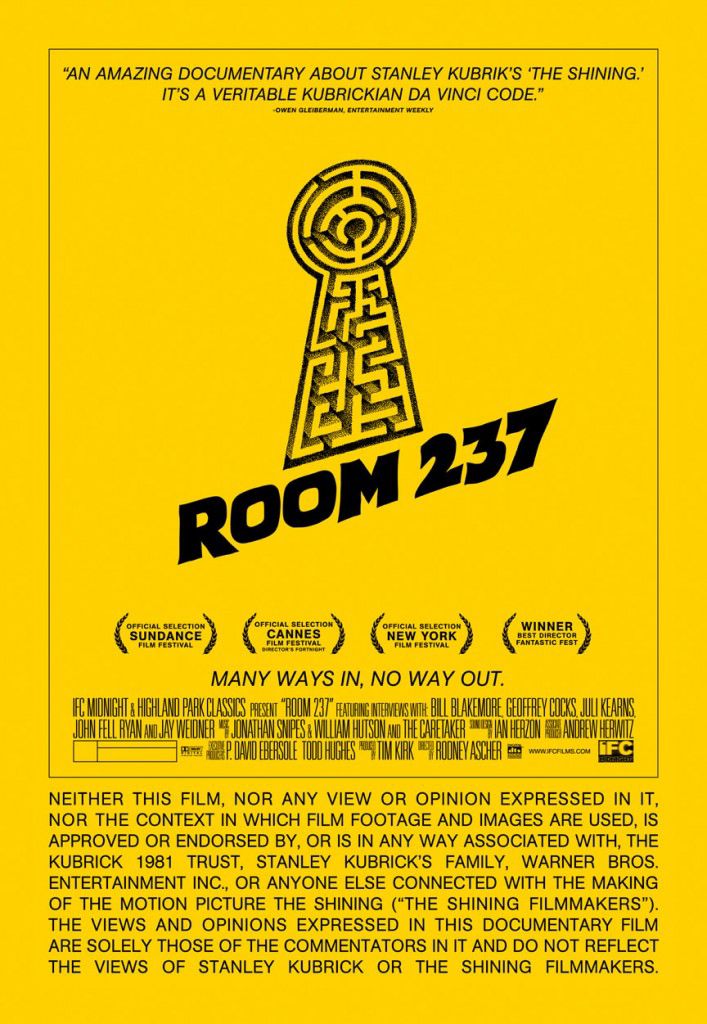 Five of the more remarkable viewers of The Shining, share their thoughts and beliefs about the movie in director’s Rodney Ascher’s documentary Room 237, premiering in theaters, and on VOD, iTunes, Amazon, and other digital platforms, on March 29. These five viewer/critics have made repeated close viewings of the movie, and they offer incredibly intriguing and entertaining textual analysis on the film’s supposed secret meanings and themes.

Bill Blakemore, ABC News reporter, expounds on evidence he’s found in the movie that reveal it to be an allegory about the genocide of Native Americans. He offers as proof the interior design of the Overlook Hotel, with it’s strong Native patterning motifs in wall hangings and floor tiling, along with mention from hotel Manager Stuart Ullman that the hotel was built on an old Indian burial ground (a detail not in King’s novel). The Calumet baking powder cans with their Indian chief logo, staring down from their pantry shelves at a crazed Jack Nicholson late in the movie, is for Blakemore further proof that Kubrick was trying to bring to consciousness in American audiences the long suppressed history of Native American genocide in the land of the free and home of the brave. However, it could be that after becoming so enamored of the Native American inspired interior designs of The Awahnee Hotel in Yosemite National Park, California, which he discovered after extensive research into existing American hotels and resorts, Kubrick not only cribbed much of it’s look for his Overlook Hotel sets, but was also inspired by the fact that the Awahnee was built on a site that was once a village for the native Miwoks. So was this a pre-planned narrative puzzle from the great director, or just a lucky break? Kubrick’s co-screenwriter Diane Johnson has admitted in interviews (including to Geoffrey Cocks in his book “The Wolf at the Door: Stanley Kubrick, History and the Holocaust”,) that Kubrick did discuss with her embedding this Native American genocide theme into the movie, so Blakemore’s hypothesis seems pretty close to fact.

Professor Geoffrey Cocks believes the film is really about the Holocaust, and uses as evidence Jack’s German made typewriter, a Triumph Adler. More intriguing, he notes several references in the movie to the number 42, which Cocks believes refers to the year 1942, when on January 20 the Nazis held their Wannsee Conference, where they began implementation of the “Final Solution to the Jewish Question.”

Finally, John Fell Ryan, a blogger at KDK12.com, has projected the movie running in reverse superimposed over the forward projected one, looking for weird symmetries in the combined images and, somewhat spookily, finding them.

Using footage from The Shining as well as other Kubrick films, but no talking heads, the viewer is immersed in a cacophony of discursive voices expounding strange, exciting ideas, much as Dave Bowman was “examined” in the white rooms by the Monolith and those strange echoey voices at the end of 2001. Ascher’s Room 237 suggests an ever-expansive view of a perennially mysterious work of art. 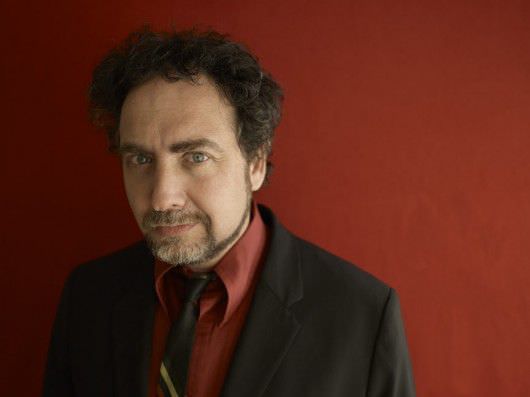