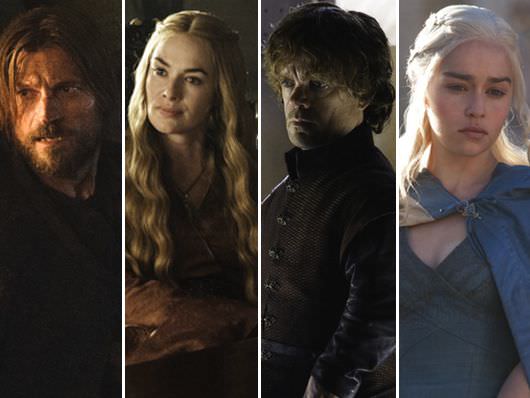 Are you a Joffrey, a Cersei, or a Jon Snow? Take our Game of Thrones Personality Quiz

Season three of Game of Thrones is finally, mercifully here. Of the many, many reasons to love GOT (dragons, palace intrigue, a Tolkien-esque commitment to mythical cartography with a Cinemax After Dark commitment to carnal relations), we've found that it’s the fantastically divergent (and huge) cast of characters that makes it endlessly enjoyable, week after week. Millions of fans would no doubt agree.These characters! They touch upon every possible point along the spectrum of human decency and depravity, often in the same person.

Cersei Lannister, loving mother or homicidal lunatic? Both. Theon Greyjoy, tragic antihero or vengeful traitor? Both. Hell, even a relatively minor character like Sandor Clegane, better known as the mutilated giant The Hound, is nuanced–the colossus is both a vicious slaughtering brute and a tender soul who saved Sansa Stark from a pack of would-be rapists and murderers.

The question we pose is who would you be if you were a member of the Game of Thrones universe? Despite most of us believing we are made of solid Stark-stuff, humble and true, mustn’t we admit we all have a little of the vain and venal Lannister in us, too? God knows we're as gloomy as Balon Greyjoy on our commute into work on Monday.

Below you will find 14 of the show’s main character’s personalities distilled and modernized. We’ve scrubbed their specifics, so you will have to contend with which GOT character you truly are, instead of just cherry-picking who think you are. From a quick office poll, we found that most of the women we spoke to claimed Daeneyrs as their GOT avatar, while the guys usually hewed to the pre-decapitated Ned Stark/Robb Stark/Tyrion Lannister troika. You will find the answers via the corresponding numbers in the slideshow. No peeking beforehand, or we'll sic The Hound you.

1) You know what never goes away? The sting from losing that first love (especially for you, a hopeless romantic), a sting that only intensifies when you see their new spouse on, say, Facebook, and they’ve got a much better job than you do. You understand such outrageous slings and arrows of misfortune better than most. But here’s the thing about you—instead of dwelling over it, you’re making a name for yourself. While many people around you seem to content to play checkers, you, my friend, prefer chess. You're not above gossip, however. In fact, you practically make a living off it. Your ambition could be categorized as ‘seething.’ You’re a small business owner with dreams of bigger things.

2) Another hopeless romantic! You are loyal, tough and kind. You’ve branched out and are no longer running with your old crew, and you exist in a kind of ever-changing self-imposed exile (that old crew grew stale, going to the same restaurants and bars over and over), and you’ve learned the customs, and gained the respect, of a new host of friends (they’re into tapas!) You’re something of a catch (even if that special someone doesn’t seem to realize it). You don’t mind pets.

3) Stylish, sophisticated, smart—and you follow your heart, no matter what others (and society) thinks of your desires. You’re fiercely intelligent, and capable of playing multiple sides at once. While you can be incredibly loyal to your family, you are not above swift, tenacious action when it comes to everyone else. And you don’t love all your friends and family equally (who does?), as you understand that morality is not black and white and thus, you have made your home in the grey. You enjoy wine.

4) Young and willful, you don’t waste your time pretending to be anything but what you are. You are dealing with a lot more than most people your age really should, and aren’t afraid to be disliked. Your relationship with your parents is complicated. You had a very, very rough go at puberty, as you were subject to an unmitigated level of scrutiny. You could stand to learn a thing or two about relationships, but who amongst us wasn’t a touch out of our depth when we started down the fretful road of courtship. You rarely do what you’re told. Admit it, your voice is annoying.

5) You take your work seriously (some in your company would argue a little too seriously). You’re currently involved with someone who’s totally different from the types of people you’re typically with, but hey, you could use a break, you’re trying new things. You do not typically seek attention, but you find yourself in a position where you are simply the best person for the job, and therefore, a little self-involved action is required. Your family bugs you.

6) You’re not afraid to ask the deep questions in life.  Like, who am I really? Why am I here? What the hell have I been doing my whole life? Yes, you’re conflicted, but who in their heart of hearts isn’t? You’re a searcher, a seeker—you are trying like hell to forge your own path in this wacky world. Your last trip home wasn't too great.

7) Skillful at the dark arts of seduction, you are of unquenchable desires and startling abilities! You have some self-control issues. Especially at work, where you did no good turn for your last boss, but, through your charm, guile and indomitable spirit, you have managed to stay on top. While popular, you feel a bit misunderstood, and have recently made friends who value substance more than style.

8) You compassionate so-and-so! No matter how hard you try to hide your trembling heart in the rough and gruff exterior you feel the world demands, the better angels of your nature sing the loudest. How you bristle when the downtrodden are further trodden down! In your still-young life you have traveled far and seen a great many disturbing things, but you learn your lessons well. There might be a bit of new romance in your life, but you worry they’re just too different. And yet, and yet…

9)  Your precocity knows no bounds. You are resourceful and clever and indefatigable. You’re of the stock that can encounter an endless series of ever more hideous trials and tribulation and only grow stronger. You make friends in both high and low places, as you’re keenly aware that loyalty and friendship, no matter the position of those offering it to you, are crucial to your success. You’ve probably had to grow up too fast. You don’t give a whit about fashion or style, which, of course, makes you fashionable and stylish in your own peculiar way.

10) Day by day, night by night, you shed a little more of the shimmering chrysalis of your long-held naiveté and become something different, something stronger. You are in the midst of a great metamorphosis! The question is; what will the end result of this metamorphosis be? A strong, capable person who has been forged in the crucible of many trials, or, a vengeful wraith, determined to make others pay? The choice is yours! (Choose vengeance.)

11) You know what you like? Fun. You have a fine sense of the absurd. You’re a giant of wit. You’ve been accused, from time to time, of not being serious enough. Ah ha! And here in lies your advantage—you are consistently overlooked and/or underestimated, and those that take these ignoble stances wind up filled with not a small amount of rue! That’s because beneath your joie de vivre and wicked sense of humor is a tactical mind. Another chess player in a world of checker enthusiasts, another romantic in a world of cold misfits, the world would do well to make way, for you’re on the make.

12) You’re persuasive. If you were in Glengarry Glen Ross, you’d definitely be Ricky Roma. You are a big believer in your own intuition, and why not, you’re a pretty tuned in person with your finger on the pulse of, well, the world. You view the universe as something sentient, invested with signs. You’re seeing somebody new, and they’re smitten with how strongly you believe in them. You’re sort of religious.

13) Look, there’s nothing wrong with being one of those people who likes to Instagram photos of their children, so long as you do it within reason.  Would anyone accuse you of having an unhealthy relationship to your kids? No, nobody would dare. Here’s something cool about you—you like to travel. And how the locals have grown smitten with you! You’ve got plans—big plans. You're shopping for a new chair.

14) Heavy is the head that wears the frown, is it not, my put-upon, perpetually gloomy bread-winner? You are the type who doesn’t shirk your duties, but rather, take more and more of them on. Perhaps these are too many duties? It would be foolish to try to talk you out of shouldering them, however, because you're a stubborn mule of a person! But you are also kind, and your great efforts in this life are not about your own glory but about doing what you feel is right. People really need to stop telling you whom to marry.

All images courtesy of HBO.