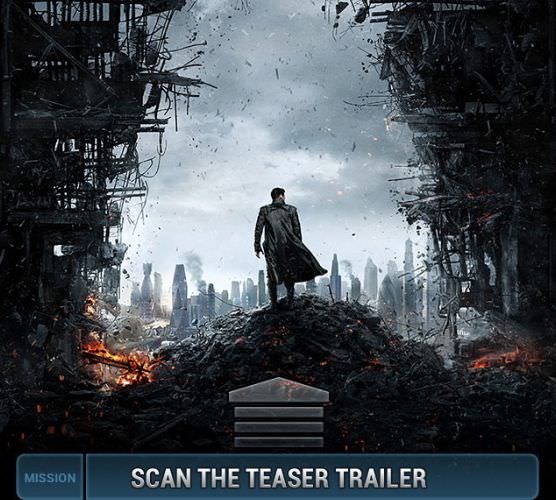 Star Trek fans who caught the Super Bowl were likely thrilled by the debut of Paramount’s new innovative smartphone app for the highly-anticipated Star Trek Into Darkness, which opens May 17th, with advance screenings in IMAX for the app's users on May 15th. It’s the official spot for Trekkie fans to gain exclusive access to content, info, and giveaways related to J.J. Abrams’ upcoming action thriller.

Offering a high-tech app alongside any franchise in the sci-fi realm is a no-brainer, but Paramount and Qualcomm (the developer behind the the portion of the app) have truly upped the futuristic factor in their latest endeavor. The result is a first-of-its-kind, ever changing real-life gaming experience for devoted Star Trek fans and new audiences alike.

The augmented-reality minded app is powered by a platform that industry insiders and techies call a “Contextual Awareness” SDK [Software Development Kit.] Director of Product at Qualcomm Labs, Ian Heidt, explains, “What that means is that because your phone is always with you and has a number of sensors on it that can understand your environment, the phone can help adapt its own content to where you are in the real world.”

Enter Paramount, who—leading up to the release of Star Trek Into Darkness—were looking to create an app with a future as infinite as the Star Trek brand, rather than a fleeting marketing campaign. “We got started with them as they were thinking about new and interesting ways they could engage with the loyal community surrounding Star Trek and promote the upcoming movie that’s going to launch in May,” said Heidt. “This is a good fit because in that fictional universe, they have things like the tricorder, a handheld device that can understand and diagnose what’s going on in the environment.” It’s no shocker to learn at least one of the developers working on the app is a self-ascribed Trekkie.

Simplicity was key in development of the app—and using it is largely intuitive. The homepage has a scroll bar of icons. Clicking on an icon will give you a mission to complete.

An “Image” icon will send you out to find the newest Star Trek Into Darkness billboard in your town. When you find it, hold your phone up to the ad and the device will recognize it from a variety of  distances or angles. It lets you know you’ve completed the mission and unlocks a new trailer or TV Spot, many of which will be exclusive only to app users. The “Sound” missions are similar but revolve around seeing a trailer or commercial for the movie. Activate it and your device will hear that you’re watching the ad and unlock more goodies. Each time a mission is completed the icon disappears and a new one pops-up and you move up in rank within the Starfleet, starting as a New Recruit. The first big event for app users came during this year's Super Bowl. Users were able to activate sound recognition as the new Star Trek Into Darkness commercial premiered during the big game, earning their first Starfleet points and special content.

The sort of prizes fans can expect in return for completing missions are hardly relegated to mere trailers or press images (which also function as wallpaper in your smartphone.) Users can enter monthly sweepstakes. The loot for these drawings haven’t been finalized quite yet but could include high-end memorabilia such as costumes from the film. Smaller goodies include articles and expanded trailers only available to app users. Paramount said they wanted this app to be the premiere place for Trekkies and Abrams fans to get all their Star Trek Into Darkness content, and it seems they’ve certainly succeeded.

Paramount worked hard to make sure this was applicable to everyone, anywhere. If you look at similar augmented reality games, a lot of them were focused on key locations in big cities. This one boldly goes where no app has gone before, utilizing places anyone has in their home town, a movie theater, a library. It all comes back to reaching fans across the US and Canada, not just major markets.

The scavenger hunt aspect to the app also finds a perfect balance between appealing to both casual users and hardcore devotees. While most of the missions revolve around major ads and commercials, there are some other Trekkie-centric easter eggs too. Say the app sends you to your local movie theater to scan the latest poster. Look around a little harder and you may find other hidden images, like a Delta Shield (those golden triangle badges Spock and Sulu wear.)

What makes Qualcomm’s technology different from previous apps is its ability to take all the data from what you’ve done and automatically tailor your experience. At the same time, it’s giving Paramount the feedback they need to continually update the app with new missions. Without getting too deep into tech speak, context awareness technology inside the app is able to actually analyze the posters and TV spots that Paramount is putting out and quite literally recognize them for what they are, rather than having each piece of content hard baked into the app when you download it. This way the game is dynamically updated as users play it. Instead of just giving you more commercials and movie clips, it’s listening and adapting to you.

The app is currently available from the iTunes App store, and Google’s Play Store. When asked if Paramount showed Qualcomm anything new about its own products, Heidt had this to say, “You should not try to create technology for technology’s sake. The platforms we produce don’t come to life without someone like Paramount to bring color to them. They saw a potential to give what we do that special ‘Wow-Factor.’” No word yet on if Paramount will be adding teleportation beams. As of press-time Capt. James T. Kirk could not be reached for comment.

TAGSParamount Star Trek Into the Darkness