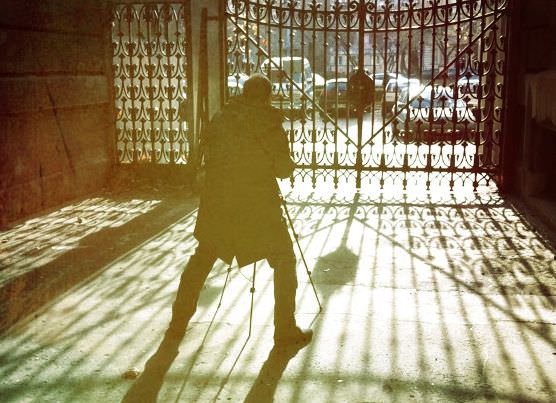 He Builds It, Audiences Come: A Q&A With A Good Day to Die Hard Production Designer Daniel Dorrance

Production designer Daniel Dorrance’s career has been something of a monster movie carnival. That’s not to say he’s worked exclusively on movies about monsters, but rather almost exclusively on giant, sprawling epics. He’s been responsible for the creation of massive sets and managing huge departments while answering to some of the heaviest of heavy weight directors. Those directors include Steven Spielberg (Hook, Saving Private Ryan), Francis Ford Coppola (Dracula), John Woo (Mission: Impossible II), Joss Whedon (Serenity), J.J. Abrams (Mission: Impossible III) and Michael Mann (Collateral).

His latest monster movie effort can be seen in this week’s release of A Good Day to Die Hard, the fifth installment of the trials and tribulations of the indestructible New York City cop, John McClane, played, of course, by Bruce Willis, a role he first inhabited 25-years ago. In this iteration, McClane travels to Russia to help free his estranged son, Jack (Jai Courtney), out of prison. But, this being John McClane, he’s immediately caught in the middle of a terrorist plot.

We spoke to Dorrance, production designer extraordinaire, about finding the perfect jail cell (in a church) for the film's nastiest bad guy, using a Los Angeles gang to help dress a set, and why sometimes, you just have to buy a Ukrainian helicopter for your film. 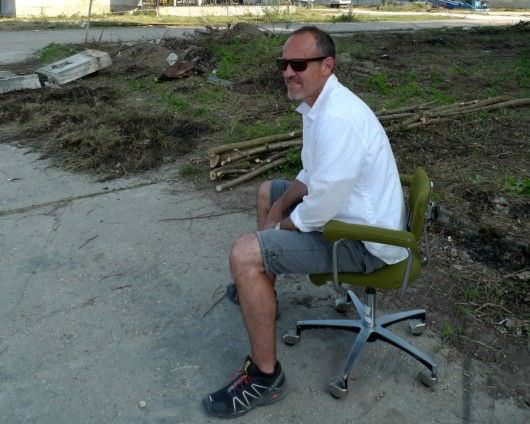 The Credits: So A Good Day to Die Hard is set in Moscow, how was it prepping and shooting such a huge film abroad?

Dorrance: Well we had to decide what we were going to call Moscow, because we weren’t going to shoot Moscow for Moscow, so we had to pick from the best tax incentive countries, and those were Budapest, Belgrade, and Prague.

How’d you pull it off?

We went to Moscow first to get to know what it’s all about. At that time we were hoping to shoot two to three weeks there, to get those establishing shots that would help sell Moscow. In total, we had a twenty-day scout trip, with three days in Moscow to get a gist of the city. From there we went on to Prague and scouted there. We looked at a few interiors and got a good sense of what they had to offer, and then were on to Budapest. In each town we met a representative who acted as our local scout. Our last city was Belgrade, and having done all that, we chose Budapest as our main city that we were going to portray as Moscow.

What do you do when you decide you’re going to turn one major city into another?

In Budapest we started figuring out what kind of roads are we going to use for the chase, and we tried to find interesting pieces to implement into the chase, different tunnels, roads changing direction, interesting facades, etcetera. We scouted this location that was an old soviet airbase outside of Budapest. It was real, which was fantastic, and that’s where we built the whole exterior of the bank [there's a huge action set piece that takes place in a bank]. We laid all the concrete of the main square, put in reflecting ponds, sculpture pieces, a portion of the interior—it was a pretty elaborate build. Also, we had a helicopter involved in the bank sequence, so we had to buy one. 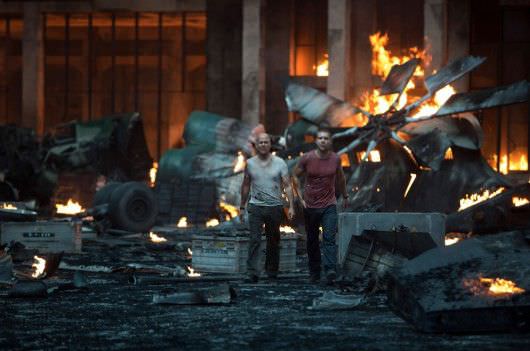 How much did the helicopter cost? And where did you find it?

It cost $360,000, and we found it in the Ukraine and had shipped down in trucks. We rented a flyer to do exterior stuff with it, then when we shot the interior. We were in dealings with the helicopter for months, and it got to a point where it was too late to build it, and we were two weeks from shooting and still didn’t have it. Finally it came, and it was a disaster because we needed time to prep it, but we pulled it off.

What about that amazing place the main bad guy, Komorov, is being held?

Set I had a lot of fun with this because we wanted Sebastian (Sebastian Koch, who plays Komorov) in an area of this prison that’s now sort of defunct, because they want him away from the general population, they want to isolate him. So I found this old Roman ruin in Budapest, a cathedral, and we put his cell in there. So he’s in this little cage in the middle, like a rat, and it’s just beautiful. And I had just stumbled upon it during general scouting…sometimes you have the happy accident like that and you sort of pitch it to the director.

Let’s move back in time in your career. Tell us about your second film, working on Steven Spielberg’s Peter Pan-inspired Hook.

Hook was one of those kind of shoots where we had two designers, one from the theater world, John Napier, another, Norman Garwood, was the film person, and both these guys were designing these sets at the same time. And the sets were huge, filling stages all the way to the rafters. Steven [Spielberg] wanted everything to be covered, so we built Hook’s ship, the wharf, the boats…all in model form, ¼ inch scale, with John Napier building these elaborate models to show Steven and the crew. It was such a surreal pirate land, and it was all done on stage, we didn’t shoot anything in the outside world, so for me it was all about learning stagecraft.

What was it going from Steven Spielberg to working with Francis Ford Coppola for your next film, Dracula?

Coppola was…a little less business-like than Steven. With Steven, he’d take a meeting, answer the questions, and move on, there wasn’t a lot of time with him. Coppola was a little more flexible in how he approaches prep; you can spitball with him. We had Francis’s son, Roman, who was the second unit director, and he was really trying to do a film with old school effects, trying to utilize in-camera effects, the old school way, not counting on CGI. For instance, when Gary Oldman (Dracula) was crawling on the outside of his castle, that wasn’t CGI, it was actually an inverted shot. We built the castle wall upside down and at an angle, so the angle had to be just right where he wouldn’t fall or slide, but also that he didn’t have strings attached, which gave it that creepy, surreal look. We built a lot of stuff upside down so things would hang differently. Roman was fresh out of film school and wanted to do all these things, and Francis was all for it.

Tell me about working with Spielberg again on Saving Private Ryan, specifically creating that town in the final, epic showdown between Captain Miller’s (Tom Hanks) unit and the Germans.

The last town (super old spoiler alert; where they actually Save Private Ryan) had to be built, which was a twenty-week build. Steven hadn’t seen it two weeks before shooting, which was very scary. And we started to break down the geography of how the scenes were going to be shot, and how the Germans were going to come in, and all of it was done with a military advisor, so we asked, “if you had this town, how would the Germans attack it, and how would you defend it?” We had the script, but now that we had the actual site built, they came in and re-wrote the scenes to fit the location.

What went into producing those first 22-minutes when the Americans storm the beach?

The beach landing was the first thing we shot in the movie, and it was a four-week shoot, with twelve real landing craft that we bought in Palm Springs. They were being stored there, so we had them shipped over, we redid the motors, repainted them, and they were all sea-worthy after that, they really worked. When you pull back and see the ocean after they take the beach and see all those ships there? That was one of the very few CGI shots in the film.

You worked with Michael Mann on Collateral in 2004, which was such a visually stunning film.

Michael Mann is very visual, very involved in the set design process, he’s like another level of being very particular about each piece that’s shown, from set dressing to pieces on the desk to the overall color palette. We had a lot of meetings with him about what the overall color palette of the film was going to be. We shot a lot of nights in that film, and it was shot digitally [often reported as the first feature length film made by a studio to be shot digitally], so you could actually shoot available light, you could use street lights, you kind of got that sodium vapor yellowness that added to the look of the film, and that was his plan over all. [Famously, the digital camera allowed Mann and crew to keep in a shot of coyotes running across the street, an unplanned, but poetically apt, moment in the film.]

What part of the art design of that film stands out in your memory?

Michael would see these murals, you know, tag art, on the street and he’d want to duplicate them…but you can’t duplicate them because, technically, it’s art. So we had people out looking for taggers trying to get them to sign off on their murals, and the one he wanted most was a Mexican mural, and we ended up finding the main guy who painted it, and he was in prison. He had to sign off on it. And then we actually talked to the 19th street gang, near downtown, for the opening scene of the film. That area where we shot was 19th street gang territory, and somehow Michael knew how to get in touch with these people, and he had the gang come in and tag the whole place that night. That’s the kind of stuff that was going on.

Amazing. So, what are some things every production designer needs to know?

You have to learning drafting and proportion. Not on a computer, hand drawn. You really have to have a sense of proportion and how to use it and how to do the simplest of layouts. And you have to get along with people. A lot of people still don’t seem to get that. You form so many relationships during a film, and it just makes everything that much easier when people want to work with you. And, be prepared for long hours and being away from home.

Featured image: Daniel Dorrance on a location scout in Europe for 'A Good Day to Die Hard.'