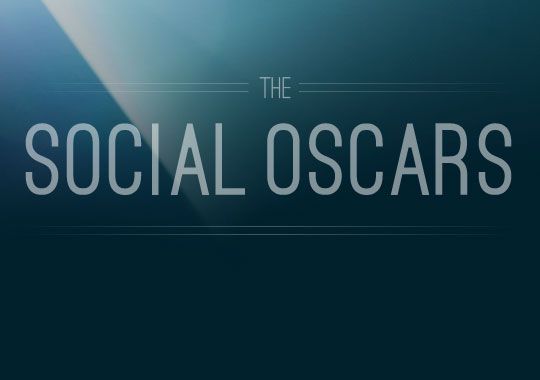 Can We Predict The Oscars? Social Media Reveals Who The Public’s Rooting For 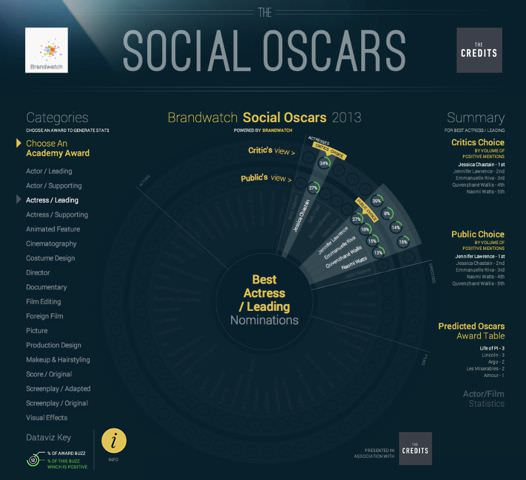 They are known as quants (short for ‘quantitative analyst), and their undisputed supreme leader, at least in the public’s perception, is Nate Silver. You’ve heard of Silver, the man who went from relative obscurity before the 2008 presidential election to a household name thanks to his pinpoint accuracy predicting the last two presidential elections.

Quants are not just employed to help us figure out who the next Commander in Chief is going to be, of course. There are other races that capture the public’s interest and imagination—namely, the Oscar race.

So we teamed up with global social analytics and monitoring company Brandwatch, which created a one-of-a-kind Oscars predictive Data Visualization. Our quant’s name is Edward Crook, a cheery man who loves film, lives in England, and created the methodology for this interactive tool that, in his words, “is the best of its kind on the web, allowing users to see which films have critics backing and which are public favorites.” Crook helped create an algorithm that helps sort out the Oscars madness by disregarding overall 'buzz' and instead focusing on top choice nominees and the positive mentions they generate. The DataVis, in effect, locates the signal through the noise.

The DataVis never rests, and its complex algorithm monitors all mentions of this year’s Academy Awards (and has been doing so since late last year) in the news and across social channels to decipher not only who’s receiving the most ‘buzz’ in their category, but also who’s achieved the most positive chatter for their work from the public and critics alike.

“Critics are authors considered to have authority, considerable influence, or explicit professional knowledge, and frequently wrote (or were quoted in) news articles, reviews and influential blogs,” Crook explains. “Public mentions are mostly found on Twitter, Facebook and forum threads.” (The latest statistics reveal that the DataViz is currently powered by 121,000 tweets and 304,550 online mentions, total and growing every day.)

Do not be fooled by the phrase ‘buzz,’ however, a mere mention of Anne Hathaway won’t do it, she must be mentioned in correlation with Les Misérables, and that mention must be positive for it to rate on the DataVis.

“The critic's and public rankings are not concerned with overall buzz,” Crook says. “Rather, 'top choice' nominees are those who receive the most positivity (winning-related mentions). It is possible for an actress to be mentioned many times online, but only anecdotally in relation to the Oscars. For example: 'Academy-Award nominated actress Anne Hathaway wore a Dolce & Gabbana dress with Jimmy Choo heels,” Crook says. “Similarly, it's possible for a nominee to receive a high percentage of positivity but out of a low level of buzz—for example, Sally Field might generate only five mentions in a day, but all of these are positive. The important feature of our method is that we measure the volume of positive predictions. This both echoes the nature of the voting system, and, counters the examples above that might otherwise skew the data.”

How is the above different from the way many Oscars predictors work? “Most analyses to date have been flawed. In basic coverage, analysts merely count the number of times a nominee's name appears online and declare the most prominent rival the predicted winner. What we have crafted here is a means of accurately contrasting the views of the average viewer with those of authoritative voices.”

We’ll let you (and ultimately, the outcome of the Oscars) decide whether the DataViz has revolutionized the field of Oscar predictive analytics the way Nate Silver’s FiveThirtyEight blog did for election prediction. Of course, the one major difference between predicting a presidential election and the Oscars is, for the former, Silver gets data straight from the people who ultimately make the decision; the voters. For Oscar predictions, however, we can take the most accurate reading of the film world’s temperature, but in the end it’s whether or not the 6,000 + Academy voters themselves are swayed by the critical and public perception of a film’s chances. Considering they’re human, we’re willing to bet on our DataVis.

And in case you’re wondering, our quant Crook (okay, his name would be perfect for a film about a nefarious quantitative analyst), very non-objectively and non-quantatively prefers Life of Pi as his favorite film of the year.