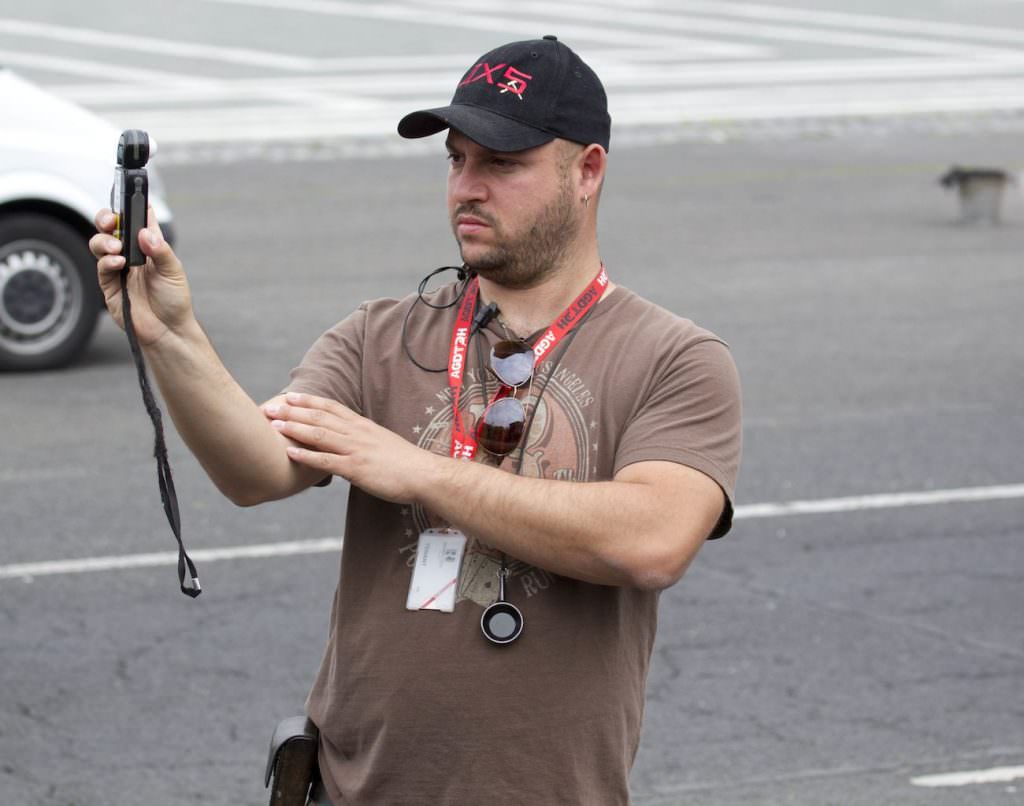 At the ripe old age of 34, Jonathan Sela has turned his childhood passion of shooting films in Israel into a big time Hollywood career. As the cinematographer on A Good Day to Die Hard, Sela was reunited with director John Moore (they worked on The Omen and Max Payne together) to film the fifth installment of an action franchise that has spanned 25-years and grossed over a billion dollars worldwide.

Sela was interested in looking at the travails of John McClane with fresh eyes, and thanks to a script that had the grizzled New York cop traveling far out of his comfort zone to Moscow to rescue his estranged son, Jack (Jai Courtney), Sela found there was a lot of room to invest the latest Die Hard with a brand new look and feel.

So we spoke with the young cinematographer about finding a rhythm with your director, how he framed this massive action film on an intimate scale, and his (mixed) feelings about shooting in digital versus film.

The Credits: The production of A Good Day to Die Hard spanned multiple countries and many months. Can you tell us about some of the challenges of shooting this film?

Sela: There were a lot of different sides to the challenge. Making a new Die Hard from a story point of view was a challenge because you have something that’s been around for many years and you must bring something new to the table. You know the generation has changed, people will watch this with different eyes and expect different things, so our challenge was to create something new but be true to the story, true to who John McClane is. The fact that he’s in Moscow, a place his character has never been before, opened up a whole new page of rules you can break. You’re not in his playground, you’re in a whole new territory, so for me it was visually opened up so much, and my challenge was to try and create a whole different tone and color and look.

What were some of the visual challenges you faced?

From a visual and technical point of view, being in three different countries, with the majority in Budapest, while filming some in London, some in Moscow, set up a certain amount of challenges in making sure things match. We’re opening up a door in London, entering a room in Budapest, and looking out a window in Moscow. And the ending of the movie is epic and required a lot of different set pieces: interiors, exteriors, smaller pieces, twelve different sets to make one set live together. Breaking down every single shot, making sure you have every single element–it's a lot of work. And the big challenge is to make sure that everything comes together in the end. 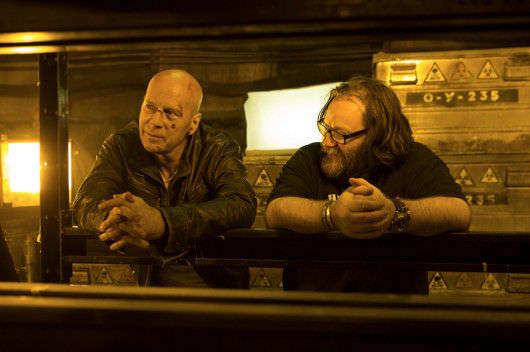 What kind of look was director John Moore going for?

I like a director who has a vision or an idea, and my job is to make it real. When John and I met, he had very little to say, his main thing was that he wanted to show a Moscow sick with corruption, and so the question was how to play with colors to make you feel that. Most of these European city’s have such beautiful architecture, so we needed to figure out how do you take that and not make it look so perfect, so clean? I mixed a lot of colors; greens, blues, yellows, oranges, making sure nothing is ever quite perfect, which I think works really well. Otherwise, everything looks too polished and too perfect and too Hollywood.

How did you use the camera to get inside what John McClane is feeling?

With our camera we wanted to feel that John McClane is out of his comfort zone. This is the first time he takes the initiative to go somewhere else to solve a problem instead of the problem finding him. He’s the one who is taking steps to try and figure out what’s going on, and that led us to create an environment that he doesn’t feel comfortable in. He doesn’t speak the language and he constantly feels he doesn’t belong there. He’s such a small person in the scheme of things. We did that with the camera work, you constantly want to be with him and let him walk you through his story. It’s a journey, it’s one day in his life of being in Moscow, and the camera is always very loose, there’s a lot of handheld work. On every take we did something different for the purpose of not having a perfect structure, a perfect composition. You really feel the sense that you’re in a foreign city. Wed did very few of the epic establishing shots, very few big crane moves…they exist but they’re hidden. McClane’s right there in the middle of this space, and we’re constantly emphasizing how small he is—he’s not here to save the day, he’s here for a family matter.

You and John Moore worked together on The Omen and Max Payne, what did you take from those experiences to inform your work here?

Those three movies are very different from each other, there’s nothing consistent visually, but the more you work with one person the easier it gets, the more freedom you feel, and the more sense of comfort you have. What I always strive for with a director is that I’m really there to take their vision and make it happen, the more we communicate the easier it gets for both of us. I kind of know what they like, what they don’t, what their comfort zone is, when to challenge them more, when to challenge them less, and you learn their behavior.  I’ve spent four hundred days or so with John. 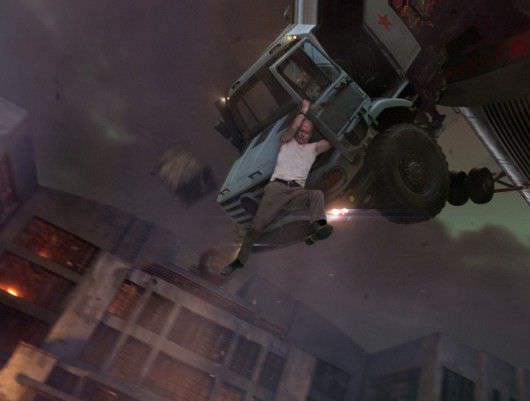 So the question that every cinematographer (and director) gets asked these days…do you prefer digital or film?

I used to say film, now I would say…neither, it’s whatever’s more appropriate for the story. I always try to look at anything technical as a tool. When I got the script [for A Good Day to Die Hard], I thought it might be a good opportunity for digital, but as soon as we talked about the quality, energy, and the way we wanted to work, it actually would have been more cumbersome to go digital.

We used film for this because of two elements—the first is the look we really wanted was something that has grain and texture, and that would be hard with digital. I don’t think the mix of colors, highlights, and lowlights would be as effective. Second, we really wanted to shoot hand held and be very lose and very organic, and on digital you always need cables and monitors, while with film the director can be right there. And John likes to be right there, he looks at two tiny black and white monitors, which is a very old-fashioned filmmaking style. He’s focused on the actor, and it’s my responsibility to make sure the images are exposed right and captured right; otherwise I’m focusing on ten different things at once. With film we know exactly what it looks like, and I can focus on the scene and the actor. Having multiple digital cameras with so many monitors that I have to watch separately and match means I have to do so much more technical work rather than focus on the art the way I want.

Sounds like you’re actually solidly in the film camp.

With digital, when you have control it’s fantastic. If you’re doing low light levels or night work, it’s fantastic. We were just doing a lot of day exteriors and we wanted gray, and in the last third of the film there’s a lot fire, and I don’t think fire holds as well in digital as it does in film. The range of colors and highlights…fire just doesn’t look as good on digital as it does on film. 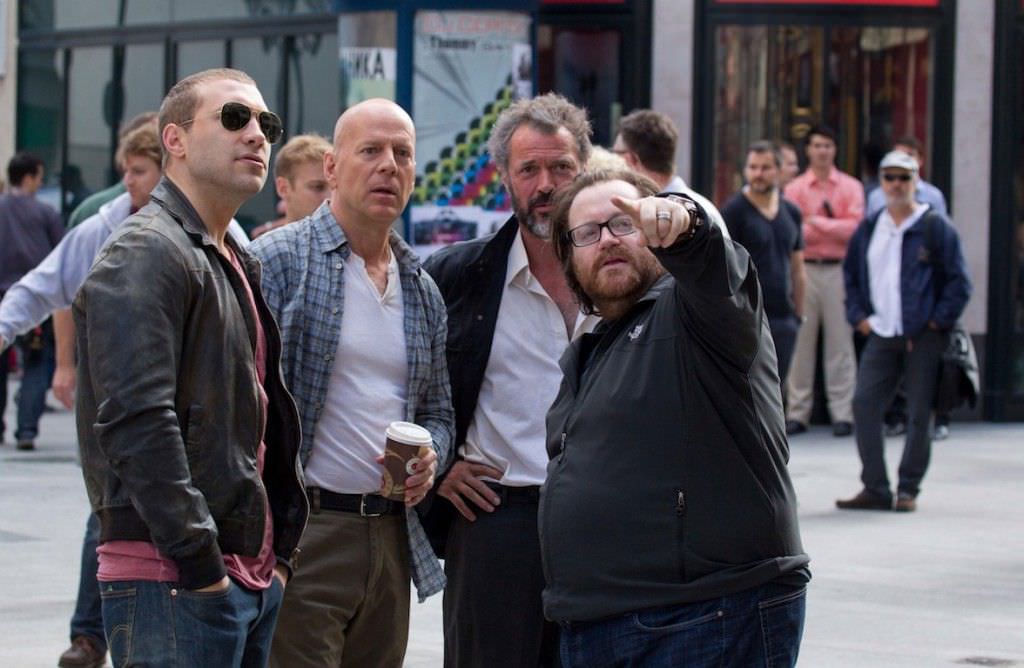 You’re pretty young for a cinematographer, can you tell us how you got into the role?  Is this something you always wanted to do?

I started really, really early, and I’ve never worked anywhere else but in movies. Well, I worked in a restaurant for two months as a bus boy, but my whole life has been on movie, commercial, and TV sets. I’ve always loved filmmaking, since I was a really young kid. I grew up in Israel and I went to a high school where we learned about films and we wrote scripts and shot shorts, so by the time I finished high school I was very intensely in the industry and working and knew that being a cinematographer is what I feel the most comfortable with.

Who amongst your cinematographer peers do you admire?

From my generation: Jo Willems, the cinematographer on the latest Hunger Games, and Masanobu Takayanagi, who shot Silver Linings Playbook and The Grey. I’ve always been a huge fan of Roger Deakins (nominated for an Oscar for Skyfall this year), who’s still amazing, and Emmanuel Lubezki (Tree of Life, Children of Men, Y Tu Mama Tambien) and Rodrigo Prieto (Argo, Brokeback Mountain).