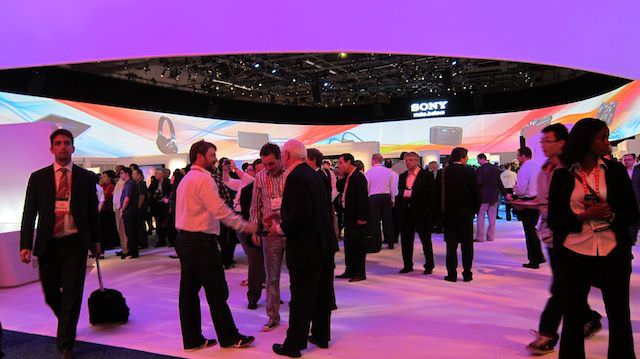 Last week, The Credits attended the 2013 Consumer Electronics Show to check out the newest, cutting-edge technology and  innovation happening in the world of film and television. Voyaging to the Las Vegas Convention Center for CES is a bit of a spiritual pilgrimage for tech fans and gadget devotees, so expectations were reasonably high that we'd see futuristic high-tech finds. Well, 2013 CES certainly delivered–surpassing our paltry little hopes.

We saw things that could have been plucked straight from George Lucas's wildest dreams: A 'smart' refrigerator that suggests recipes based upon its contents, programmable Lego robots, and cars that would make James Bond jealous. Above all, we were thrilled to find that some of the best gadgets at CES this year belonged to the real world of film and television.

Whether it was vision-controlled televisions, cutting-edge home theater surround sound systems, virtual reality stations, the unbelievably clear resolution of 4K screens in sundry sizes, gigantic Ultra-HD TVs, or a wired television that allows you to order a pizza with the click of a remote–this much was clear: CES is the next best thing to waking up in an intensely cool gadget-addled sci-fi epic.

The list goes on. Glasses-less 3D televisions. A 110" 4K LED television (the biggest, mind you, on record). A commercial-free DVR player. And just when you thought it couldn't get any more surreal, Danny DeVito shows up to screen clips from the new Blu-Ray release of his film Hoffa.

We put together a slideshow of some of our favorite film and television finds at 2013 CES. You'll find unbelievably thin TV displays, enormous screens, and out-of-this-world picture clarity. Yes, you'll also find Danny DeVito. Here are a few of our favorite things straight from the convention room floor: