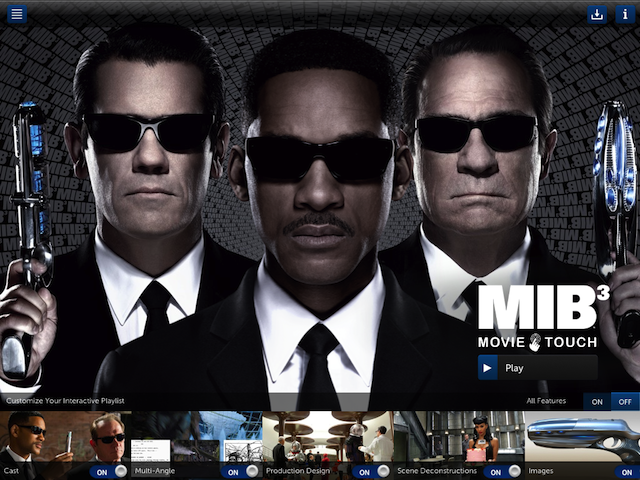 In November, two of Sony Pictures' tent-pole home video releases were Men In Black III (2012) and Total Recall (2012). For tablet users, the home release of these blockbusters were enhanced with an innovative new iPad app called Movie Touch. It’s available as a free download from The App Store and once installed, iPad owners get a score of options to optimize their personal viewing experience. The app offers a free 10 minute preview of MIB III or Total Recall; gives you a way to sign into your Sony Pictures account, which is linked to your Ultraviolet collection; and if you have either of the movies stored in your cloud, it unlocks the feature for you from wherever your device might be. The result? Viewers get an unparalleled and multi-faceted film watching experience, by way of embedded trivia and information that's made accessible as the film unfolds.

When a user watches a movie with the Movie Touch App, a scrolling bar appears on the bottom of the screen. As the movie progresses, new icons pop up along the bar with different categories such as Fun Fact, Images, Videos, Music, 360 Turnaround, Clip & Share and more. This is a fully integrated, interactive way to view special features synched to the movie itself.

Rich Berger of Sony Pictures’ Global Digital Strategy and Operations helped develop the app. When asked about its genesis he explains, “With DVD and Blu-Ray, we have been bringing the consumer lots of added interactive features. So now we’re asking, ‘how do we take advantage of what’s natively digital?’ Menus make sense for a ten-foot experience, but it’s a much more intimate experience when you’re watching on a tablet.”

An intimate experience seems to be at the heart of Movie Touch. The iPad app offers a content manager, which grants users full control of the special features that can accompany each viewing. Users can choose from categories such as Cast & Crew, Trivia, Design, Score, Stills, Angle Viewer, and Anecdotes among others—and toggle any of them on or off to customize which special features or “pods” will pop up on the Movie Touch Timeline. Berger explains, “You can say, ‘I’m really interested in the Multi-Angle and the production design, but the rest I’m not as into.’ You can turn all the other stuff off so only the things you’re interested in get surfaced on your interactive timeline. It’s something you can really personalize.” 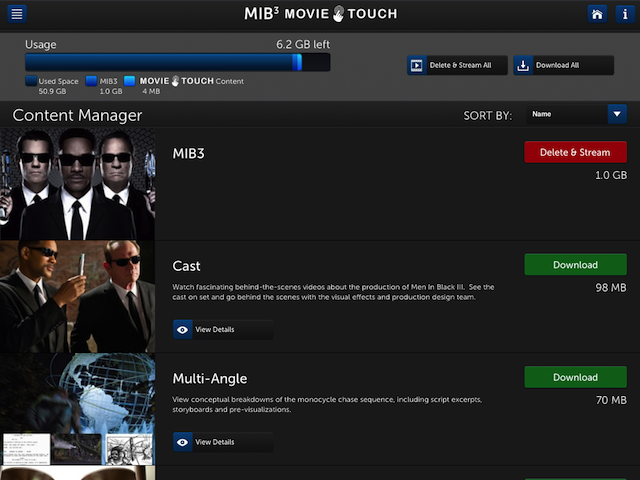 For viewers who love to share, the Clip & Share function allows users to highlight any part of the movie and post the clip instantly on Facebook. When the Clip & Share pod appears just tap it, hit the green start tab and the movie resumes. Hit stop and the clip is made. The excerpt will automatically appear on your Facebook profile, for your social network contacts to enjoy. It allows viewers to transcend traditional viewing boundaries and share their favorite parts of movies with their social networks directly from their iPads. 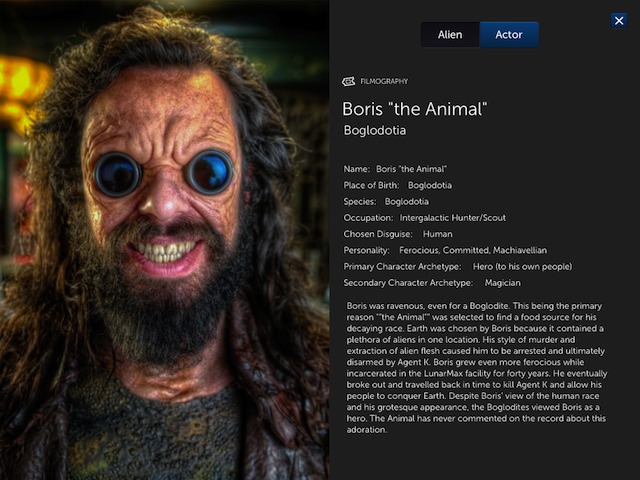 A major highlight of Movie Touch lies in the app's ability to provide a more comprehensive film viewing experience. For instance: if you’re watching a scene and you see an actor or actress who looks familiar but you can’t quite place the face, users can tap on the person in question and be presented with a full filmography pop up. “That’s more of a discovery thing,” says Berger, “If you touch someone’s face, you learn you can do that with all the different actors and characters. It’s very intuitive.” It's also an excellent way to deepen your knowledge about film. Viewers can now see behind the scenes footage in the middle of a movie, check out storyboards, and view special effects from all angles. Once a research-intensive task for die-hard film fans, obscure facts and movie trivia become an integral part of the viewing experience. 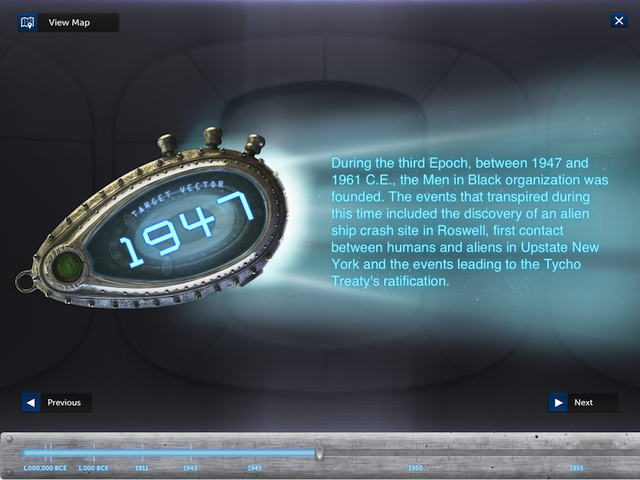 In this way, Movie Touch is likely to resonate with both the film-buff and tech-savvy demographics—two groups overlapping more and more in the digital era. While the sheer novelty of being able to tap an actor or character at any point in the film to access additional info is enough of a hook in itself, the app also answers the growing urge to seek outside resources while watching a film. The movie buff’s need to open his or her laptop or switch applications to a browser while watching a movie—say, to look up an actress on IMDB, check the filming locations, or verify a screenwriter—is no more. A viewer can now focus on the movie and have all that trivia integrated for a truly seamless experience. And whenever you'd rather focus solely on the story, you can easily turn off the special features and continue the movie without it.

At its core, Movie Touch is about options. If a viewer is home and has an available WiFi signal, he or she is able to watch the movie streaming and save space on their tablet. If you’re on the go, just download the film from your Ultraviolet collection. A built-in usage bar on the Content Manager page will tell you how much space is left on the device and how much of it Movie Touch is using. “It’s not one versus the other, it’s in addition to,” Berger says. “We still have the great experience of seeing movies in theaters. When you shift focus to the home, we still have the big screen in the living room, but you’re not seeing these types of [interactive] experiences on those devices either. It’s still more of a lean-back experience.”

With this in mind, Sony aims to optimize a unique experience for a digital, mobile world. “It’s not a zero-sum game in which we view it as the end of traditional viewing. Not at all,” Berger says. “We’re seeing better screens, 4K, Hi-Definition. That’s going to continue. At the same time, people are on the go, and people have tablets and phones. We want to give them the best experience for whatever device they’re on.” And in providing users with an impressive resource of film facts, information, and special features to enhance the tablet movie-watching experience, Movie Touch eradicates mid-film viewing distractions like who that familiar character actor is, or where that scene was shot, so that we can focus on our favorite films with peace of mind–and without pressing pause.

For more information about Movie Touch, be sure to check out the enhanced Men in Black III and Total Recall, both available in the App Store. And for more on how the app works, check out this video:

**Images: Screenshots of the Movie Touch App for Men In Black III, courtesy of Sony Pictures.