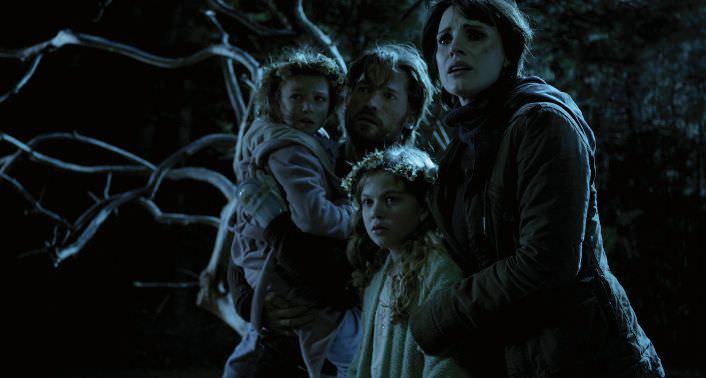 A father kills his wife and brings his two young daughters to a secluded cabin where his would-be murder/suicide attempt is foiled by one very maternal ghost. Years later, the girls are discovered, their feral upbringing posing the second biggest obstacle to a normal life behind a spirit that, to put it mildly, has become a bit possessive.

Mama may not be the feel-good hit of the new movie year, but it may be its most pleasant surprise, already taking in more than $50 million worldwide—better than three times its budget—while making Andy Muschietti a director to watch. But Muschietti, who also co-wrote the script, was blessed with more than a green light from executive producer Guillermo del Toro. He also owes much of his success to visual effects supervisor Aaron Weintraub and Javier Botet, the French contortionist who brought Mama to (after)life.

Take Andy Serkis, stretch him to seven feet tall and give him flexibility straight out of Cirque de Soleil and you have the actor who plays Mama’s titular character. “He’s very frail and can get his body into all these weird positions,” says Weintraub of Botet, and it is those contortions that serve as a physical manifestation of Mama’s tortured past, as well as the present-day horrors she’ll visit upon anyone who gets close to the “daughters” she’s adopted.

Whether he was shot in front of a blue screen (the cabin where the girls are found) or in an actual environment (the suburban home where they are taken in by their uncle and his girlfriend), the process remained the same. The giant Botet would be put into Mama’s dress, covered in prosthetics and some motion-caption garb, and hung from a wire rig (Mama does like to levitate, after all) while monofilament tied to his limbs was tugged at random times to give his character her trademark jerky movements.

“Every once in a while Andy would shout, ‘Yank him!’” remembers Weintraub. “Javier’s arms would jut in these really strange, unnatural ways that look amazing.” From there, all it took was some mixing at Weintraub’s digital effects studio, Mr. X Inc. in Toronto. “We’d take that and speed it up or run it backwards or mix in bits from other takes to get this really unique performance.”

Even for CG-heavy shots—like a crablike Mama walking up a wall and bending over backwards to reverse course and make a beeline at star Jessica Chastain—Weintraub and his team relied on Botet’s performance, shooting his upper and lower bodies separately and stitching together a composite image to make Mama’s ghostly spine bend at a right angle.

Creating a digital Frankenstein monster made up of two different shots sounds hard enough, but Weintraub points to one surprising effect as his most challenging to render realistically: hair. “Creating computer-generated hair is one of those Holy Grail things in terms of computer graphics,” he says. “It’s a real-world, fluid simulation, and we needed to create a system that was robust enough to do what Andy wanted to do with each shot.”

Specifically, Muschietti wanted Mama’s hair to look like it was floating underwater, a characteristic related (mild spoiler alert) to the character’s death a century earlier. To do it, Weintraub placed a skullcap with tracking markers on Botet, then digitally covered it with hairs perpendicular to Mama’s head in what he describes as “a giant afro ball.”

Then it would be time for a simulation using proprietary software to make the computer follow the laws of physics (think wind and gravity) as well as forces that simulated water currents. (Muschietti would get so specific as to request a tendril cover Mama’s face in a specific frame.) “You let it cook and see what you come up with,” Weintraub explains. Sometime the first attempt was spot on; other times an endless list of variables would have to be tweaked in a system of trial and error that, while time consuming, pays off with some of the creepiest creature effects in recent horror history.

“Creating a system that had that combination of real world physics and fluid simulation while also being directable was something that we spent five, six months getting right in the beginning,” says Weintraub. “As soon as we had those tools in place, it was pretty simple to go through and knock it out shot by shot.”

Millions of sufficiently freaked out moviegoers later, Mama is the first big hit of the calendar year, the end product of a director, producer and VFX man at the top of their crafts. So how did Guillermo del Toro, a master monster maker and director with movies like Pan’s Labyrinth under his belt, take to his new producing gig? “I think he really enjoyed having input but letting Andy take it in his own direction,” says Weintraub, who sees similar monstrous collaborations in del Toro’s future. “He likes producing projects along the lines of his sensibility, so you probably won’t see him do a romantic comedy. But that would be a very interesting romantic comedy.”