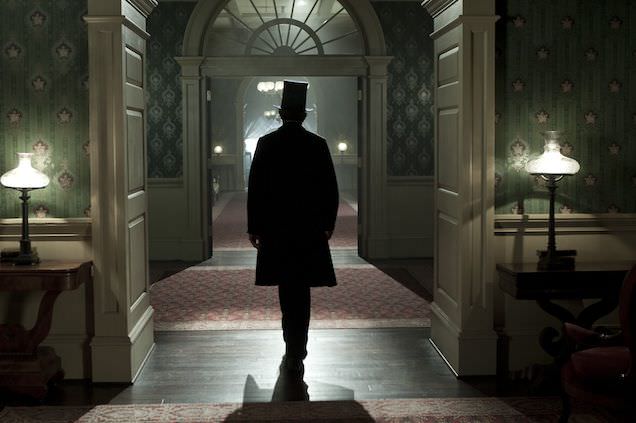 In Honor of Obama’s Inauguration, A Look At U.S. Presidents’ Favorite Films

The symbolism is both significant and apparent. In 2007, then-Senator Obama quoted a line from King’s 1967 sermon, stating: “I’m running because of what Dr. King called the fierce urgency of now.” In an article published one week ago by The Washington Post, Clarence B. Jones—MLK Jr.’s former advisor, speechwriter, and friend, as well as visiting professor at Stanford University’s Martin Luther King Jr. Research and Education Institute—says that as Obama embarks on his second-term, he “needs some of that confrontational thunder” present in Spielberg’s famed 2012 movie, Lincoln, drawing a clear parallel between the cinematic blockbuster and the current President of the United States.

It’s a correlation that joins a longstanding tradition of linking movies and politics.

In his journal for the Chicago Sun Times, film critic Roger Ebert once wrote about the importance of asking presidential candidates such a question. Ebert explained: “Everybody is making lists of the questions the candidates should be asked during the debates. My question would be: What's your favorite movie? As my faithful readers all know, the answer to that question says a lot about the person answering […] I persist in believing that cinematic taste is as important as taste in literature, music, art, or other things requiring taste (including food and politics).”

According to Ebert, a president’s favorite movie could very well be an unexpected lens zoomed into the motivations, personal endeavors, strengths, and weaknesses of our country’s highest elected officials. Let’s take a closer look:

Former President Bill Clinton has admitted to having seen High Noon about 25 times. A story of dedication, and heroism in the face of adversity, Clinton explained in a 2012 CNN interview with Harvey Weinstein: “Gary Cooper was scared to death, all alone. He did the right thing anyway.” Weinstein replied: “Did you ever feel, when you were the president, that you also were the sheriff – abandoned and … all by your lonesome?” Clinton laughed and said, “Sometimes.” He then explained how people were against “lots of things I did,” citing Mexico, Bosnia, and Kosovo as concrete examples. He continued: “You have to ask yourself, where is it going to come out at the end? When Gary Cooper rolled out of town at the end [of High Noon], they were happy. They were glad to be rid of Frank Miller and his gang.” And then the final, definitive statement: “It’s the same thing,” concluded Clinton.

Nixon’s favorite was Patton, a biographical movie celebrating the General’s tough personality, vulgar speech, and successes as a leader, which sounds somewhat familiar.

Ronald Reagan loved It’s a Wonderful Life, which he frequently screened at Camp David with his wife.

And Gerald Ford? He preferred Home Alone. Not such an odd choice, when considering his precocious and controversial pardon of Nixon in the wake of Watergate. In presenting the “Profile in Courage Award” to Ford in 2001, the late Senator Kennedy said in his statement the following: "I was one of those who spoke out against his action then. But time has a way of clarifying past events, and now we see that President Ford was right. His courage and dedication to our country made it possible for us to begin the process of healing and put the tragedy of Watergate behind us.” Who represents this sense of victory and vindication better than Home Alone’s young hero, Kevin McAllister?

Former President Jimmy Carter screened the most movies in the history of all presidents in the White House Theater. He watched over 450 movies in his single, four-year term. But those who knew Carter best, knew of his passion for movies—he was even denied selection for high school Valedictorian because he played hooky to catch a movie.

The Philadelphia Inquirer once reported that Close Encounters of the Third Kind was Carter’s favorite movie, and lest we forget: the infamous Jimmy Carter UFO incident in 1969. Keeping in mind his firm belief in extraterrestrials and public resolution to reveal such findings, it could be argued that this out-there behavior contributed to the fact that Carter, who was often described as erratic and peculiar in other areas of his presidency, happened to be the first elected president since Hoover in 1932 to lose a re-election bid.

Is it so shocking that the debonair and rumored playboy John F. Kennedy’s favorites were the James Bond films? He also enjoyed Spartacus, a classic story of a rebel who challenges the outdated political ways of Rome, which might have been influential on Kennedy’s mission to enact the Civil Rights Act of 1964.

Meanwhile, George W. Bush’s selections are strong examples of movies that potentially reflect both the former President’s personality and the circumstances of his presidency. A noted prankster during his college years at Yale, Bush is a fan of the Austin Powers series. He once even imitated the classic Dr. Evil move by raising his pinky up to his mouth in a gesture caught on camera during an interview with Politico’s Mike Allen. But after 9/11 and towards the end of his presidency, he preferred the much more somber Saving Private Ryan.

President Barack Obama happens to have his own favorite movies. Among them: Casablanca, Lawrence of Arabia, and yes, Lincoln. In a 2008 interview with CBS anchor Katie Couric, Obama said: “I’m a movie guy. I can rattle off a bunch of movies. But that Casablanca, you know.” Perhaps the most classic of classic movies, Obama’s love of Casablanca, a story of war, romance, and heroism, is an apt parallel to the president’s plight into his next term, where he’ll face new hurdles with a renewed determination—and a new promise to fulfill.

Today, President Obama will be sworn into office once again with two Bibles – one belonged to MLK Jr., the other to Lincoln. The symbolism there isn’t vague; both are men who have achieved extraordinary and historical acts of political reform, against all odds. Both, too, have been immortalized in major motion pictures.

It’s hardly any wonder, then, why so many of our presidents are avid film fans. Whether it’s Lawrence of Arabia, Casablanca, or Lincoln, movies encourage us to step into the realm of the unreal and transcend the impossible.  Here’s to hoping President Obama’s final term isn’t just one for the books, but also the big screen.