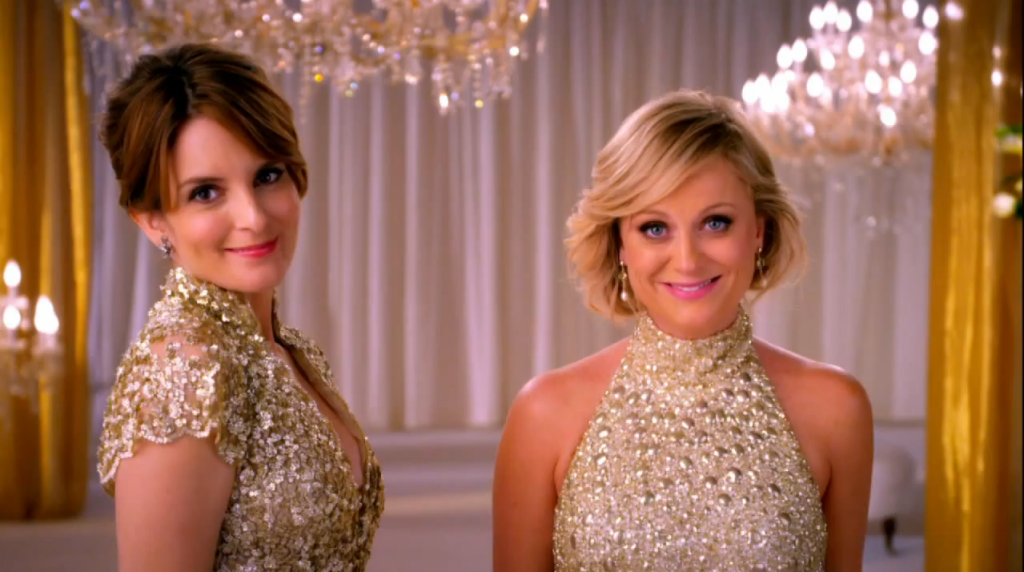 Even though the show hasn’t happened yet (and all due respect to the "most feared man in Hollywood," Ricky Gervais), we’re gonna go out on a limb and say that Tina Fey and Amy Poehler were the best Golden Globes hosts in the show’s 70-year history (airing Sunday, 8ET/5PT on NBC). Not only did the dynamic duo display the hilarity, inventiveness, and chemistry of longtime friends who also happen to be comedic geniuses, they also created a drinking game in anticipation of the big show. Would Billy Crystal do something like that? Please. (All due respect to Billy Crystal, who is no slouch in the hosting department.)

So yes, we're a touch premature calling this the best Globes ever, but, our confidence that it will be is well sourced—Fey and Poehler have been killing it together for years. The two met in Chicago as part of the improv team “Inside Vladamir,” and have steadily risen in the ranks of Hollywood's funniest people (man or woman), and now are poised to become, in our humble and totally objective opinion, the greatest Golden Globes hosts of all time.

Herewith, and in no particular order, our 10 favorite Fey and Poehler TV moments, together and separately. Happy Globes boozing!

PRESENTING TOGETHER AT THE 2008 EMMYS

Fey asks a visibly pregnant Poehler, “When are you due?” to which Poehler replies, “How dare you? I’ve gained weight for a role.” They then go on to speak in French, Chinese, and Robot, making audience members like Steve Carell crack up. Smart money says Poehler was skeeved when Best Actor in a Comedy winner Jeremy Piven kissed her belly onstage. Eww.

Biggie or Tupac? G-rated or unrated? Weird cravings or morning sickness? Stay in a hotel or stay with friends? This not-so-hard-hitting interview between two besties covers all this and more. And thankfully it lasts longer than 60 seconds.

Her fourth Emmy win, this one for Outstanding Actress in a comedy, includes the stellar line, “I want to thank my parents for raising me to have confidence that is somehow disproportionate with my looks and abilities.” Laughter! Tears!

The highlight of Fey’s spot-on impression of then-Governor Sarah Palin was this interview, when Fey spewed a stream-of-consciousness, nonsensical rant about Fannie and Freddie, job creation, health care reform, Barack Obama, and the importance of dollar value meals at restaurants. It was almost as funny as the real interview.

After a standing ovation, Fey, only the third woman to ever receive the award (after Lily Tomlin and Whoopi Goldberg) launched into a hilarious and heartfelt speech that covered everything from awkward puberty and the Tea Party to racism and The Benny Hill Show. Best line: “I promise to put this award in a place of honor to make sure my daughter does not pretend that it’s Barbie’s older husband who lost his body in an accident.”

STORMING THE STAGE AT THE 2011 EMMYS

When all the Outstanding Lead Actress in a comedy nominees rushed the stage during the 2011 Emmys, Poehler was the mastermind behind the bit. It took guts and was a show of female solidarity that Poehler, Fey, Melissa McCarthy, Martha Plimpton, Laura Linney, and Edie Falco stood together in beauty pageant style. The only thing that made it sweeter was when winner McCarthy called it her “first and best pageant ever.”

It was the battle of the best weekend update anchors when Poehler and Fey teamed up with Jimmy Fallon and Seth Meyers in this surprise appearance to riff on a strip club in Chicago that was offering a free lap dance to patrons who brought in a toy for needy kids. The winners: Fallon and Fey.

Yeah, this is going to be good.