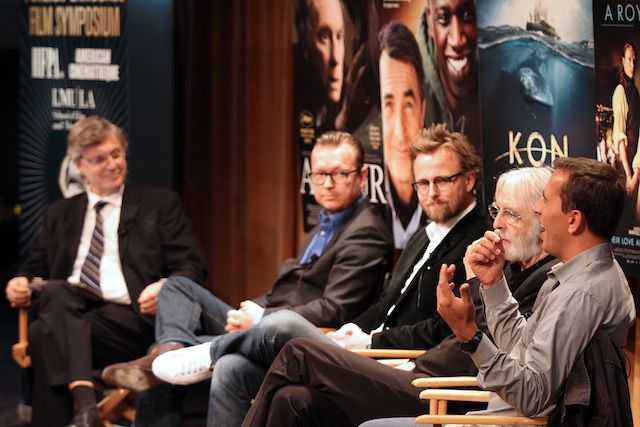 The much-anticipated 2013 awards season has finally arrived. As the world celebrates one of the most exciting years for film in recent memory, it’s clear 2012 gifted us some truly wondrous works of cinema. Among the standouts: Ben Affleck’s heralded Argo, the dreamy indie smash hit Beasts of the Southern Wild, the heart-warming Silver Linings Playbook, Spielberg’s historical biopic Lincoln with a predictably astounding performance by Daniel Day-Lewis, and Kathyrn Bigelow’s beautifully gritty Zero Dark Thirty.

It goes without saying that domestic films in 2012 have really hit—and redefined—the mark for great cinema. But one of the most exciting elements of this year’s awards season lies in the sheer abundance of excellent foreign film contenders.

Highlights include gems like Eric Rolendano and Oliver Nakache’s French comedy-drama The Intouchables; Jacques Audiard’s critically-acclaimed film Rust and Bone starring Marion Cottilard; and Espen Sandberg and Joachim Roenning’s sea exploration epic, Kon-Tiki.  Moreover, one of the year’s most exciting feats of film belongs to 5-time Oscar nominee Michael Haneke’s Amour, which has been heralded as one of the best movies in recent memory, nabbing a coveted Oscar nod for Best Picture (a historically rare feat for foreign films).

With so many outstanding films from far-flung places, the 2013 awards season may very well be remembered as a banner year for foreign film. So we were thrilled to catch the 10th Annual Golden Globe Foreign Language Symposium at Loyola Marymount University in Los Angeles on Saturday. Presented by the Hollywood Foreign Press Assoc., in association with the American Cinematheque and LMU’s School of Film and Television, the symposium spotlighted some of the year’s best foreign film directors in an intimate and engaging roundtable discussion.

Symposium participants included directors Michael Haneke (Amour), Nikolaj Arcel (A Royal Affair), and Espen Sandberg and Joachim Roenning (Kon-Tiki), with legendary Swedish director Lasse Hallström—whose films include What’s Eating Gilbert Grape, The Cider House Rules, and Chocolat—as moderator. The conversation that ensued shed light on various aspects of directing; from getting the best performances out of actors, to the use of story-boards, rehearsals, CGI, and test-screenings.

Here are a few key insights from the symposium:

For even more insight from these visionary foreign film directors, be sure to check out the symposium in its entirety: