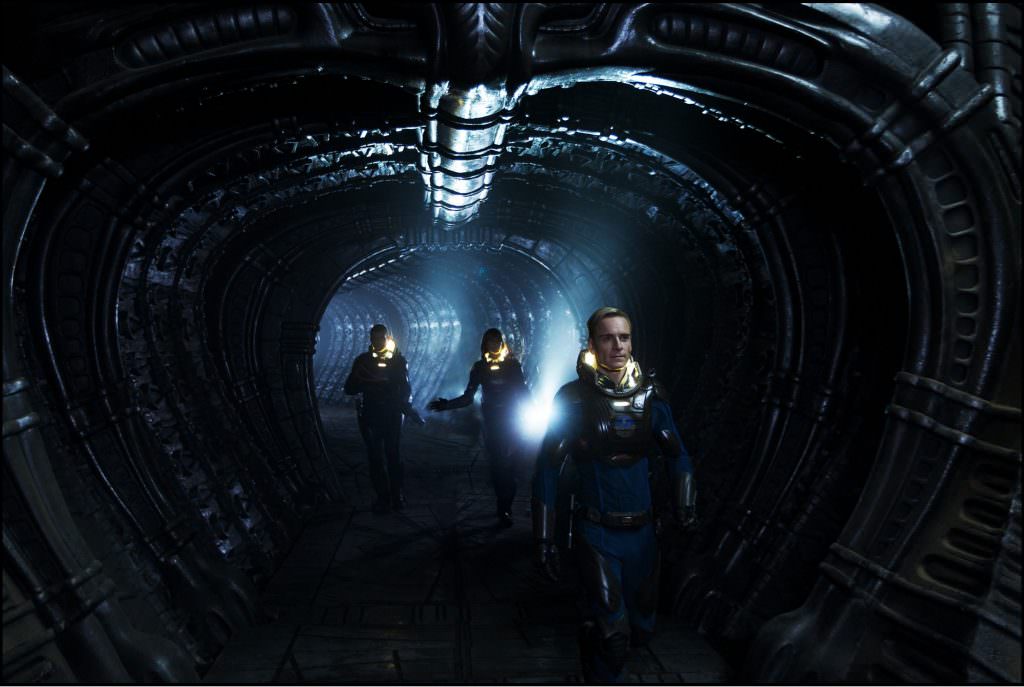 Hollywood’s always looking over the horizon towards the next big technological innovation, expanding as fast (if not faster) than any industry when it comes to making the most of cutting edge technology. Take this season’s blockbuster The Hobbit, which was digitally shot and is being projected in select theaters at 48 frames per second, twice the normal rate. As Douglas Trumbull told us in a recent interview, the resulting movie “…can become like a window onto reality.  It just doesn’t look like a movie anymore.  It looks like a live experience.”  It stirred debate on just how real a movie should look, with some fans arguing that it looked too vivid, and therefore not like a move is “supposed to.”

Last year’s Christmas season tech controversy swirled around The Adventures of Tintin (2011), Steven Spielberg’s 3D animation extravaganza, which utilized game changing live performance capture footage on which to build the fluid animation. A commonly heard refrain was, “it was too lifelike to pass as animation.” No, it wasn’t. It was a great looking movie, and one of Spielberg’s best and most exciting flicks. If you missed it then, check out the Blu-ray now, and if you like it, Peter Jackson has announced he’s working on the Tintin sequel as his next movie for 2015.

If you think these storms of controversy concerning fast moving movie technology are a new thing, you’d be wrong, because looking back over the history of movies you’d see it’s kind of the norm. Take 1930’s The Big Trail, directed by Raoul Walsh, which starred an unknown two-bit prop man turned actor named John Wayne in his first movie role. It was an epic Western shot on locations throughout the Pacific Northwest in the new Fox “Grandeur” process – which was an early (and gorgeous) 70mm widescreen, twice the normal size of standard 35mm film. Heavily promoted as the next big thing in movies, to go along with the arrival of sound, the widescreen epic was released onto gigantic movie palace screens and flopped. The studios quickly dropped this cumbersome and expensive technology until the early 1950’s, when TV began to challenge their cultural dominance. Curious about this John Wayne widescreen “flop?” You should be, it’s a great movie, and the Blu-ray looks fantastic.

Fast forward 50 years to another misunderstood Western epic, the infamous Heaven’s Gate (1980), directed by Michael Cimino. Given carte blanche by United Artists after his phenomenal success with The Deer Hunter (1978), Cimino also shot his revisionist western on locations in Wyoming and throughout the Northwest. The story is simple but never simplistic—cattle barons and hired guns battle against immigrant settlers for their lands in late 19th century America—and Cimino imbues it with a post-Vietnam cynicism and a modern, elliptical storytelling style. It’s also one of the most beautifully filmed movies of the last 50 years, shot by the great Vilmos Zsigmond. The Criterion Collection has put out a superb Blu-ray, which includes a Cimino audio commentary.

More Westerns you say? Check out two westerns by the great director John Ford, both making their debuts on Blu-ray this year: Fort Apache (1948), with Henry Fonda and that guy John Wayne again, and Rio Grande (1950), also starring Wayne. Unofficially known as the first and third movies of Ford’s “Cavalry Trilogy,” both center around the US Cavalry’s battles with Indian tribes in the decades after the Civil War.

Two rare movies making their US premiere on DVD and Blu-ray come from that baroque modernist of Hollywood moviemaking, Orson Welles, who once said he “prefer[s] the old masters; by which I mean: John Ford, John Ford and John Ford.” The Magnificent Ambersons (1942), Welles’s follow-up to Citizen Kane (1941), is an elegiac drama of a 19th century American family slowly coming apart at the dawn of the industrial 20th. His intense, brooding, noirish adaptation of Shakespeare’s Macbeth (1948) – shot in three weeks on a shoestring budget with papier-mâché sets for the “B” studio Republic Pictures—is a certainly among the greatest Shakespeare adaptations ever produced in Hollywood. It shows without a doubt what even a second tier Hollywood production studio was capable of in the hands of a genius.

Even though Republic Pictures was a small, independent studio, it was never second rate. From the mid-forties to the late 50’s it produced and/or distributed some of the best movies of the period.  This year Olive Films licensed for release on Blu-ray and DVD over 100 films from the Republic library, now controlled by Paramount, many of which have either never been released in any home entertainment format or have not seen the light of day since VHS. Coupled with their recent licensing deal for select Paramount titles, Olive Films looks to be one of the most interesting home video houses out there. This year Olive premiered on Blu-ray and/or DVD several great movies, little seen since their initial theatrical releases: startling film noirs – from director Fritz Lang’s Secret Beyond the Door, (1947) and George Cukor’s A Double Life (1947), to director Raoul Walsh’s (surviving the poor box office from The Big Trail, seventeen years earlier, above) Freudian, western noir, Pursued (1947) starring Robert Mitchum; two tough dramas starring the iconic John Garfield, Body and Soul (1947) the story of a boxer, and Force of Evil (1948), a poetic gangster drama, and one of the best films of the 1940s;  director Max Ophuls’s romantic melodrama Letter From an Unknown Woman (1948) starring Joan Fontaine; director Nicholas Ray’s cult western Johnny Guitar (1954); director Frank Perry’s creepy cult thriller Man on a Swing (1974), and director Robert Aldrich’s late masterpiece, the political thriller Twilight’s Last Gleaming (1977), with Burt Lancaster, Richard Widmark, Paul Winfield, and the recently passed Charles Durning, all giving their usual top notch performances.

The summer Sci-Fi/Monster 3D film Prometheus (2012) was a return for director Ridley Scott to the precise, long-take style he made his name with in The Duellists (1977), Alien (1979), and Blade Runner (1982). The 4-disc Blu-ray set contains a cornucopia of information on the making of the movie, and is easily one of the best Blu-Ray’s of the year.

Prometheus can be seen as the latest progeny of director Ishiro Honda’s seminal Godzilla (1954), which finally got the deluxe Blu-ray treatment it deserves from The Criterion Collection. Included is the original Japanese film plus the shorter 1956 “Americanized” dubbed cut. Both include detailed audio commentaries, and the disc also contains interviews with the actors and crew.

This is certainly the year to be an Alfred Hitchcock fan, with 20 of his nearly 60 films arriving on Blu-ray. Every major studio for which Hitchcock directed films during his fifty-year career got in on the act. Warner Brothers released the Master of Suspense’s thrilling Strangers on a Train (1951) and his only foray into 3D, Dial M For Murder (1954). MGM-FOX released the three films Hitch directed for legendary producer David O. Selznick: his American debut Rebecca (1940); his first movie with Ingrid Bergman Spellbound (1945); and his 40’s masterpiece Notorious (1946), with Cary Grant and Bergman again. Paramount released his stylish widescreen caper To Catch a Thief (1955) with the incomparable pairing of Cary Grant and Grace Kelly; and The Criterion Collection released one Hitch’s best British films, The 39 Steps (1935). Universal capped off the year by releasing Alfred Hitchcock: The Masterpiece Collection (1942-1976), containing 15 movies spanning the great director’s career, including the Blu-Ray premiere of Vertigo (1956), recently named the greatest film of all time by the British film journal Sight and Sound.

And now a quick glance at some of the best box sets of the past year.

ULTIMATE BUSTER KEATON COLLECTION (1920-1937) collects all of the shorts and features the great comedian starred in across 14 Blu-ray discs.

CASABLANCA 70TH ANNIVERSARY LIMITED COLLECTION GIFTSET (1942). The great wartime love story comes with 2 Blu-rays containing the movie and many extras, a Standard DVD with the movie only, a poster, a 60 page hardcover book, and 4 drink coasters.

FOREVER MARILYN COLLECTION (1953-1961). Marilyn Monroe, one of Hollywood’s most enduring stars, gets the Blu-ray treatment from Fox, with 7 of her best movies packaged together, 5 of which are making their Blu-ray premiere.

LAWRENCE OF ARABIA 50TH ANNIVERSARY LIMITED COLLECTOR’S EDITION (1962). David Lean’s widescreen epic comes packaged with 3 Blu-ray’s. The movie is on Blu-ray 1 in a 4K digital restoration, with Blu-rays 2 and 3 containing numerous documentaries and extras. A CD of the score, an 88 page book, and a individually numbered 70mm film frame round out the package.

THE DARK KNIGHT TRILOGY BOX SET (2005-2012). Christopher Nolan’s bold reimaging of the Caped Crusader comes on 5 Blu-ray discs (2 each for The Dark Knight and The Dark Knight Rises, the second discs contain the copious extras), plus a 64-page excerpted version of the book “The Art and Making of The Dark Knight Trilogy.