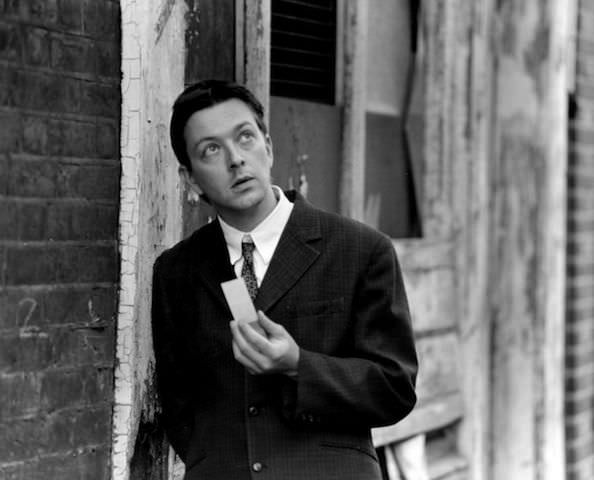 While some directors begin with a bang—Godard’s Breathless (1960) comes to mind—others begin with a whisper, only to be heard later on as the greatest archivists in cinema amplify its nascence. Today, The Criterion Collection shines its light, for the first time, on Christopher Nolan with the Blu-Ray release of Following (1998). Now known for the latest Batman trilogy, originally recognized for the temporally rearranged suspense film Memento (2000), and most respected by film buffs for his 2002 remake of the 1997 foreign thriller Insomnia (the original was a first feature for Swedish director Erik Skjoldbjærg), Christopher Nolan is no underground cult favorite. But his British debut, Following, has been—until now.

To say hardly anything about the premise of Following would already tell too much. Like Memento, it utilizes a broken narrative, and only once it’s over does the viewer fully comprehend what they’ve just seen. It’s told as a flashback with the main character Bill stating, “The following is my explanation.” Of course, the title is far from the only thing Nolan creates here to carry a double meaning. Bill is unemployed, lonely, and hoping to someday be a writer. So to kill time and mine material for characters, he starts following people during the day. He has a few essential rules: his ‘mark’ has to be random. No one he knows. He can’t follow the same person twice. Once he sees where a ‘mark’ lives or works, he’s learned too much and must move on to someone else. Of course, he breaks his own rule and takes interest in a dapper young man named Cobb. Cobb is a burglar more amused by intruding on and collecting from the personal sanctuaries of others than any actual monetary gain. Soon, Bill becomes Cobb’s partner (only to get material for his writing, you see) and what follows is the confusing web of a money filled safe, a possible murder (or two, or three, or none), a gangster pornographer, and a femme fatale.

The first film of any director is almost a genre in and of itself. One cannot properly judge a first film until much further into a filmmaker’s oeuvre—oftentimes, significance is retrospective. One could also argue that not only is it imperative to judge a first film against the rest of a director’s work, it’s instructive to bear in mind the firsts of his or her peers. After all, what does Jim Jarmusch’s Permanent Vacation (1980) mean on its own, versus what it means when compared to Gus Van Sant’s Mala Noche (1986)?

With its stark black-and-white 16mm film stock, haunting electronica film score, and psychological neo-noir style, Following bears more than a passing resemblance to π, the first feature by America’s own master of densely winding psychological tales, Darren Aronofsky. While π (1998) was able to ride the wave of America’s indie boom, Following’s place in cinema was a little more precarious. When the 90’s put UK cinema on the map, Britain found its first contemporary masterpiece in Mike Leigh’s Naked (1993) and drew international interest with Danny Boyle's Trainspotting (1996). Sadly, three years later, the noise may have quieted down, which could account for Following’s ability to slip unnoticed onto VHS obscurity. It also might explain why Nolan came to the US for his next film.

Nolan’s feature length kick off has been rescued from obscurity with Criterion’s loving Hi-Def transfer, which makes the low budget 16mm look like 35mm without losing any of its original honest grit. If the transfer alone isn’t reason enough for you to seek out this re-release, how about a treasure trove of special features—the kind that makes Criterion Collection worth more than their weight in masterworks? Buyers get a fantastic director’s commentary track; Doodlebug, a three-minute short filmed by Nolan two years earlier, starring Following’s Jeremy Theobald; a side-by-side script comparison with three of the film’s scenes; and perhaps the coolest feature yet: a recut of the film that places every scenes in chronological order. Whether you’re looking to deepen your knowledge of Christopher Nolan beyond the Batman trilogy, or simply looking to replace your now decade-old DVD copy, The Criterion Collection’s Following Blu-Ray is an indispensable addition to any cinema lover’s shelf.