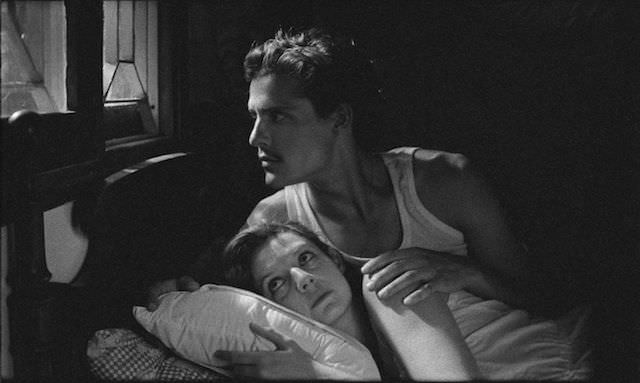 Remorse and Paradise: Miguel Gomes’ Tabu Compels Beyond The Screen

Tabu—the new feature film by Portuguese director, Miguel Gomes—ruminates on themes of crime and guilt. What the viewer is left to question is what sort of crimes are we talking about? There are crimes of passion, crimes of love, war crimes, crimes for monetary gain, and so on. Yet, the film’s characters seem to speak and act on crimes of the soul, when one’s desires and urges become a crime in and of themselves–where the mere thought of them can bring along a culpability whose punishment is already wrought before the first illicit touch.

The film begins with a fable-like introduction recalling Paul Thomas Anderson’s own parable of remorse, Magnolia (2000). It tells the tale of an early colonial explorer (think pith helmet and puffy tan pants) who, while searching the Savannah, comes across the vision of a female spirit whom foretells of his death—at his own hand. The explorer, knowing this, leaps into a river where he is consumed by a crocodile and the legend lives on amongst the African Natives for the rest of time. Gomes then cuts to present-day Lisbon, with the title-card, “Part One: Paradise Lost.”

We meet Aurora, an old woman living her final years alone, cared for only by an African housekeeper, Santa, and watched over by her neighbor, a middle-aged philanthropist named Pilar. As Aurora’s health deteriorates, so does her lucidity. Santa seems willing to do as she’s told by Aurora’s absent daughter, while Pilar—whose compassion is only matched by everyone else’s apathy—strives to get Aurora professional help. When Aurora’s health worsens and Santa at last takes her to a hospital, she begins making bizarre requests. Among them, and while on her death bed, she asks that Pilar find a man by the name of Gian-Luca Ventura so she may see him before she dies. Pilar makes it back to the hospital with Ventura too late. He attends Aurora’s funeral solemn, teary eyed, laying a bouquet of flowers on her grave. On the way back to the airport Ventura begins to tell Pilar and Santa his and Aurora’s tale. So begins part two: “Paradise.”

Tabu’s second half contains no dialogue. The only speaking is done by the elderly Ventura in voiceover. He explains that fifty years ago, Aurora lived on a farm in the African Foothills of Mount Tabu. After the death of Aurora’s father, who lost all the family’s money, she marries a kind man by whom she soon becomes pregnant. It is then that Ventura, a lover of many women who has lived past crimes to which he never speaks, arrives looking to capitalize on the burgeoning Portuguese and British colonies. The two begin a torrid affair. As their love grows, so do their misdeeds, all against the backdrop of an imminent political uprising amongst the natives, who look to drive the imperialist occupiers from the region.

Despite starting off with a generous buzz–the film won the critic’s jury and the Alfred Bauer Prize at the Berlin Film Festival–Tabu may end up being overshadowed by Academy Award hopefuls like Lincoln and Argo, especially this late in the season (the film did manage to rank number ten on The Village Voice’s Top Ten Films of 2012). Still, Tabu has a venerable air. The film boasts beautiful black and white cinematography and a heart-wrenching script that channels the bittersweet tomes of love and shame that were the mark of 1930’s French cinema.

Herein lies the success of Tabu: the film finds power in its epic sadness. While Aurora remains cold and bitter from a lifetime of having what she wants (read: 'poor little rich girl' complex), Ventura, by comparison, appears quite mournful. Perhaps he never considers anything he and Aurora do to be criminal at all. He considers his soul lost to the previous misadventures of which he hints. The crimes he commits with Aurora might be the only right actions of an otherwise corrupt existence.

At it's core, Tabu is about perdition. While some consider life too short to regret things you’ve never done, Tabu paints a gorgeous portrait of two people who’ve had to spend the entirety of their long lives regretting what they have done. As a friend of Pilar’s says in part one, “The hand is rough but the soul is delicate.” Are Aurora and Ventura’s hearts prepared to pay the price for the actions their bodies permit? The answer of course is complicated, but that's precisely the point. Tabu resonates like the lasting cinema of a by-gone era, and the philosophical issues the film explores are well worth meditating on long after the movie ends.