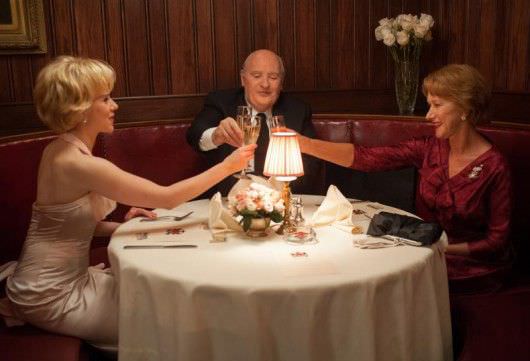 Thanksgiving. A time to be thankful for your family, your friends, and the fact that most dinners don't end up devolving into anything resembling what happens in the clips we've assembled below. We combed through MovieClips.com’s archives and curated this list of 12 truly uncomfortable dinner moments, ranging from the ridiculous to the weird to downright hostile, and we give thanks to the medium of film, which has created so many memorably awful dinner scenes it makes most of our family meals seem like lessons in bonhomie.

Without further ado, enjoy the meal:

Con-men Lawrence (Michael Caine) and Freddy (Steven Martin) are in the midst of a lengthy con of a wealthy Palm Beach woman (Frances Conroy). The meal takes quite a turn when Freddy, who is going by 'Ruprecht' for the con, asks if he can, well…just watch:

Daisy Arujo (Julia Roberts), a teenage pizza shop waitress, has dinner with her new boyfriend and his patrician family. Things go from slightly uncomfortable to unbelievably so, with a finale that begged the question why haven't we ever tried that? Also, Matt Damon’s in this clip, and he’s about ten:

If you were growing up in the late 1980s and early 90s, you might have seen this film in the theater, and then on TV, a few thousand times like we did. Everything’s going well here, but, this is a Chevy Chase movie, so something (usually him) has to fall flat. This time, it’s the center piece of the meal:

Such a good cast—Raul Julia as Gomez, Angelica Huston as Morticia, Christina Ricci as Wednesday, Christopher Lloyd as Uncle Fester…who wouldn’t want to sit at this table (but not eat a single thing)? Only Uncle Fester is hiding something, and his frayed nerves are put to the test by this fantastic family of freaks:

Nothing says uncomfortable like a public confession of love, in front of your whole family, to somebody who’s not only not your husband, but is your sister’s husband. The cast is bonkers (Anne Bancroft, Holly Hunter, Robert Downey Jr., Dylan McDermott, Claire Danes) and this scene, in particular, manages to be both uncomfortable and powerful.

The reigning champion of the awkward moment, Gaylord ‘Greg’ Focker (Ben Stiller) says grace, while father-in-law (an ex-CIA agent) Jack Byrnes (Robert De Niro) makes a lot of faces, uncomfortable with Greg's bizarre attempts at the pre-meal ritual. Then Greg mistakes an urn for a vase and, well, like the book we all had to read in high school, things fall apart:

Dinner With the Hepburns

Howard Hughes (Leonardo DiCaprio) has dinner with Audrey Hepburn and her family. In what has to be the most ancient creator of awkward dinner moments, the rich, well-bred and obnoxious Hepburns do everything short of pinching their noses at the self-made Hughes, until he’s had quite enough. This is the most cathartic of the scenes we chose:

Dinner With the Real Girl

Lars Lindstrom (Ryan Gosling) has finally met a girl he really likes, so he brings her to his brother and sister-in-law’s house for dinner. A totally normal scenario unfolds:

Are you noting a pattern here? The blue-collar-versus-white-collar battle rears its head again, only made exponentially more awkward for happening during Thanksgiving dinner, amongst your in-laws, and in front of your children. In this scene, recently laid-off corporate executive Bobby Walker (Ben Affleck) dines with his wife, her sister, and her sister’s contractor husband Jack Dolan (Kevin Costner), who gives him a piece of mind regarding corporate salaries:

I Speak Your Language

Talk about culture shock. Barry (Steve Carell) sits down with Tim (Paul Rudd) and a Swiss couple. Barry assures them the's a great fan of their home country, and proceeds to do everything short of accuse them of appeasing the Nazis during World War II in the process:

Claire and Phil Foster (Tina Fey and Steve Carell) are a bored married couple trying to enjoy their 'date night,' and do so by making fun of other couples at the restaurant, a tried-and-true method of spicing up an otherwise dull dinner:

Ben Stiller (the eponymous Greenberg) is having dinner on his birthday with his friend Ivan (Rhys Ifans), and puts the capital M in Misanthropic. An underrated film, Greenberg was basically a masterclass in creating uncomfortable scenarios, taught by the master himself: