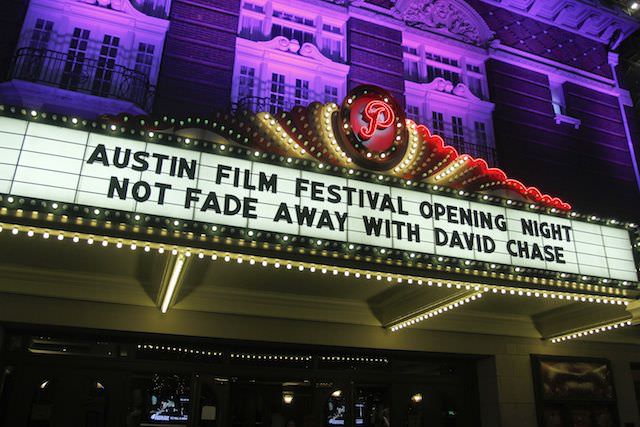 Behind-the-Scenes at the Austin Film Festival

The Credits recently traveled to the Austin Film Festival—a truly unique festival dedicated to the art of screenwriting. The week long event combines extraordinary films with dynamic and engaging discussions, Q&As, and expert panels. Screenwriting icons like Eric Roth, Chris Carter, Paul Feig, and David Chase shared tricks of the trade with festival-goers through workshops, live script readings, and intimate interviews. And A-list actors like Billy Bob Thornton and James Franco were on the scene to promote their latest movies and to shed insight into their creative processes.

The Austin Film Festival is a non-profit that has been an integral part of the community in Austin, Texas since 1993. Originally titled The Heart of Film Screenwriters Conference, AFF has evolved into a no-holds barred celebration of screenwriters, a demographic often under represented in the film industry. AFF seeks to bring together aspiring screenwriters, filmmakers, producers, agents, and seasoned industry leaders to honor the script as an invaluable part of cinema. Participants of the festival have included Joel and Ethan Coen, Russell Crowe, Wes Anderson, Oliver Stone, and Claire Danes, among others.

We were fortunate enough to get a behind-the-scenes look at the making of the Austin Film Festival, which is the culmination of a year-round effort to curate the October festival with scriptwriting aficionados and passionate cinephiles. We spoke with Founding Executive Director Barbara Morgan, Film Program Director Stephen Jannise, Director of Marketing Taylor Cumbie, and Conference Director Erin Hallagan about what it takes to put AFF together. We also chatted with The X-Files creator and writer Chris Carter and director and award-winning actor Billy Bob Thornton. Check out our video to get an exclusive behind-the-scenes look at one of our favorite film festivals.

And here are a few images from the festival:[royalslider id="4"]

For more information about Austin Film Festival and their ongoing contributions to film, be sure to visit the fest's website.