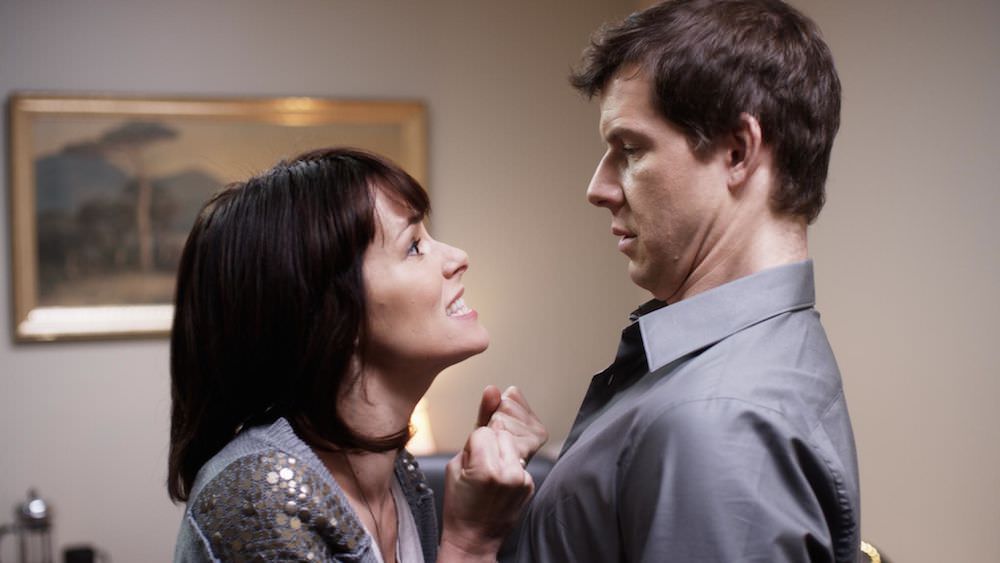 Writer-director Michael Walker made his feature filmmaking debut with the 2000 thriller Chasing Sleep, starring Jeff Daniels, which premiered at the Toronto International Film Festival and went on to win Best Film at the Festival of Fantastic Film in Sweden.

His latest film, Price Check, is a far cry from the thriller genre, but this comedy about a middle-class family and the eccentric boss who shakes up their world is just as titillating. It stars Parker Posey (as high-powered exec Susan Felders) and Eric Mabius (as Pete Cozy), a suburban dweller working in the pricing department of a middling supermarket chain. The film premiered at Sundance to rave reviews and opened November 16 in select cities.

The Credits: How did you come up with this idea?

WALKER: Two ideas came together: One of them was seeing my friends and all the problems they were having with money, insurance, kids in school, trouble at work, paying the mortgage. There weren’t any movies talking about anything like that. The other idea was Parker’s character, which I was always interested in doing: A really good boss who inspires people working at a job that isn’t too interesting.

Did you have Parker in mind when you wrote this?

No, but she was the first person we sent it to.

How would you describe her character?

In the script it says, if she wasn’t a woman, no one would call her a b–ch. Which I think is true. There are a lot of ideas in the film, one of which is traditional home life versus the career woman. The career woman is ambitious and can’t get her personal life together at all, versus Pete, who can get his personal life together but doesn’t have any ambition or know what he wants to do.

Did you research the supermarket business?

I did. Shelving strategy isn’t that glamorous, but when you hear about it from someone who’s really articulate, it becomes very interesting. Also, it’s a very private business. It’s secretive stuff. Surprisingly, I couldn’t even get access to a lot of their offices.

Should we take the name Pete Cozy literally?

I generally don’t like doing that stuff, but that somehow slipped by. But yeah, he’s generally cozy in his job, cozy in his life, and is taken outside of his comfort zone.

What about the title Price Check? What does it mean to you?

Well, it’s a supermarket term, but it’s also about your value in life. Is it based on money? How do you judge success? How do you evaluate your life? The movie’s about choices you make in your life and how you think they’re yours, and they’re not necessarily.

Do reviews mean much to you?

I’ve been reading these as they’ve been coming out. It hurts when you get bad reviews. It hurts when you read on the internet that one person doesn’t like the movie. It’s awful. But the other side of that is if someone really likes the movie and then they also like some other movie that you hate. So you sort of lose perspective on it. I like to read reviews where they understand the movie. If they like it or don’t, that’s fine, as long as they’re getting all of the stuff that’s in there. It means they paid attention.

Have you been crippled by a bad review?

No, my reviews for this and for Chasing Sleep have been around a B-plus, which is kind of how I did in school anyway. I’m used to it. (laughs)

You graduated from New York University's Tisch School of the Arts Film Program, and also studied at the Stella Adler Conservatory for Acting in Los Angeles. How important is it for a filmmaker to go to film school?

I’m really glad I did. There’s no question you can get along without going to film school, but I do think you need a college education of some sort. I got a lot out of it. There’s an art to film and a craft to film. You can learn the craft in a couple days, but there’s an art to it too.

What did you learn about directing by studying acting?

That helped me a lot. I’m sort of shy, so that definitely helped me when it came to talking to actors. I wasn’t very good at doing that.

What kind of set do you run?

Price Check was fun. There wasn’t much hanging out after work because there was no time to do that, but everyone had a good time. I don’t like a lot of chaos on the set. I storyboard everything. Everything’s as prepared as it can be, especially on these short, low budget films. I hear about other films that are low budget and they improvise, and I don’t know how they do it. I can’t imagine.

How did you get Dean Wareham and Britta Phillips of Luna to do the music?

I put Dean into the script just as a reference, and a friend of mine who knows him said, “Want me to send him the script?” So we did, and they said they’d be interested in doing it. We worked it out so they could be in the movie and do the soundtrack, and it would be a history of indie music too. It worked out really well. I love the soundtrack.

Me too. And you’re already onto your next film, The Maid’s Room. What can you tell us about it?

We’re waiting to hear from Sundance. It’s more of a psychological thriller, much more like Chasing Sleep. It’s about a maid who gets a job in the Hamptons. The 18-year-old son is out one night and hits somebody on the road while he’s drunk, and they try to cover it up, and the maid’s the only one who knows. It’s a thriller. We’ll see how it does.