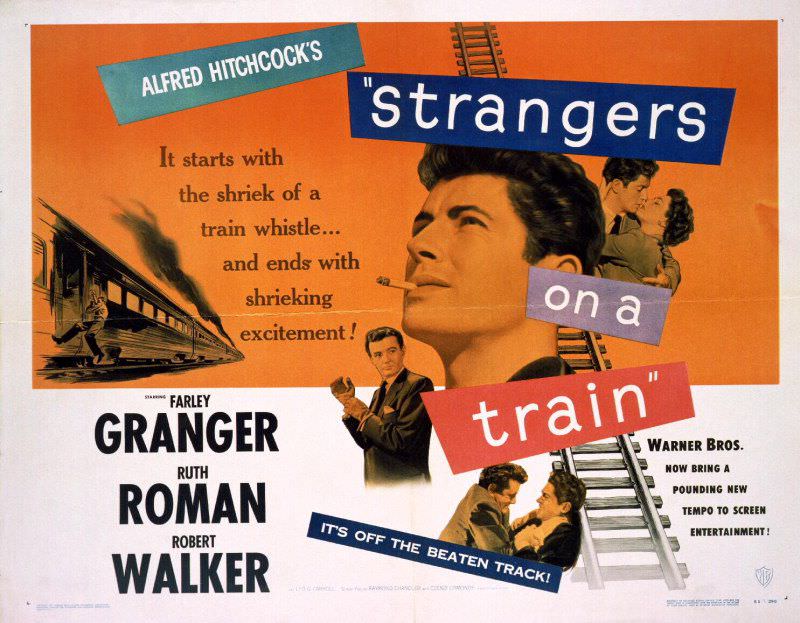 Released on Oct 9, Warner Bros’ Blu-Ray of Alfred Hitchcock’s Strangers On A Train (1951) showcases the Master of Suspense returning to top form after several years of critical and commercial disappointments. At the beginning of the 50’s, a decade in which he would produce some of his greatest movies, Hitchcock was hungry for material that would bring out the best in his work. He found it in the eponymous debut novel of a 29-year old Patricia Highsmith, a burgeoning master herself in psychological thrillers on the page. Hitchcock had found a sure vehicle for a successful picture on all fronts.

Strangers On A Train tells the story of two strangers, each struggling with personal troubles, who meet by chance on a train and seemingly decide to murder the other’s troublesome victim-to-be. Tennis pro Guy Haines wants to divorce his nagging young country wife to marry his mistress, D.C. socialite and daughter of a U.S. senator, Anne Morton; affable, loquacious, playboy socialite Bruno Antony has an overbearing father cramping his lifestyle. The hitch is that beneath Bruno’s charm simmers a deranged psychopath, and although naïve Guy gets off the train believing he never agreed to the deal, Bruno has a decidedly different idea of their meeting. These strangers lives are now horrifically intertwined, a story that leapt off the page of the novel and was beautifully adapted for the screen by a master back in top form.

Yet the story behind the making of Strangers On A Train wasn't all smooth sailing. To give the production extra panache, Hitchcock hired legendary mystery writer Raymond Chandler to adapt the screenplay. However, these two giants could not be more temperamentally different, and the relationship quickly soured. Hitchcock dumped Chandler’s draft and started over with Ben Hecht’s assistant, neophyte screenwriter Czenzi Ormonde when Hecht proved unavailable. Joined by Hitchcock’s associate producer Barbara Keon, and the director’s wife Alma, a largely unheralded collaborator to Hitchcock in his 50+ year career, these three women, under the director’s close supervision, turned out in three week’s time enough of a completely rewritten script so that the production could begin on already scheduled East Coast locations. With the rest of the writing soon finished while shooting got underway, Hitchcock and crew, along with his first rate cast—Farley Granger as Guy, Robert Walker playing against type as the psychopathic Bruno, and Ruth Roman as Guy’s love interest Anne, managed to successfully execute on a deliciously wicked script, delivering a magnificent critical and commercial success for the director, surely one of Hitchcock’s best thrillers. The Blu-Ray includes an extended preview version not seen in US theaters, commentary tracks by director Peter Bogdanovich, Hitchcock’s daughter Patricia Hitchcock O'Connell, who had a small role in the film, and numerous others. 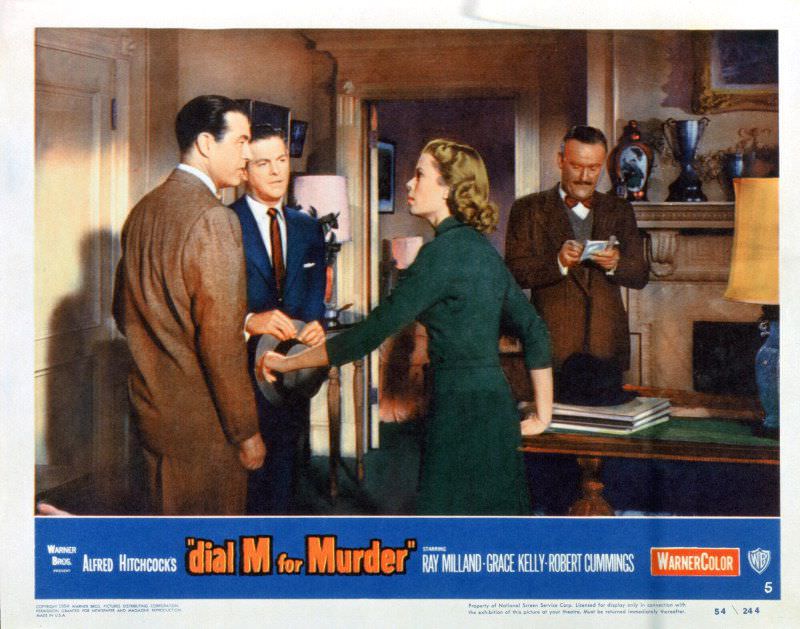 Another Blu-Ray debut that came out on Oct 09 was Dial M For Murder (1954), shot and originally released in 3-D, towards the end of that technology’s first successful run. It stars the incomparable Grace Kelly as Margot Mary Wendice in the first of her three classic films for Hitchcock (she went on to star in Rear Window and To Catch a Thief).

Kelly plays a wealthy American socialite in London, momentarily unfaithful to her retired tennis pro husband played by Ray Milland, who slowly finds herself at the wrong end of a blackmail/murder plot devised by said husband. Hitchcock’s use of the 3-D technology is wonderfully suspenseful, even a little creepy, whether it’s placing the viewer right in the middle of scenes of Milland deviously constructing and executing his near perfect plan, or in the harrowing attack on Kelly that goes spectacularly wrong. With Robert Cummings as Kelly’s love interest and John Williams as Chief Inspector Hubbard of Scotland Yard, who team up to try and solve the crime, which now implicates Kelly’s Margot Mary Wendice for premeditated murder. Warner Bros. has done a full restoration on the 3-D and 2-D elements, so those with both a 3-D capable Blu-Ray player and a 3-D capable HDTV can enjoy the movie in its original 3-D glory. The 2-D movie is just as thrilling. Both these Hitchcock classics are highly recommended.

And If that’s not enough Hitchcock for you, stay tuned for the theatrical release of Hitchcock on Nov 23rd, starring Sir Anthony Hopkins as the legendary director, which dramatizes the making of one of his greatest movies, 1960’s Psycho. With Scarlett Johansson as actress Janet Leigh, Jessica Biel as actress Vera Miles, James D’Arcy as actor Anthony Perkins, and Helen Mirren as Hitchcock’s wife and unsung collaborator Alma Reville.