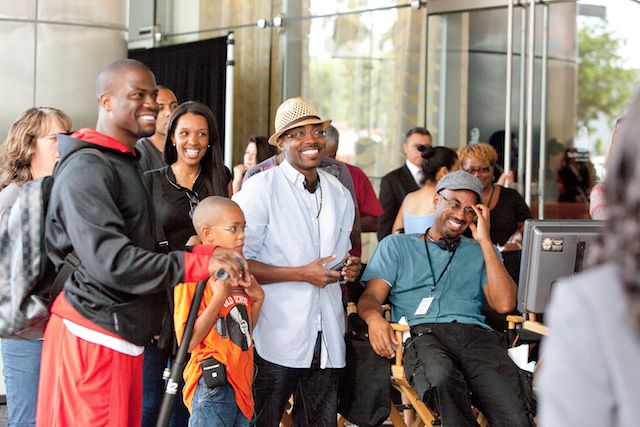 Sony Pictures Screen Gems Goes Green on the Set of "Think Like A Man" from The Credits on Vimeo.

In Hollywood, screens aren’t the only things going green. In the recent Screen Gems picture Think Like a Man, the studios went full-throttle in adapting environmentally-friendly filming practices by employing 100 percent LED and energy efficient light-bulbs on set. The romantic comedy, directed by Tim Story, tells the tale of four friends who try to outwit their wives when they begin using Steve Harvey’s relationship advice against them—and thanks to innovations in on-set lighting, the rom-com is also a serious pioneer in green filmmaking.

Of course, energy efficient technology isn’t new to movie sets, but it’s the first time in history a movie has been entirely lit with LED and energy efficient light.  Regarding the sustainable decision to source LEDs for Think Like A Man’s entire lighting operation, Sony Pictures Production Administration President Gary Martin said, “Sony Pictures is committed to making great content with a smaller and smaller energy footprint, and Think Like A Man is a great example of Screen Gems’ continuing tradition of actively reducing the impact and waste of a major feature film production.”

Traditionally, lighting is one of the more technical aspects of filmmaking on set. And, as anyone who’s been on a well-cooked set can attest, the energy emitted by conventional lighting isn’t exactly mild. But LEDs could open up a wealth of possibilities for movie sets everywhere. Despite the lower emissions, LED lights pack a powerful punch. They have the capacity to light a set approximately 200 times longer than your standard set light. They also don’t emit as much heat, cutting down on AC and cooling costs on set, and overall, they’re 75% more efficient than traditional movie lights.

To learn more about LEDs on set and the future of green filmmaking, check out this behind-the-scenes video for a close-up on how Screen Gems lit up Think Like A Man with 100% LED and sustainable lights. As Glenn Gainor, Screen Gems’ SVP of Physical Production confirms at the video’s start, “Filmmaking today has become more environmentally sustainable—more so than it’s ever been.”