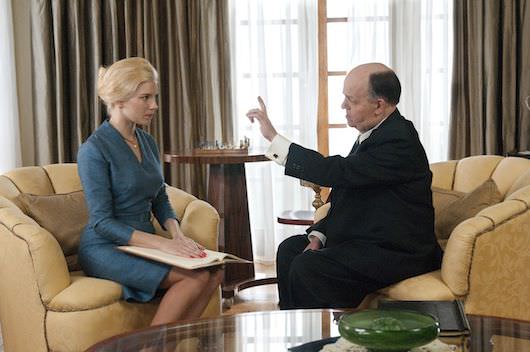 Movie lovers, and Hitchcock fans in particular, are about to get a fascinating double dose of behind-the-scenes dramatization. First up is The Girl, which premiered on HBO on October 20, tells the story of the relationship between Hitchcock (Toby Jones) and Tippi Hedren (Sienna Miller), the model selected to star in The Birds despite having no acting experience. Then, on November 1, Hitchcock will premiere at the AFI Film Festival – and is slated to open in select theaters by the end of the month. Hitchcock deals with the filming of Psycho, focusing on the relationship between the director (Anthony Hopkins) and wife Alma Reville (Helen Mirren) while he is making one of the greatest horror films of all time. (And to answer your next three questions: Scarlett Johansson plays Janet Leigh, Jessica Biel plays Vera Miles, and James D'Arcy plays Anthony Perkins.)

Novels about writing are hard to read; we can't think of any paintings about painting or songs about songwriting, but both of those seem like bad ideas. Film, though, is different, as movies about moviemaking can be both profound and fun. As a viewer, you're free to ponder the layers: Text vs metatext; the film vs. the film-within-a-film. But you're also free to ignore that and simply enjoy the opportunities for comedy and intrigue offered by a film set. A film set that is itself the set of a film. The film about the film.

Here are ten great movies (or at least noble attempts) that peel back the skin of polished cinematic product and tell their stories within the guts of the process. Some are imagined accounts behind real movies; others are fiction from the title sequence to the credits. For the purposes of this list, we've left out – good as they are – biopics like Chaplin, Ed Wood, and Boogie Nights, and concentrated on films that are about making a single film. Even so, the list of what might have been included – among them King Kong, Le Mepris, The Player, and Bowfinger – runs well beyond ten entries. What can we say? Everything, even a Fellini movie, has to end sometime.

Successful director Guido Anselmi (Marcello Mastroianni) is blocked. Everyone expects his latest work, a quasi-science fiction movie, to be yet another hit, but Guido can't bring himself to care about it too much. He's going through personal problems – the harem of sorts that has come to surround him (including a wife and a mistress) is rebelling. Guido is weary of his complex life, of having so many people depending on his every decision, yet it is through memories and imagined dialogues that he finds his way back, and ultimately rededicates himself to his career. A three-hour nonlinear autobiographical portrait of an apathetic, angst-ridden director? In anyone else's hands, this would be a recipe for self-indulgent disaster, but when you're Fellini – arguably the greatest director of all time – you can get away with it.

After a string of successes in the early and mid 1960s, including Breakfast at Tiffany's, Days of Wine and Roses, and two Pink Panther movies, Edwards' career hit the skids, beginning with the poorly-received Darling Lili. S.O.B. is a send-up of Edwards' experiences making that film, which was beset by studio interference and recut before release without Edwards' permission. In S.O.B., suicidal producer Felix Farmer (Richard Mulligan) tries to save a dog of a picture by turning it into an erotic musical in which Felix's wife, the Julie Andrews-like Sally Miles (played by Edwards' wife, Julie Andrews) will shatter her wholesome image by appearing topless. When this seemingly-terrible idea starts looking like it just might work, the studio begins to meddle. Felix dies in the fight to save his film, which ends up being highly successful. Sally, now widowed, wins an Oscar.

This Coen Brothers film is more about writing movies than filming them – and it's really more about not writing than writing. Protagonist Barton Fink (John Turturro) arrives in Hollywood after some success in the New York theater world; a studio executive gives him his first assignment: “A Wallace Beery wrestling picture.” Time goes by and Barton cannot get more than a couple lines into his script. Intrigue swirls; there's a serial killer on the loose and Barton's experience meeting a broken-down novelist (based on William Faulkner) is hardly inspiring. Barton Fink ends with a macabre flourish that might have been avoided if Barton had simply done the job he was hired for. As the studio man says, “Wallace Beery. Wrestling. What do you need, a road map?”

Considered the ultimate tribute to the challenges of indie filmmaking, Living in Oblivion tells the story of a director, Nick Reve (Steve Buscemi), who is trying to shoot a scene between his lead actors, Nicole (Catherine Keener) and Chad (James LeGros). The shooting's takes and retakes are plagued by basic errors: The mic boom is visible, or the camera is out of focus, or the actors disappear when they stray from the lights. The film is remarkably effective despite being largely composed of dream sequences; when we finally get to Nick filming a real scene it turns out to be a terribly clichéd dream that includes a dwarf (Peter Dinklage) holding an apple. “I don't even have dreams with dwarves in them,” Dinklage's character tells Nick.

In this French film, Jean Pierre Léaud plays a director who's lost his edge and is convinced he can  return to greatness with a remake of Les Vampires, a French silent serial from 1915. To put an unmistakably modern spin on this version, the director casts Chinese megastar Maggie Cheung (playing herself) in the lead and outfits her in a sexy latex catsuit. Cheung is shell-shocked and lonely in Paris; to her, the project seems to be a train wreck and the director seems to be going insane – or is that just how they do it in France?

The best way to get a convincing monster movie performance? Hire a real monster. That's one lesson of Shadow of the Vampire, a fictionalized account of the making of F.W. Murnau's 1922 expressionist vampire movie Nosferatu, eine Symphonie des Grauens. Murnau is played by John Malkovich, and his star, a supposedly obscure stage actor named Max Schreck, is played by Willem Dafoe. From the get-go, the filming of Nosferatu is even spookier than expected: Schreck never appears out of character, nor does he socialize with the rest of the cast. Murnau has all crucifixes removed from the hotel where the actors are staying, and the production's food stores include a bottle of blood. It soon becomes clear that Schreck is not playing a vampire; he is a vampire who's made a deal with Murnau, who resolves to finish his film even if it kills his cast and crew.

And Starring Pancho Villa as Himself (2003)

War is hell – it's also expensive, a fact Mexican Revolutionary Pancho Villa knew all too well when, in 1914, he sold the film rights to the his upcoming battles against Mexican government forces. This is a fact of history, although the resulting movie, The Life of General Villa – part fictionalized drama, part war documentary – is considered lost. In And Starring Pancho Villa as Himself, Antonio Banderas plays the titular revolutionary, trying to fight a war in the real world while experiencing creative differences with the industry professionals who are paying good money to film it.

Melvin Van Peebles, Mario's dad, made one movie of consequence, Sweet Sweetback's Baadasssss Song, a film about a black man rebelling against white authority that drew on serious issues of the day (the Black Panthers were its biggest fans) while paving the way for the blaxploitation genre that flourished in the '70s. In BAADASSSSS!, Mario stars as his father, and the struggles of a talented black director trying to follow his own vision at the dawn of the '70s parallel those of the film Melvin ended up making on his own (albeit with much less violence).

In For Your Consideration, master mockumentarian Guest, the man responsible for Waiting for Guffman, Best in Show, and A Mighty Wind, takes on the rumor-prone film industry. Almost all of Guest's favorite actors (including Bob Balaban, Eugene Levy, Catherine O'Hara, and Fred Willard) come together to tell the story of a terrible movie that somehow gets the reputation of Oscar-worthiness while it's in production. The glimpses of Home for Purim, the movie-within-the movie, reveal it to be dreadfully sentimental and cliché-ridden, yet the buzz building around it is relentless. The studio, sensing it has a hit on its hands, worries that it’s “too Jewish” and decrees it be rejiggered as Home for Thanksgiving. The cast of washups and hacks find themselves doing press appearances – badly. For any viewers who've ever felt suckered by awards-season hype, For Your Consideration is sweet revenge.

In the blockbuster business, you're only as good as your box-office receipts, and Tugg Speedman (played by Ben Stiller and modeled loosely on Sylvester Stallone) isn't the bankable star he used to be. But he thinks he's onto a career-redeeming film with the movie adaptation of a Vietnam veteran's memoirs (called Tropic Thunder). A cast is assembled that includes Kirk Lazarus (Robert Downey Jr.), an award-winning method actor who chooses to undergo skin pigmentation treatment to play a black GI, and Jeff Portnoy (Jack Black), a funnyman with a drug problem in the mold of Chris Farley or John Belushi. The production is to shoot on location in Southeast Asia, but the rookie director has no control over his cast, and in a desperate move drops them into the jungle armed with blanks; they are to fight their way through staged conflicts and rigged explosions while hidden cameras capture the action. But it turns out that the production's location is within a major heroin-producing region, and the actors are going up against real drug lords. If only they knew…