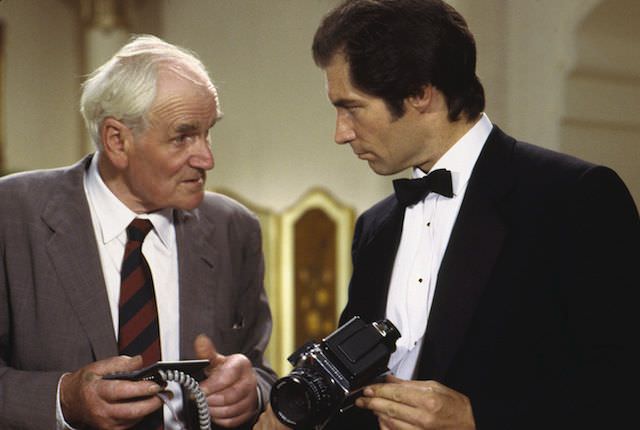 Before There Was Apple, There Was Bond (And Q): 50 Years of Impeccably Cool Gadgets

The James Bond movie franchise celebrates its 50th birthday this year, and the world’s favorite secret agent will blow out the candles with the Nov. 9 release of Skyfall, the 23rd Bond film. The old saying goes that behind every great man is a woman, but there’s one enduring character who is arguably more helpful than Bond’s scantily clad femme fatales: Q. One trailer for Skyfall shows Bond (Daniel Craig, in this incarnation) being presented with a gun featuring a palm-print identity checker so that it can only be fired by the man with a license to kill. Of course, the super-sophisticated weapon is the brainchild of Q (newly portrayed by Ben Whishaw).

Bond’s history with gadgets is just as long (and fraught) as his relationship with Q. In the very first Bond film released by EON Productions, 1962’s Dr. No, the armory master who would eventually evolve and become Q appears briefly: Peter Burton hands Sean Connery, the original Bond, his now-signature Walther PPK handgun ahead of a mission.

Mark Stout, a historian at the International Spy Museum, said that Bond’s gadgets
are so intrinsic that they might as well be a character in the movies.

“The most important thing about Bond is that he’s cool and resourceful and he has the perfect technological tool available to him at all times,” Stout, who helped curate the museum’s upcoming exhibit on Bond villains throughout history, said. “A lot of times, the sorts of tech and gadgets that show up are either flat-out fictional — like invisible cars, for instance — or ahead of their time. There’s a mix of fiction and reality.”

Though 007 always seems to have something handy to suit the sticky situations he inevitably finds himself in, the reliance on gadgets varies by film, and indeed by Bond as well. Alan J. Porter, author of the upcoming book The James Bond Lexicon noted that some iterations of Bond are more reliant on Q’s toys than others.

“The gadgets really became prevalent with You Only Live Twice, with the gyrocopter and everything — that’s when it really started to take off in terms of the gadgets,” he said of the 1967 Connery film, the fifth in the series. “But in the Daniel Craig era, they sort of did away with all the big gadgets and they had a couple of small ones.”

In recent years, for example, Craig’s Bond mostly relies on a palm-sized Sony Ericsson cell phone tied into the MI6 mainframe, with facial recognition capabilities. In contrast, Pierce Brosnan, one Bond incarnation earlier, made use of a ballpoint pen that deploys a grenade when clicked rapidly, a leather belt concealing rappelling wire and a ski jacket that doubled as a Kevlar-lined escape pod when things got hot. The stripped-down Bond of Skyfall is decidedly more utilitarian than, say, Roger Moore as 007 in A View To A Kill, who came prepared with an electric razor that doubled as an eavesdropping device. Of course, Moore also had facial recognition with his so-called Identigraph machine in 1981’s For Your Eyes Only — though the technology wouldn’t become a plausible reality for nearly a quarter-century.

But don’t hold your breath for some of Bond’s other toys to become commonplace.

“His jet packs for instance, in Thunderball, don’t rush out to get your own,” Stout said. “His little underwater rebreather that he uses in Thunderball, sort of the size of a real thick pen or pencil that he grips between his teeth to get oxygen, ain’t no such thing.”

No matter the toys, the car or the cut of the suit, the experts agreed that 007 would endure far into the future because of the man himself. "The character of Bond has a power that translates across cultures," Seitz said. "You can be Japanese, you can be from Zimbabwe, Scandinavia, anywhere, and the idea of this cool dude who can get out of any situation and do anything is going to be appealing because he’s a dream figure."

"Here’s James Bond fending off like 400 guys with a pen knife. That’s appealing because he’s everything that I’m not."