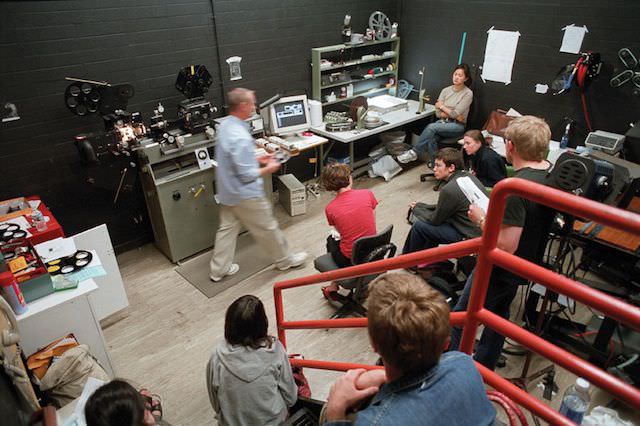 Back To Film School: On Location At CalArts

Across the country, aspiring filmmakers are hard at work honing their craft at film schools. Whether it's learning about the cultural impact of cinema, getting a technical training education in directing or cinematography, or advancing a lifelong love of cinema, we're celebrating film schools everywhere with a week of film school-themed content.

The Credits recently traveled to the California Institute of the Arts–one of the country's premier arts schools located just outside of Los Angeles. Started by Walt Disney in 1961 as a destination for artists, CalArts boasts a renowned film school, with notable alumni including directors Tim Burton, John Lasseter, James Mangold, and Genndy Tartakovsky.

Walt Disney's vision in creating CalArts was to establish a college dedicated strictly to honing artistic talent, and it's this commitment to craft that has made the school a top destination for students looking to enhance their film and video training. And, of course, being within a short drive to Hollywood doesn't hurt either! So we took to the CalArts campus to get a first-hand look at some of today's aspiring filmmakers hard at work.

The Credits spoke with four film students, Nijla Mumin, Sonja Bertucci, Amanda Candler, and admissions counselor and former student Andrew Ahn, about their experiences at film school, what they love most about cinema, and what they're currently working on. We also sat in on a few film classes and toured the campus for a look behind the scenes at one of today's most exciting film schools.

You can find more information about the Film and Video School at CalArts here, and for more on Walt Disney's involvement in creating CalArts, check out The CalArts Story video.

**Image courtesy of California Institute of the Arts