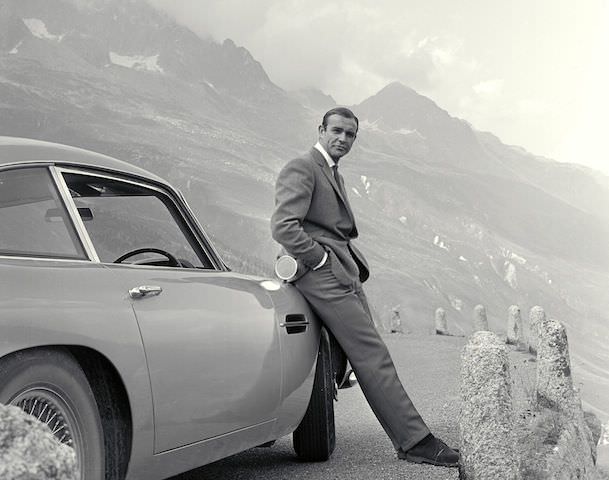 Last week marked the highly anticipated arrival of BOND 50 – the complete James Bond film collection showcasing all 22 classic titles on Blu-ray together for the first time ever, in one sleek collectable box-set. This Limited Edition set marks the debut of nine James Bond films previously unavailable in high definition Blu-ray and comes with a dossier of more than 122 hours of bonus features

Bond’s impact on our culture is such that the Museum of Modern Art in New York City is saluting her majesty’s favorite spy (for the second time, no less) with a month-long retrospective of all 22 films, from October 5-31, kicking off with a screening of Dr. No and working through the rest of the films in chronological order.

To celebrate one of the most iconic film series in history, we collected 50 things to love about James Bond—and full disclosure: narrowing our favorites down to 50 was one tough mission:

50) For the masochist in us all – Janus crime syndicate agent and cigar smoking femme fatale Xenia Onatopp, played by Famke Janssen in GoldenEye (1995).

49) Kerim Bay, the genial MI6 Head of Station T, Turkey. Bond’s (Sean Connery) ally and partner while in Istanbul. Kerim Bey only employs his sons in key positions, as he trusts only family. And James Bond. In From Russia With Love (1963).

48) The creepily comedic criminals Mr. Kidd and Mr. Wint in Diamonds Are Forever (1971).

47) What would Freud say? – SPECTRE agent Rosa Klebb (Lotte Lenya) viciously kicks at Bond with her venom tipped boot knives in From Russia With Love (1963).

44) Carly Simon’s title song to “Nobody Does it Better,” the only Bond theme song not to share a title with its film in the The Spy Who Loved Me (1977).

40) The ridiculously cool Aston Martin V12 Vanquish, equipped with an adaptive camouflage cloaking device that makes it invisible, in Die Another Day (2002).

39) The pun-master—When his foe is turned into red confetti in a snow blower, Bond (George Lazenby) quips “He had a lot of guts” in On Her Majesty’s Secret Service (1969).

38) Daniel Craig dispatching Dyden’s contact in a bathroom with his gun after nearly drowning him in the toilet, alerting us to a much darker, consequence-laden world for Bond in Casino Royale (2006).

37) The plotline revolving around the missing U.S. Space Capsule that mirrors the real world’s growing wonder with the space race in You Only Live Twice (1967).

36) Bond’s (Roger Moore) sort of hilarious fight with Mr. Tee Hee and his mechanical pincher-arm in Live and Let Die (1973).

32) Best Exit scene: Goldfinger’s henchman tricked by Bond into ejecting himself from the Aston Martin DB5 by pressing the ejector seat button in Goldfinger (1964).

31) Concise and to the point villainy by Auric Goldfinger, who has Bond (Connery) tied to a table with legs splayed, whilst a laser slowly cuts said table in half: Bond: “Do you expect me to talk?” Goldfinger: “No, Mr. Bond, I expect you to die!” in Goldfinger (1964).

30) The groin portion of the countdown continues: “I am aiming precisely at your groin. So speak now, or forever hold your piece!” The Man With The Golden Gun (1974).

29) The shockingly softer side of Bond in the final scene of On Her Majesty’s Secret Service (1969).

27) The suspenseful, sad death of Aki while sound asleep in You Only Live Twice (1967).

25) The fight that set the bar for all films to follow, SPECTRE agent Red Grant versus Bond (Connery) on a train in Europe (A gun! A trick briefcase filled with poison gas! A watch fitted with piano wire for strangling!) in From Russia With Love (1963).

24) Bond Girl, a bikini and a knife—Halle Berry looking good enough to die for emerging from the ocean in Die Another Day (2002).

23) Perhaps the most heart wrenching death in the series—Tracy Bond is murdered by Blofeld while on her honeymoon with Bond (George Lazenby) in On Her Majesty’s Secret Service (1969).

22) Nancy Sinatra’s husky voiced title song You Only Live Twice in the movie of the same name (1967).

21) The mysterious reappearance of Baron Samedi on the train at the end of Live and Let Die (1973).

20) Dent tapping into our collective arachnophobia by releasing a tarantula into Bond’s bed in Dr. No (1962).

14) The world’s greatest firearm for the world’s second greatest assassin: Francisco Scarmanga’s Golden Gun, played by Christoper Lee, constructs his assassin’s tool out of four common accessories carried by gentlemen of leisure, or writers: a solid gold fountain pen is the gun barrel; a solid gold cigarette lighter is the gun’s hammer and bullet chamber; and a solid gold cuff link and cigarette case are the trigger and magazine, respectively. Like all good writers, when not writing or smoking, he’s killing.  The Man with the Golden Gun (1974).

11) The original Bond Girl with a bikini and knife—Ursula Andress, the very first Bond girl, emerging from the sea in a dreamy white bikini in Dr. No (1962).

8) Best entrance by a Bond villain: head of SPECTRE Ernst Stavro Blofeld played by Donald Pleasence, turns his chair around to reveal himself to Bond in You Only Live Twice (1967).

7) Goldfinger’s henchman Oddjob, played by Harold Sakata. Chauffeur, bodyguard, golf caddy, assassin. He wears many hats, including one with a razor disc in the rim to decapitate his victims, Goldfinger (1964).

3) The astonishing opening fight sequence between Bond (Daniel Craig) and Mollaka as they run-and-fight through Madagascar (it’s called parkour, or free running) in Casino Royale (2006).

1) The coolest introduction of a major character in film history: