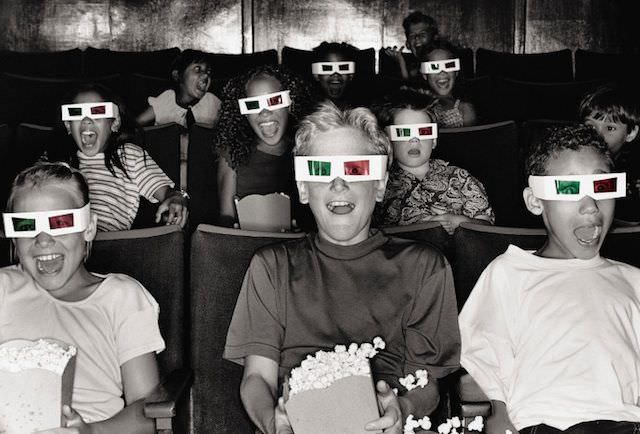 The Return of Smell-O-Vision, the Advent of 4D Cinema, and the Brave New World of Sensory Film

TIME Magazine might have deemed it one of the worst 100 ideas in history, but it’s hard not to harbor a fond nostalgia for the wonderfully bizarre promise Smell-O-Vision once afforded moviegoers. Making movies that smelled was a bold and definitively quirky concept intended to persuade the television-hooked masses of 1950s Americana to migrate from their plastic-covered couches and microwaved TV dinners in order to experience movies in a ‘scent’sational new way. Of course, putting it into practice wasn’t so simple: Smell-O-Vision and other olfactory stimulating processes like it were expensive, faulty and downright weird. And yet, what may have seemed like a concept as cursedly kitsch as the beehive hairdo, Smell-O-Vision and other sensory-enhancing movie-going experiences are making a comeback.

Despite ongoing difficulties implementing scent with film in the last century, several movie theaters did employ aromatic enhancements—whether it was wafting rose oil during newsreels of the Rose Parade to implementing complex (and pricey) automated scent-delivery systems to individual theater seats. Even the more practical act of doling out scratch-and-sniff cards was implemented in theaters as recently as 2003. And they weren’t just novelty—scented films were championed by iconic movie masterminds, including Walt Disney and John Waters.

Still, there were drawbacks. Complaints of hissing noises from the release of smells, to delays in delivery, to the loud and distracting inhales of a theater full of noses seemed to seal Smell-O-Vision’s fate as having been little more than a pipe dream.

Well, until now, that is.

Fear not: sensory cinema is back—and it’s set on satiating more than just your nose. Today’s ambitious sensory-infused movie endeavors aim to enhance the theater-going experience on all fronts.

Theaters across the world have long been experimenting with sensory-heightening features—especially live musical score accompaniments. Extra Sensory Cinema, a UK-based screening group, pairs movies with live DJs whose work is inspired by or involved with the film. Canadian director Guy Maddin incorporated sensory-enhancing cinematic features to accompany his silent film Brand Upon The Brain!, which premiered at the Toronto Film Festival in 2006 with a live narrator, foley artists and performances by members of the Toronto Symphony Orchestra.

And taste isn’t off the table: London’s Electric Cinema hosted what might be the first-ever ‘Edible Cinema,’ which coordinated movies with snack offerings to further enhance the sensory synergy between screen and theater seat. But these are paltry in comparison to what’s on the horizon.

Simnoa’s ‘4D Cinema’ is set to descend on 200 American theaters in the very near future. And 4D Cinema is a sensational assault on the senses. Soon, theaters will be equipped with fully functioning ‘smell-o-vision,’ back ticklers, strobe lights, smoke, and water sprays to make you feel a movie like never before. Going to the movie theater might soon resemble a full-on amusement park ride:

Simnoa has already garnered attention in South Korea and Mexico, where 4D cinemas are in full swing. The company is hoping to work with stateside studios on enhancing the viewing experience for major blockbusters in mainstream theaters—just imagine The Avengers or Avatar with moving theater seats, personal sound speakers and time-released smells, lights and air. Similar technology has been available exclusively at U.S. theme parks (think: Universal Studio’s Back to the Future ride), but that’s changing—rapidly.

And if 4D has your head whirling, you might want to sit down, because talks of 5D and 6D are already commonplace amongst movie theater technology aficionados. So don’t be too surprised when you find your local theater has transformed into a spectacular, free-wheeling cinematic tour de force; the game-changing advancements in sensory cinema have only just begun.