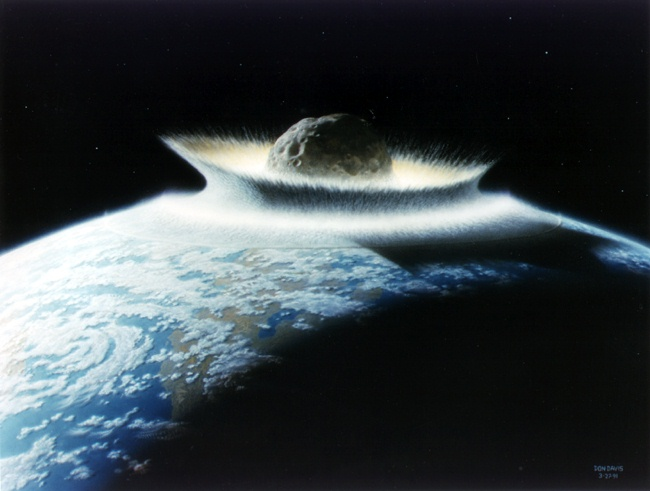 Getting the End of the World Right: Astrophysicists Weigh in on Their Favorite Asteroid Disaster Movies

A young boy gasps in the dark as the asteroid plummets towards Earth, spelling certain death for everyone he knows and loves. Like those around him, he is transfixed by the notion of his own imminent obliteration. He begins pondering the uncertainty of time, of existence, of the scope of human imagination. He shoves another handful of popcorn into his mouth, chewing furiously, as these ideas take root.

It could be anyone, but in 1953, this boy was Seth Shostak, and he was watching The War of The Worlds. Now a senior astronomer at the SETI Institute, a nonprofit organization dedicated to scientific research, education and public outreach, Shostak says, “I think the fact that I’m sitting at this desk here today is largely due to George Pal’s movies.”

For many astrophysicists, astronomers and other expert space junkies, sci-fi films first ignited their passion in all things extraterrestrial, and most still pledge allegiance to the genre. But the biggest fans are often the toughest to please. Even as they line up around the block for tickets, they can’t help but roll their eyes as spaceships break the laws of physics or asteroids behave like soccer balls.

Take, for instance, Armageddon. Few could argue that the story wasn’t compelling: it ended up being the highest grossing film of 1998. But could it really happen? Not likely. Scientists already know about any large rocks that could potentially smash into us, which means we’d have about 10 to 20 years warning if one of these asteroids seemed to be bee-lining for the earth.

Plus, “Blowing up an asteroid the size of Texas is not the right way of going about disposing of a colliding object,” says Jason Dworkin, chief of the astrochemistry laboratory at NASA’s Goddard Space Flight Center and a project scientist on the OSIRIS-REx mission. If we did make that misadvised decision, the Earth would be pelted with a bunch of Connecticut- and Maine-sized rocks, and the superheated atmosphere would cook us alive. Realistically, scientists would deflect the asteroid’s trajectory by sending a rocket up to disrupt its gravitational pull.

“Sometimes a new space movie comes out and everybody in my lab gets together to see it and then tear it apart afterwards,” jokes Scott Sandford, an astrophysicist at NASA’s Ames Research Center. But he usually allots movie directors at least one big premise freebie, he says, like assuming that spacecrafts can fly faster than the speed of light or allowing them to go “whoosh” when they zoom by. Gregory Vogt, co-author of The Astronaut’s Cookbook and an assistant professor at Baylor College of Medicine, admits that once he stops analyzing the science in Armageddon, “the movie becomes fun to watch.”

Deep Impact, another end-of-the-world disaster movie of 1998, is more palatable to many experts. “That was the least objectionable of all asteroid movies,” says NASA’s Dworkin. In the movie, an amateur astronomer reveals the asteroid threat to the world, which “illustrates how it is not possible for any government to conceal objects in space, that the sky is open for everyone,” Dworkin says. “The film shows the huge value of amateur astronomers.”

Even though scientists may not be able to help nitpicking the science, they also appreciate when Hollywood puts in the extra effort to get it right. Most agree that 2001: A Space Odyssey ranks highly on their list of favorites. Stanley Kubrick consulted astronauts and experts in making the film, and it shows. Charles Bourland, the other co-author of The Astronaut’s Cookbook, once used scenes from the movie when teaching a class at the University of Houston on living and working in space.

Dworkin commends the film for its portrayal of the lighting in space, and Vogt appreciates the idea of the rotating spacecraft, though he points out that now we know that astronauts “zip around” in spaceships rather than slowly float from point A to B.

James Cleaves, an organic geochemist at the Blue Marble Space Institute of Science, appreciates that in 2001 the science and technology fade into the background in favor of the more compelling human story. “In 100 years, our technology will change but people will still be people,” he says.

Accurate or not, sci-fi films “are like crystal balls” that allow viewers to look into a possible future, and as such “they will forever have appeal,” Shostak says.

And as the researchers attest, the greatest contribution of space movies may be that they “get people excited about the program,” Vogt says. “Everybody wants to be an astronaut.”