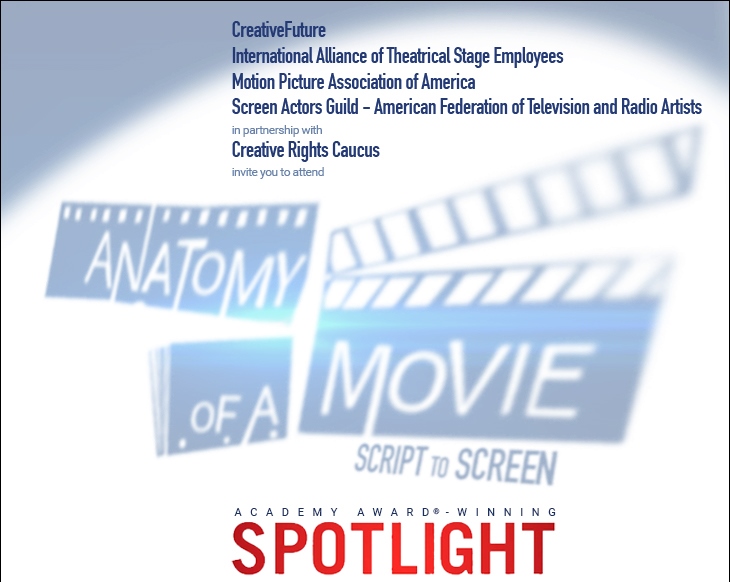 How do your favorite movies and television shows make their way from the pages of a script – or even from one person’s brain – to the big screen? At an impressive panel on Capitol Hill yesterday, members of the cast and production crew of the Academy Award-winning film “Spotlight,” along with some of the real-life journalists portrayed in the film, sought to answer that question.

For the second year in a row, I was delighted to join Representatives Judy Chu and Doug Collins, the co-chairs of the Creative Rights Caucus, at the aptly titled “Script to Screen” event.  Organized with the help of CreativeFuture, IATSE, and SAG-AFTRA, yesterday’s event offered a behind-the-scenes look at a vibrant sector of the American economy that is responsible for nearly 2 million American jobs, while providing a variety of perspectives on the long, often complex process of bringing great stories to life.

In the case of “Spotlight,” a film that tells a very important story, it took nearly 14 years.

The discussion also reiterated a case that I try to make at every opportunity – the sheer number of men and women it takes, at every step of the process, to create the incredible movies and TV shows loved by audiences around the world. As Orson Welles once remarked, “A writer needs a pen, an artist needs a brush, but a filmmaker needs an army.” That army, of course, includes actors, directors, producers and screenwriters – many who are household names – but it also includes make-up artists, lighting technicians, sound engineers, caterers, and truck drivers, and countless others working behind the scenes who form the backbone of any production.

By bringing a bit of Hollywood stardust to the halls of Congress, I hope this event provided the lawmakers and staff members in attendance a greater understanding of the inner workings of this great American industry.