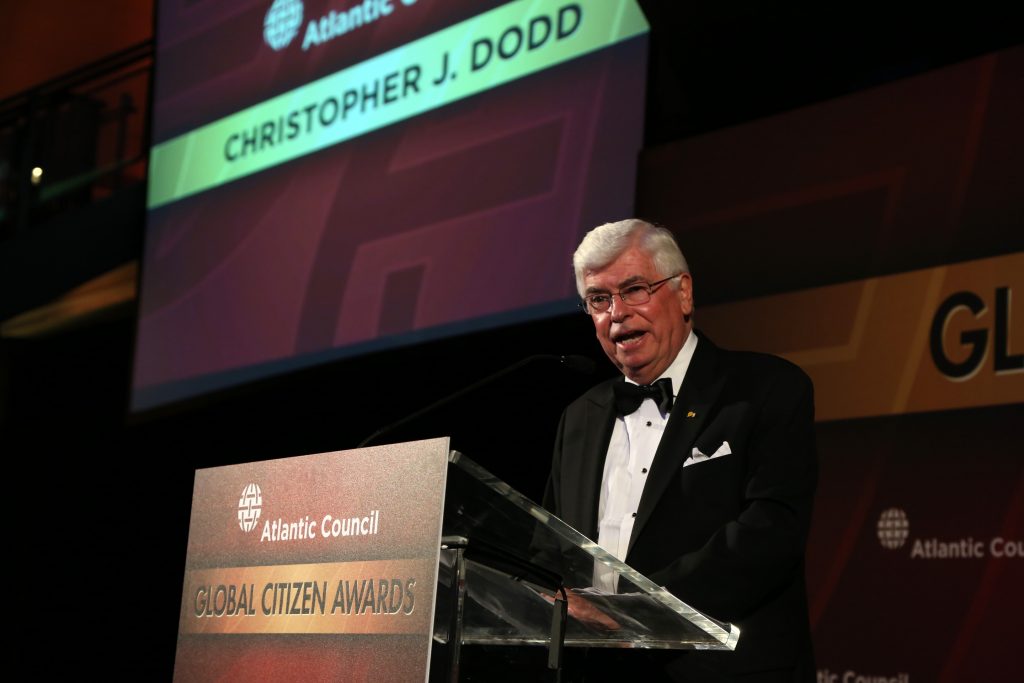 In recent years, Latin America, especially Mexico, has seen tremendous transformations.  With more than one billion dollars crossing the US-Mexican border in daily trade, the country stands as our fastest growing trading partner.  And, according to the United Nations Development Program, Mexico City is now one of the world’s main production centers of creative goods and services. So it was with great honor that I presented the Atlantic Council’s Global Citizen Award to President Enrique Peña Nieto of Mexico last night at a gala event in New York.

As someone who has devoted important periods of my life to Latin America, from my time as a Peace Corps volunteer 50 years ago in the Dominican Republic to my Chairmanship of the Subcommittee on Western Hemisphere of the Senate Foreign Relations Committee, I’ve had the privilege of knowing and working alongside some truly remarkable leaders – leaders of vision and passion, who sought to ensure their people and their country would prosper.  President Peña Nieto is one of those leaders.

Though he has been in office for less than 24 months, the ambitious reforms championed by President Peña Nieto are helping to push his nation along a path of growth and prosperity.  Mexico’s auto-manufacturing industry is thriving as Kia, BMW, Mercedes Benz, and others build new factories that create thousands of jobs. Foreign investment is growing and the Mexican Peso has strengthened against the dollar – the only currency in Latin America to do so. But in my mind, there are few better examples of this growing prosperity and opportunity than the Mexican film and television industry, which has seen a boom in recent years.

Today, this industry generates 42,000 direct and 12,000 indirect jobs — all working together to produce more than 100 thousand hours of television content and 126 Mexican films last year.  And with 257 million theater tickets sold last year generating 11.9 thousand million pesos in revenue, the Mexican people are flocking to theaters to see these great movies. But the fact is that millions of Hispanics around the world are embracing this content as well.  Right now, Mexican television shows are being translated into more than 30 languages and exported to over 100 different countries across the globe, and the movies created by Mexican filmmakers are being enjoyed by audiences in 41 nations.

Next month, much of the global film community’s eyes will be fixed on this nation and its film industry as filmmakers, actors, directors and others travel to participate in the Festival Internacional de Cine de Morelia.  As a speaker at this year’s festival, and as someone who has devoted a significant part of my career to issues affecting the people of Mexico, I look forward with great anticipation to seeing not only the tremendous growth taking place within this great industry, but to all of the wonderful changes occurring thanks to President Enrique Peña Nieto’s leadership.