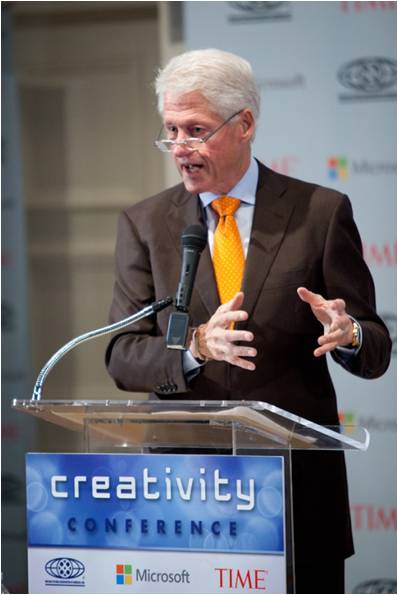 “There is a desperate need for creativity here in Washington,” said House Majority Leader Eric Cantor to open up Friday’s Creativity Conference, an event co-hosted by the MPAA, Microsoft, and TIME Magazine and intended to examine how technology and the creative arts are driving American innovation. “There is certainly a tradition of creativity in America. We are the creative capital of the world, and I believe it is the government’s role to provide a platform…for the growth of creativity.”

The four hour conference, held in the intimate Corcoran Art Gallery amphitheater, featured fascinating conversations on a range of issues from how technological innovation has shifted the consumer landscape, to the intricacies of the filmmaking process, to the role of creativity in the education system.

Both Harvey Weinstein, as a filmmaker, and Richard Plepler, as a subscription-television executive discussed the creative process and how they make creative decisions. Weinstein noted his particular interest with the process itself: “The creative process is in a lot of my movies…I’m fascinated with the process,” he said. He pointed out past films Frida, the 2002 biopic on painter Frida Kahlo, and Shakespeare in Love (1998) as examples of celebrating the creative process through characters in his movies. Similarly, but from a different angle, Plepler described his experience in working with creators and how his platform is able to make creative decisions on particular shows: “The secret sauce to the HBO culture is creating an environment where people can tell their stories.”

Former President Bill Clinton closed the conference with characteristically insightful remarks on the wide purview creativity covers in our everyday lives, and stressed the important of cooperation through creativity moving forward: “The future will reward most richly those who are creative and cooperative,” said Clinton, adding “we’ve got a lot to learn, and the creators have to lead us there.”

For a weekend that so closely ties the creative industry with the political arena, Friday’s Creativity Conference provided a venue to explore some of the substantive issues at the crux of these two worlds. To watch a replay of the full conference, click here.