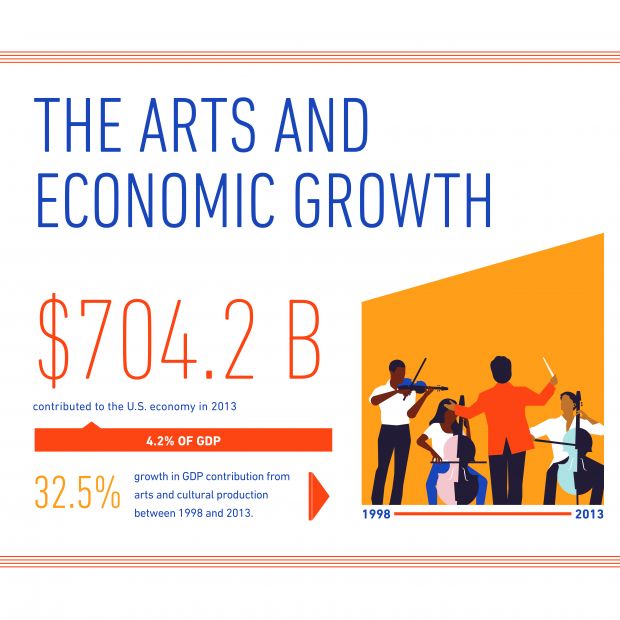 A new report from the National Endowment for the Arts (NEA) and the U.S. Bureau of Economic Analysis (BEA) highlights the significant and growing value of creativity to our nation’s economy. Arts and cultural production contributed a total of $704.2 billion to the U.S. economy in 2013, according to the report. Motion pictures alone were responsible for $100.1 billion.

NEA Chairman Jane Chu said, “This tells us that the arts remain a valuable and desirable commodity for U.S. consumers, and that the arts are a strong contributor to America’s economic vitality.”

The study also reveals that the various arts and cultural sectors – including motion pictures, performing arts, independent artists, advertising and graphic design, among others – experienced accelerated growth over the 15-year period they examined (1998-2013). During this time, the contribution to GDP of arts and cultural production grew by 32.5% or $165 billion, outpacing a number of high-grossing sectors like accommodations and food services.

A big part of this growth took place online. The fastest sector was “other information services” – a category that is comprised of online publishing, broadcasting, and streaming services – which grew at 12.3% on average annually, outperforming the 1.9% growth rate of the total U.S. economy. This tremendous online growth can be linked to the rise of availability in legitimate services for viewing content online. American audiences can choose from more than 115 services to legally access television and film content over the Internet, up from essentially zero in 1997.

The report also explains how our creative economy drives revenues through exports. It found that America’s creative industries have run a trade surplus that’s grown every year since 2006. Among the arts and cultural products measured, movies and TV shows were the top U.S. export in 2013.

Check out the infographic below for more on the report: