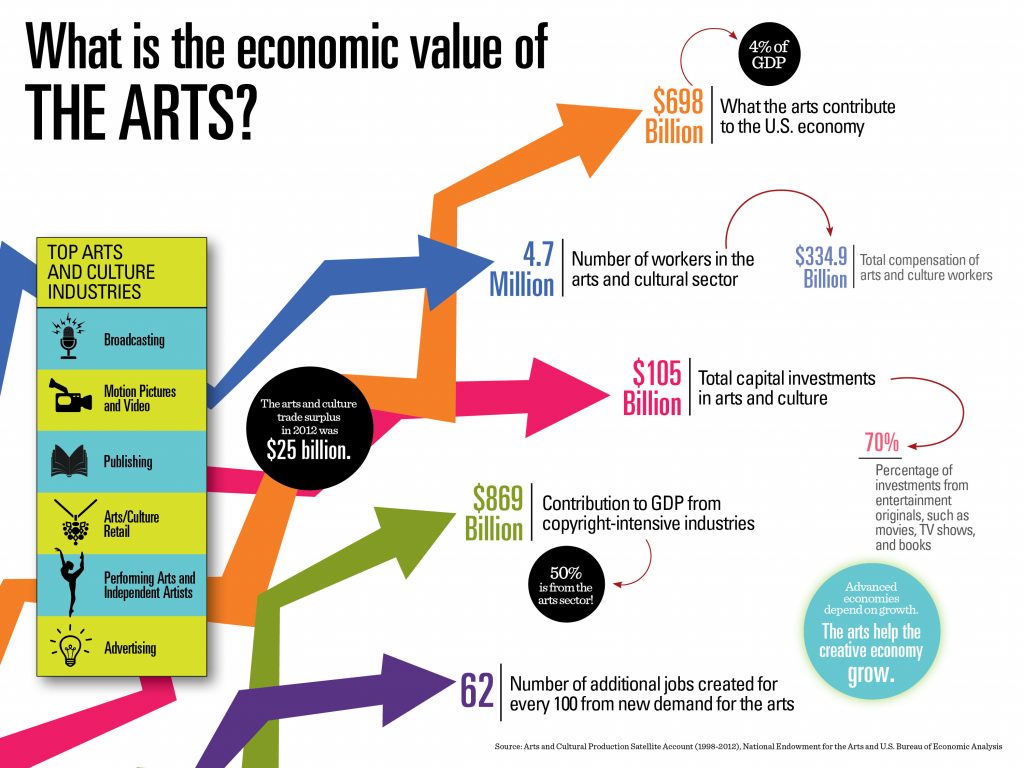 The creative industries in the United States are a major driver of economic growth, contributing $698 billion to the nation’s economy – about 4.32% of U.S. goods and services, according to a new report by the Bureau of Economic Analysis (BEA) and the National Endowment for the Arts (NEA).

These industries, including movie and television production, broadcasting, publishing, performing arts, advertising,  and retail sales employed 4.7 million Americans, generating $334.9 billion in compensation, and were responsible for a trade surplus of about $25 billion.

Secretary of Commerce Penny Pritzker stated that “with the creation of new data analyses like this one – which shows how arts and culture contribute to GDP – the Department of Commerce is providing a more detailed picture of what drives the U.S. economy, growth, and job creation.”

And what is driving a significant portion of our economy today is the production of creative and cultural content. Members of the creative community, myself included, have long made the case that these industries are a vital part of our nation’s economic well-being, and this announcement further proves that fact.

As head of the Motion Picture Association of America for the past four years, I have traveled all across this nation, seeing with my own eyes the incredible talent that exists within the film and television industry and the benefits this industry brings to communities everywhere.

And at every available opportunity, I have done what I can to promote those hard working individuals and the benefits they bring to our country. We are an industry that supports 1.9 million American workers every single day – writers, costume designers, make-up artists, stuntmen, set designers, lighting technicians, as well as the people who collect tickets and sell popcorn at local cinemas. We are an industry made up of over 99,000 businesses across the country, most of whom are small businesses employing fewer than 10 people. And we are an industry that has maintained a positive balance of trade in nearly every country around the world, which led to more than $16.2 billion in global exports in 2012.

The release of the BEA/NEA’s report reinforces the fact that beyond the important cultural and artistic contributions of America’s creative community, this sector is a major contributor to our nation’s economy – and one that will likely only grow in the years to come.

What’s the economic value of the arts in the US? #infographic http://t.co/zUG3x1efTs